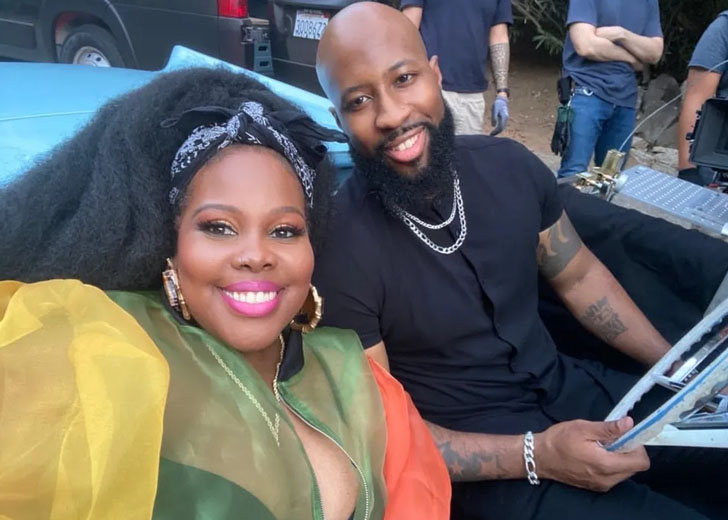 “My family loves him. Obviously, I love him,” Amber Riley on her fiance Desean Black.

It’s been almost one and a half years since Amber Riley, aka RILEY, surprised her fans with her engagement news.

She announced her engagement to boyfriend Desean Black in late November 2020 via an Instagram post. She had posted a picture and video of themselves. In the video, she was seen admiring her fiance from behind.

Afterward, she flaunted her engagement ring. In the caption, she wrote, “There was a time when I thought I didn’t want or deserve this kind of love. I’m looking at a man who changed my mind.”

“I love you @deseanblack_official and I thank you for your patience, your friendship, and your partnership! What God has joined together, let no man separate. #HappilyEngaged #Engaged #BlackLove,” Riley further added.

The actress’s fiance made the same post with an equally sweet caption. He started with, “Fellas, when a woman looks at you like this, it’s a clear indication that you’re doing the right thing.”

“Now, when she delivers unconditional love that you’ve never experienced, it’s another clear indication that you’ve found the one. Only a fool would let someone as special as this slip away.”

In the end, Black added that he did what any wise man would do and put a ring on it. “I love you to pieces @msamberpriley, or should I say the future Mrs. Black. #happilyengaged A king will always protect his queen,” he concluded his caption.

The couple had sparked romance rumors just a month before their engagement. Distractify reports speculations about their togetherness started after Black was spotted at Riley’s performance on The Terrell Show.

The couple made their love official sometime after the speculations started. After their relationship was confirmed, Riley posted a collage of a screenshot of her and Black’s first conversation and a cute picture of the duo via Instagram.

The first step in their conversation was taken by Riley, who had messaged Black by saying, “Hi Desean, how are you.” Black soon responded and wrote, “Hey beautiful. I’m doing great and you???”

Since then, the engaged duo has always been together and shared multiple snaps via their respective Instagram handles. However, fast forward to now, some fans have noticed that all of those pictures have been deleted.

Are Amber Riley and Desean Black still together?

After the fans of the Glee actress noticed that she and her future husband had deleted all of the pictures they had shared of each other on social media, they began to wonder if the couple was still together.

There were also questions like, “Did Amber Riley and boyfriend break up?” To those wondering the same question, the answer is: No, Riley and Black haven’t broken up, and they are still together.

There has been no news of the engaged couple calling off their engagement and walking down separate paths. Besides, she even talked a little about her relationship with her fiance during her exclusive interview with Page Six on January 25, 2022.

Additionally, Black had accompanied his partner to the premiere of Riley’s 2022 movie Single Black Female. Riley shared three pictures from that night on February 6, 2022, and her image with Black was at the end.

Amber Riley and her fiance Desean Black at the premiere of ‘Single Black Female’ (Photo: Instagram)

It indicates that Riley and Black’s relationship is still going on strong. As for why they deleted their pictures from social media, it remains unknown. Some might say the two are trying to keep their romance private.

It has already been mentioned how Riley and Black’s first conversation started. But how did they get to know each other?

Well, Black actually didn’t know Riley before they started talking. In an interview with xoNecole on November 30, 2020, she mentioned that she first found her future fiance thanks to the same outlet – xoNecole.

She was scrolling through xoNecole, and when she saw Black’s picture, she thought, “Oh my God, he’s such a handsome man.” So, she went on to follow him on Instagram but didn’t think about it until she saw his picture again on her Instagram newsfeed.

She messaged him – the same message mentioned earlier – and the rest became history. Additionally, she had stated that her relationship with Black was “the first relationship that I’ve been in that I feel is really healthy, and I love him to pieces.”

Furthermore, in another interview with Distractify in July 2021, Riley mentioned that she met Black during the pandemic, and she was the one who made the first move.

Amber Riley on her wedding with Desean Black

In an exclusive interview with People in January 2021, Riley opened up about her wedding plans with Black. She said, “Weddings have always been absolutely fun. I’ve gone to some amazing weddings. My mother’s an event planner.”

“I’ve been a flower girl so many times. So for me, the music has to be right. You’ve got to have a bangin’ DJ. And I know so many artists. I want both a DJ and a band. You’re celebrating bringing two lives together, celebrating love, celebrating a union.”

The American actress also stated that Black’s engagement proposal surprised her and that her fiance is a great man. “My family loves him. Obviously, I love him.”

She again turned her focus toward the wedding plans and said it was weird because they couldn’t plan anything due to the pandemic. But, she also stressed that she would marry Black in a backyard — with a wedding dress, of course.

Riley had also got candid about her wedding plans with her future husband in her above-mentioned interview with Distractify.

She first mentioned that she and her fiance are confident that they have found their “happily ever after” despite dating for a while only. As for a wedding, she said that they are taking their time.

As she went on, she stated that the couple had made plans to get married in 2022; however, the plans changed due to the COVID-19 pandemic.

She continued, “That’s my best friend in the whole entire world. And during the pandemic, we decided that we’re not going to pressure ourselves to figure this out. We’re going to wait until the pandemic is over, we were going to get married next year.”

In addition, Riley told the outlet that while she prefers a grand wedding, Black is going with the flow. She also said she is taking KeVita’s prebiotic shots to make her feel good, as wedding plans could be hectic.

Furthermore, in her recent interview with Page Six in January 2022, Riley mentioned that she is in no hurry to share the wedding vows with Black. “It’s probably going to be one of those things where we’re engaged for a really long time.”

“We’re in the middle of a pandemic, and it’s just, you know, there’s no rush for me, to be honest,” she further added with a laugh.

It seems like Riley’s fans would have to wait for a while before seeing the actress walk down the aisle. Let’s hope that it happens soon.