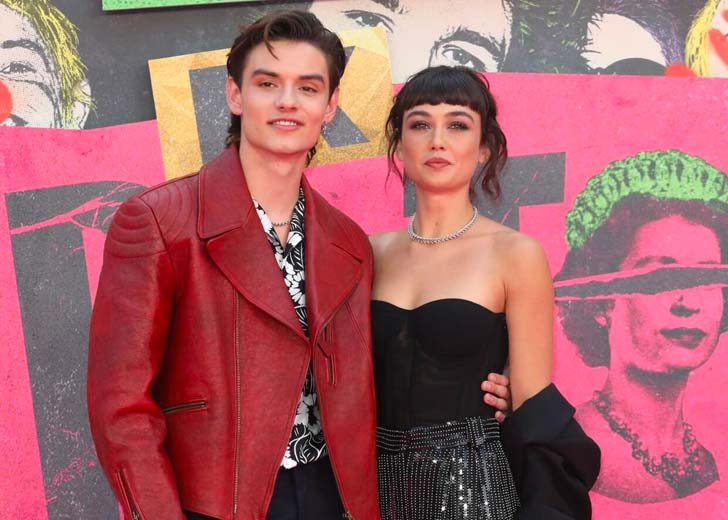 Louis Partridge is openly in love with co-star, Sydney Chandler.

Louis Partridge has risen to global fame with his beautiful performance in the Netflix movie, Enola Holmes, and Enola Holmes 2. Before that, he appeared in movies like Paddington 2, Amazon Adventures, and TV Series, Medici.

Besides, he also starred in a mini-series titled Pistol, where he met his girlfriend, Sydney Chandler. When they met, Partridge was just 17 while Chandler was 25, which made headlines for the age gap.

The fans freaked out knowing the age difference between the Enola Holmes actor and Chandler. The controversy got huge as fans attacked the actress online with comments calling her a ‘predator’ for falling for a younger man.

The couple met on the set of the mini-series Pistol, where Partridge, born in June 2003, played the role of young Sid Viscious, and Chandler, born in February 1996, portrayed the singer Chrissie Hynde.

At the time, there were rumors of him dating his co-star, Millie Bobby Brown. But, those rumors were untrue as Brown publicly dates the son of Jon Bon Jovi, Jake Bongiovi. Later, the young actor went public with his relationship with Sydney Chandler.

Moreover, there are rumors that Chandler waited till Partridge turned 18 so that they could date. Consequently, the couple fell in love and started dating after he turned 18 in 2021. After they filmed Pistol, they were found romancing in London and Los Angeles.

Besides, they have quite the chemistry and don’t seem to hesitate to take their romance public. Partridge is a supportive boyfriend to Chandler and seems happy to move the relationship forward.

Partridge also flew to Italy for the premiere of her movie,  Don’t Worry Darling. The lovely couple walked the red carpet together and were seemingly in love. The actor was smitten to see her in Venice, the city of love.

While the couple is happy and in love, some fans are enraged about their mismatched relationship. Some of the fans called out Chandler for “Grooming” Partridge before dating him when he turned 18.

On the other hand, some internet users called her a “predator” for eyeing a young man, on top of that, a minor. One of them wrote on Reddit, “She convinced him to dump his gf and has been taking him on holiday to isolated places and being rude to his fans.”

Some supported this thread, while some defended the beautiful couple. People have been calling their relationship “gross,” “disturbing,” and “groomed.” An Instagram user pointed out the fact that this wouldn’t have been such a big deal if the gender roles were reversed.

Nevertheless, the scandal is now dying out since he is 19 now, and their relationship is also a year old now. Just recently, they appeared together at the premiere of Don’t Worry Darling at the Venice Film Festival.