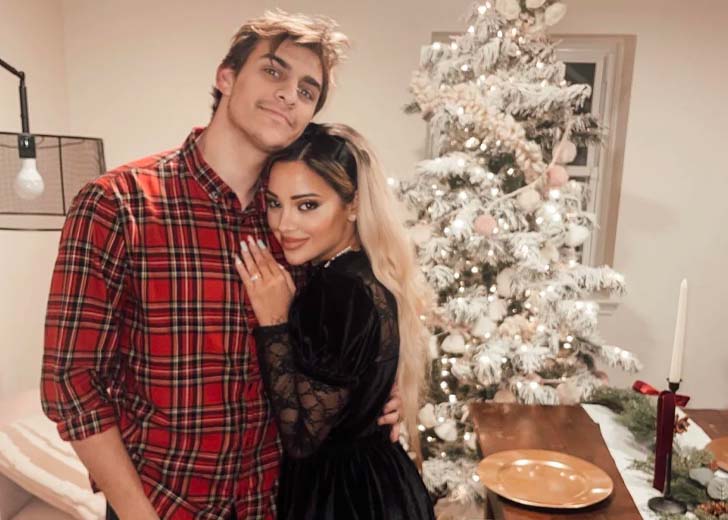 Know the reason behind the celebrity power couple’s split!

On a personal level, she was previously in a long-term relationship with her boyfriend turned fiancee Collin Vogt. The now-former couple began dating in July 2015 and made their relationship Instagram official on July 2016.

As their relationship continued, they began to share more of their romance among their well-wishers. Their bond seemed very strong, and in January 2019, they took a step forward by buying their first home.

Over a year later, in December 2020, Vogt went down on one knee and proposed to DeMartino — she said yes, and they got engaged. Everything seemed perfect in their relationship, and there were plans for the love birds to get married.

However, it seems as if the two weren’t meant to stay together forever, as they announced their split in May 2022, almost two years after they got engaged. So, if you’re one of those who are asking if “Gabi DeMartino and Collin are still together in 2022?” the answer is no, they aren’t.

On May 9, 2022, DeMartino took to her Instagram stories to give an update about her relationship with Vogt. She initially wrote, “hiii if you didn’t see my last vlog i definitely recommend watching it if you have any question or concern with my personal life and status.”

“I’m not directly discussing my personal matters in my life right now because the past four months of my life have drastically changed, and I’m giving myself time to adjust mentally,” she added.

As she went on, she mentioned that she was no longer getting married to Vogt, and “it’s been this way since the winter.” She also said that she was fine and was editing a vlog as she wrote the Instagram story.

DeMartino continued, “I can’t wait to talk to you then! love you and wishing you all an amazing Monday / week.”

On the same day, the internet star tweeted, “privacy is peace. not hiding anyone or anything; just not comfortable giving answers, and I don’t have to right now. 🤍 and that’s okay.”

As for what DeMartino said in the vlog she mentioned on her Instagram story, she stated that it was apparent something was going on in her personal life, which has been since that winter. She then said she wouldn’t talk about it until she felt right and didn’t owe an explanation to anyone.

She went on, “Basically what has occurred in my life has occurred for like three or four months now, and this life change is something that has really taken a toll on my personal life, and my entire life is my vlogs and is this channel, so I’m kind of sorting through those personal things before I bring them to the internet.”

DeMartino addressed her audience by saying they are “pretty smart and can put two and two together.” Additionally, she said that the topic is embarrassing and hard to talk about. “I just hope you guys could please focus on more positive things in the comment section.”

“I understand if you guys are confused and want an answer, but it’s not going to be this week. I’m really well, I’m great, and if you guys have any worry or concern for me, I’m doing really amazing, and you know, there’s good days, and then there’s bad days.”

That same week, the YouTuber addressed her split with Vogt in the comment section of one of her Instagram posts that featured pictures from her birthday party. “I am not hiding anything,” she first wrote.

“I have and will continue to keep my personal life to myself while continuing to live my life online. this right here is my life, and way back when deciding to have kept my break up private, I expected conclusions to be made,” she added.

Around the same time, Vogt also released a statement via Instagram. He said, “Hey guys! It’s been a few months of us keeping things private, but it’s time to tell you that Gabi and I mutually decided not to move forward with our wedding, and we are not together right now.”

He went into more detail and stated that he and DeMartino would initially use the word postpone as they didn’t know how to publicly announce their split as it was hard to deal with.

His statement continued, “But then there’s the audience. We still consider each other best friends, and we share an amazing animal family together. You will still be seeing all of us together online, but things have been different for a while.”

After mentioning that, Vogt clarified that neither of them cheated on each other, and nobody was hurt, as the decision to end their relationship was a “very thought out decision” that was best for both of them.

Vogt concluded his statement by writing, “We are not enemies, and there is no drama around this in our personal lives. The future remains unknown, and we would appreciate privacy during this gray area. Your Favorite! Collin.”

Around a month after announcing their split, DeMartino again addressed her split with Vogt in a new YouTube video, where she talked about the reason behind their split and why they weren’t going to share the wedding vows.

“I’m not getting married. I hope someday,” DeMartino said, after which she mentioned that she and Vogt had planned to get married in late May 2022. “The decision we made was the least dramatic thing possible,” she added.

“It was honestly just a rational decision; at that point in my life, not only was I getting cold feet, which I’ll touch base on in another YouTube video, but I was getting an extreme cast of cold feet. My job, career, and life path was like going this way; he needed to be home, and I needed to be out and about.”

DeMartino continued her story, “At the end of the day, we’ve mutually made the decision that we weren’t going to be getting married anymore. I’m the type of person that when I’m figuring stuff out behind the scenes, I don’t want to speak on things publicly.”

“I don’t want to put everything just out there right now. My life, my personal life, is very confusing. I know this happens to other people, but it’s even harder when I have a platform and a following.”

In the end, she acknowledged that many of her followers looked up to her relationship with Vogt, and she still admired their relationship because they were still best friends, and “that is fine.”