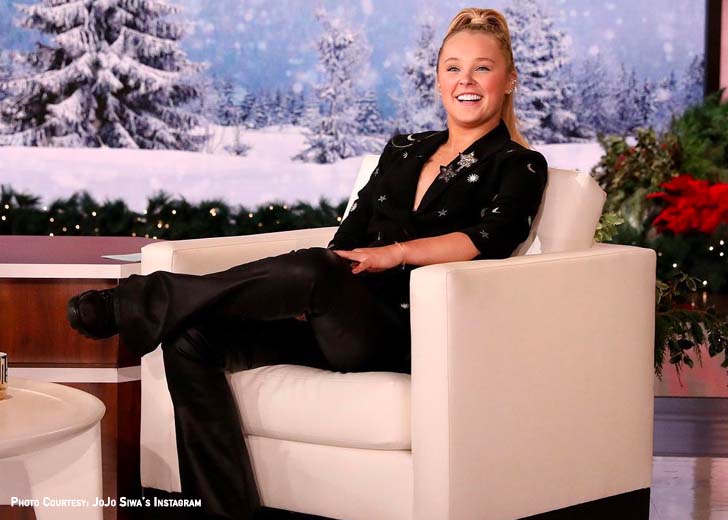 As of 2022, Dance Moms star JoJo Siwa is dating YouTuber and TikTok creator Avery Cyrus. The pair confirmed their relationship via TikTok after participating in a viral TikTok trend.

The star was previously in a relationship with social media influencer Kylie Prew but split after nine months of their relationship.

Prew confirmed their break up on Instagram Live and stated that while she and Siwa are no longer dating, there is no bitterness between them.

Siwa is currently dating Cyrus shortly after her breakup with Prew. The duo first appeared in public while dining at a fancy restaurant called Fleming’s steakhouse and vlogged their day for their fans.

She made her relationship public on September 13, 2022, by participating in the viral romantic TikTok trend.

The TikTok trend involved broadcasting a video of the seconds before a picture was taken together with the actual shot. Siwa and her girlfriend kissed at Chuck E. Cheese’s photo booth before posing for a picture.

On September 14, 2022, the pair made their red carpet debut. They went to the opening night of Jagged Little Pill at the Pantages Theater in Los Angeles.

Since confirming their relationship, Siwa and Cyrus have appeared on each other’s Instagram and TikTok trying various trends and challenges.

Cyrus is a TikTok creator with nearly 8 million followers in her TikTok. Since opening her account in July 2019, Cyrus has established herself as a well-known creative in the LGBTQ+ community and on the application.

In an interview with LATV Queer, she noted, “My pride is how I’ve learned to be super comfortable in my own skin because growing up, I was weird and gay and super tomboyish.”

She speaks openly about her sexuality, relationships, and emotions on TikTok. She also uploads lip sync videos, challenges, trends, and dance clips.

Cyrus is also a YouTuber, with her first video debuting in February 2017. Her TikTok videos and YouTube contents are similar and frequently engage with the LGBTQ+ audience.

Siwa and Prew started dating and made their relationship official in February 2021, one month after Siwa came out as a part of the LGBTQ community.

The couple first met on a cruise in 2020, and at the end of the year, they took a trip to Universal Orlando together.

During a holiday trip to Universal Orlando in 2020 with Siwa’s family, things between her and Prew started to get romantic.

The singer and dancer admitted to People that she had fallen in love with someone she had never anticipated doing so.

Siwa said, “We met on a cruise ship, she was my best friend. And then we went to [Orlando] together and all of a sudden. It kind of all happened.”

The two started dating on January 8, 2021, and disclosed the news only after a month to her fans. On February 8, 2021, the Dance Moms star Siwa made her relationship public via an Instagram post.

She captioned the photo, “I did it!! my human. It’s been 1 month since my best friend asked me to be her girlfriend, and it’s been the best month ever. I love you.”

In early November 2021, the dancer revealed that she and Prew had split up on Paris Hilton’s This Is Paris podcast. However, after a few months, in May 2022, Siwa and Prew got back together.

Unfortunately, the relationship ended after nine months of dating in June 2022. In an Instagram Live, Prew noted she and Siwa are no longer together.

Prew said that she and Siwa were “safe and happy and healthy and that’s all that matters.”