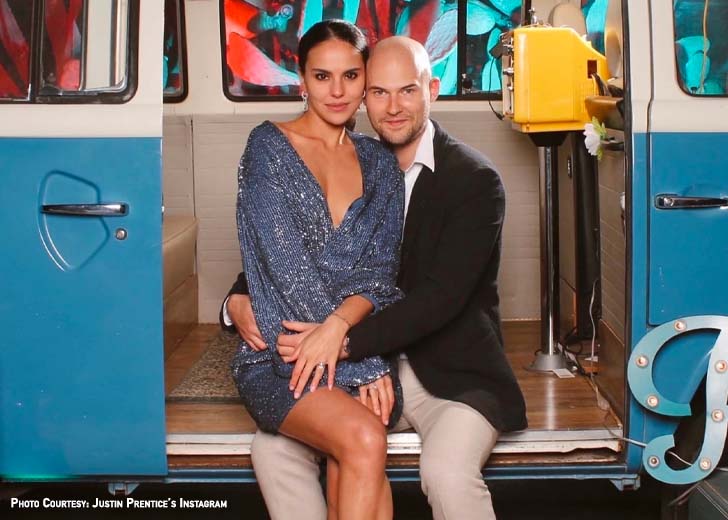 Justin Prentice exchanged vows with his Turkish girlfriend, Mirel Okumus, on July 2022 in the presence of his close family members and friends.

The wedding took place in Istanbul. Prentice remained hushed about his marriage while his wife shared their wedding news on Instagram over a month after the wedding ceremony.

The wedding took place on July 21, 2022, at Portaxe in Baltalimani. While the actor hasn’t announced his marriage, his bride shared the news on her Instagram almost a month after the wedding.

Okumus shared a series of pictures from her wedding day and wrote a sweet message, “21.07.2022. I’m so lucky to have an amazing human being by my side. I love you @justin.prentice.”

Prentice also commented on the photos saying, “I love you so much! You make everything 1000 times better, even these pictures.”

The newlyweds looked absolutely stunning on their wedding day. The bride wore an off-shoulder heart neckline fitted white wedding gown with her hair tied in a sleek bun.

The graduate of Istanbul Technical University Fashion Institute, Okumus flaunted her own design for her after-party ceremony.

Prentice, who played Bryce Walker, was in a relationship with German actress and model Annika Pampel. However, very little is known regarding their first encounter or how they started dating.

The pair were quite open about their relationship and used to express their love for each other by posting lovely pictures of them on their Instagram account.

The pair confirmed their relationship when they made their red carpet debut on March 30, 2017, in Los Angeles at the premiere of 13 Reasons Why.

Following year, on June 19, 2018, the pair shared a sweet kiss at the closing ceremony and Golden Nymph awards of the 58th Monte Carlo TV festival. The duo used to make several red carpet appearances together in the past.

As per Variety, Pampel and Prentice were also producing a movie together with the working title Odium. They also previously worked together on the short film called Crossing Fences.

After dating for a while, the relationship ended, and the reasons behind their split are still behind the doors.

Who is Justin Prentice?

Prentice is a renowned American actor best known for his role as Bryce Walker in Netflix’s teen television series 13 Reasons Why, based on the 2007 novel Thirteen Reasons Why.

The actor made his debut in the 2010 television series titled Criminal Minds, where he portrayed the role of Ryan Krouse. The same year he landed the role in Melissa & Joey and The Middle.

After a year, Prentice got an opportunity to star in Nickelodeon’s Victorious and iCarly. He has appeared in numerous series like Suburgatory, Marvin Marvin, Malibu Country, The Legend of Korra, Glee, NCIS, and Preacher.