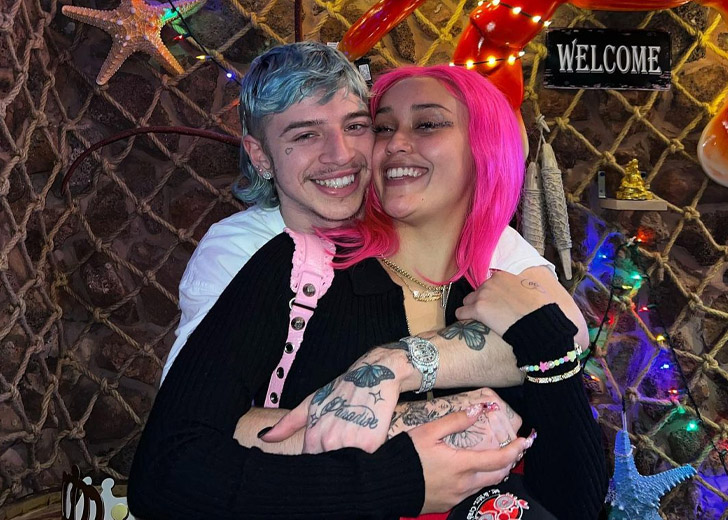 Icy Wyatt has been dating his girlfriend, Maizeng Usher, best known as Moir Maizeng, for a year.

Similarly, Maizeng is a content creator who often makes videos with her fiancé. The two often flaunt their relationship on social media.

Unlike Maizeng, Wyatt often posts pictures of his girlfriend and gushes about how much he loves her. Recently, he uploaded a photo with Maizeng and revealed that they had been dating for a year.

Here is everything we know about their relationship.

While Wyatt and Maizeng show off their relationship on the internet, they are relatively private and don’t share many details about their love life. It is unknown how the pair met and how they were introduced.

He called her the girl of his dreams and how kissing her felt “extra special” on the occasion of New Year because it was their first anniversary since they started dating.

He then reminisced how much they had achieved the previous year, like being engaged to one another. He confessed that he was proud to be her future husband.

In the end, he said, “So thankful for all of what this year has offered me and all the blessings that have came my way. Cheers to many more years with you, baby.”

It is unknown when the two got engaged, but Wyatt first revealed it in July 2022. He announced on Instagram that the two had just bought a Mercedes Benz.

In the captions, he wrote, “A new Benz just to sit up. Nah but fr thank you, god, for the blessing you have sent me and the journey you’ve guided me on. I’ve met an amazing women who’s now my fiancé, live in a beautiful home with multiple Benzyyyyz out front hallelujah!!!!”

The pair got engaged and have not tied the knot yet. However, Maizeng refers to her partner as her husband.

Controversies about their dating life

While Wyatt and Maizeng seem very much in love and enjoy their dating life, many question their relationship. Netizens have often complained about how the pair are not fit for one another.

Their love life is mostly discussed on Reddit. Many have noted that Maizeng seems to do drugs, and Wyatt does not care about his girlfriend.

Icy Wyatt has been dating his girlfriend, Moir Maizeng, for a year. (Source: Instagram)

Similarly, they recalled when the TikToker threw Maizeng’s clothes and stuff out of his house with the latter screaming. To make matters worse, Wyatt once bleached and destroyed his girlfriend’s hair, making it fried and dead.

As a result, many believe the pair should not be dating or engaged. However, Wyatt and Maizeng have not responded to such controversies about their relationship.

Alex Warren and Girlfriend Kouvr Annon Are Engaged — Inside Their Relationship

Everything about Comedian Dana Carvey, Wife Paula Zwagerman, and Their Two Kids