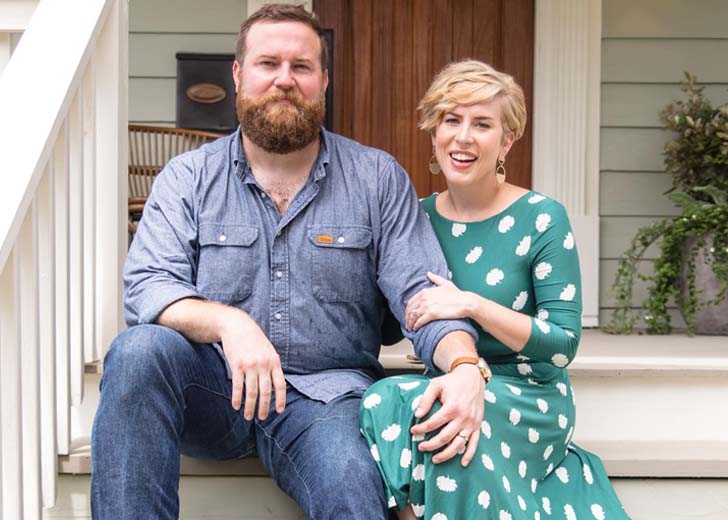 Erin Napier and her husband, Ben Napier, have been involved in revitalizing people’s homes in their hometown of Laurel, Mississippi, which could be seen on HGTV’s Home Town.

Now their show is expanding as they join hands with 15 renovation experts from other HGTV shows in the new Home Town spinoff series Home Town Kickstart. Those experts include Brian and Mika Kleinschmidt, Carmine Sabetella and Mike Pyle, Jasmine Roth, Alison Victoria, and more.

Home Town Kickstart has already premiered on HGTV, with its season premiere on Sunday, April 24, 2022. The Napier duo has a lot to do with a new show in hand. Fortunately, they have been doing this long enough and know their job very well.

Besides, they had started to put a new makeover in their hometown before even starring on HGTV’s Home Town. But what’s more fascinating than their professional lives is their togetherness — a relationship that started way early in their lives.

Here is a complete timeline of Erin and Ben Napier’s relationship!

The now-married couple first met each other while attending Jones County Junior College. In an Instagram post on December 12, 2019, Erin recalled the moment she met her future husband.

She wrote, “On December 7, 2004, @scotsman.co [Ben] and I met in our college yearbook room about the feature story we were writing about him. I was the design editor and for two years had noticed him, always the center of attention, everyone’s best friend, my biggest crush.”

“December 8, we took the photos for the yearbook. On December 9, we went on our first date and he met my mama. December 10, we looked at the Christmas lights in Mason Park. December 13, we decided we would get married someday.”

At the end of the caption, she mentioned what she wrote might sound crazy to some, but it made perfect sense to her. Later, the two transferred to Ole Miss [University of Mississippi] and graduated in 2007.

On September 21, 2007, Ben did his best to propose to Erin in the best way he could. Erin had later shared the whole story in her blog, and it goes like this:

“Ben asked me to come with him to Square Books so he could get a book for a class. It was his birthday weekend. My roommates said they needed to go there too and asked to come along. Ben went upstairs to ‘look for his book’ while I, Mallorie, Jennifer, Rebecca, and Josh browsed the books downstairs.”

“Jennifer handed me a little handmade leather-bound book and told me to read it. It was the story of an unlikely couple who met in college and fell in love fast. I had no idea it was about us at first. Then the couple began sounding a lot like us. Then it was us.”

After that realization, Erin was shaking and anticipating what would happen. When she turned the last page, it said to come upstairs if she wanted to know the rest of the story.

She walked up to the balcony where Ben was standing. “He took my hand and tried to speak, but he began to cry, and so did I. So he leaned down to my ear and whispered this: “You know how much I love you?”

The blog continued, “…And you know I will always take care of you…I talked to mammaw (my grandmother)… and in the words of James Rasberry, ‘I’ve got something for you.'” Then he got down on one knee and said, ‘Will you marry me?’

Erin couldn’t say yes enough or cry enough, and as per her, it was the most shocking and beautiful moment of her life. Her answer, in the end, was always going to be yes, which she said, and the two got engaged.

After their graduation, the couple had initially thought of never returning to their hometown. However, Erin and Ben had a change of heart and decided to return and make their hometown more appealing to themselves and other people.

Sometime after their graduation, they decided to legalize their bond. So, on November 22, 2008, Erin and Ben walked down the aisle to share the wedding vows in front of close friends and family members at the University of Mississippi’s Paris Yates Chapel.

On the couple’s 13th wedding anniversary, Erin shared some never seen pictures from her wedding day. She wrote, “13 years ago we became family then went to NYC for Thanksgiving.”

“Every year on our anniversary week, I’m so very thankful for you and the life we’ve made together. Thank you for loving me,” she added.

The couple is still going strong even after more than 13 years of marriage. Besides, Ben is still so in love with Erin that he writes some sweet letters every morning to his wife.

He told People, “Erin is my dream girl. Why would I not continue to court her and win her over every day? That’s always my goal.”

Around four years after their marriage, in 2012, Erin and Ben had already settled into their married life and fully completed several renovations on their house in Mississippi.

At the time, Erin was working as a wedding stationery designer, and Ben served as a youth minister. But after they completed the necessary renovations on their home, they decided to switch their career paths.

By June 2014, they had made a name for themselves in their hometown for their works in house makeover. The two gained more popularity after their works on their home was featured by Southern Weddings.

Those pictures eventually reached the eyes of an HGTV executive who started to follow Erin on Instagram. The executive was reported to be producer Lindsey Weidhorn who fell in love even more with the duo’s small town thanks to the #ILiveInLaurel hashtag Erin used.

Thus, Lindsey decided to reach out to the couple and pitched them the idea of filming a series in their hometown. Erin and Ben initially thought that Lindsey was in contact with them to buy stationery – they owned a stationery company at the time.

But they didn’t realize that Lindsey was trying to put them on television screens. Upon realization, Erin initially thought that the show wouldn’t be a big deal. “We didn’t think it would be possible,” she said in an interview.

“Why would it be possible to make a TV show in a town like Laurel, Mississippi? We love it very much, but that doesn’t mean everyone else would. So we had fun and never had any expectations.”

But, just three seasons later, her reaction had changed. She said, “I don’t think you can ever anticipate something like this. It is such a happy surprise.” And with the show’s success, Erin and Ben’s life has also changed tremendously.

Erin had suffered from a perforated appendix and underwent surgery to have it removed years ago. Due to the same reason, she and her partner were never so sure they could welcome children into their family.

However, that changed when Erin gave birth to her first child with Ben, a baby daughter named Helen, in January 2018.

A few months before their daughter’s birth, in October 2017, Erin had opened up to Us Weekly about her husband’s help during her pregnancy. She said, “He doesn’t let me do anything! He’s so generous.”

Additionally, she stated that her partner has always been like that, and his helpful nature had gone into overdrive since they found out about the baby.

In May 2021, the married duo welcomed their second child, another daughter named Mae. Initially, they had kept the news upto themselves only but decided to finally make it public in January 2021.

At the time, Ben told US Weekly, “We kind of put that in God’s hands. We weren’t trying to get pregnant with Helen and it happened. If that’s what God wants for us, then it’ll happen again.”

Before their second daughter’s birth, the two had gone through a “period of grieving.” Erin told Today Parents, “I was just grieving our time as a family of three and thinking, ‘It will never be like this again.’”

But everything changed when they welcomed their second child. “All of our worries were unfounded. It feels like Mae was always there,” she added.

Similarly, the parents of two spent some time adjusting to the changes when Mae entered their life. In an Instagram post, Erin revealed that she didn’t have the time to figure out anything or even cook real food until their second daughter was seven weeks old.

Thankfully, she was able to sort things out. And Ben was always there to support his wife in those circumstances — about which Erin has highly spoken of in multiple Instagram posts.

With one toddler and a newborn in hand, it’s not so easy for Erin and Ben to take some time off for themselves only. In an exclusive interview with US Weekly in March 2022, Erin talked about the same topic.

She first said, “It’s just a non-negotiable, every night at 7:30 the girls are in bed, then that’s our time to be us.” Erin also mentioned that another way to spend time with her husband was their work, which allowed them to see each other in the daytime.

“We have that advantage that I think a lot of couples don’t have. Some people must drive each other crazy being together all day, but it’s the only way we’ve ever [done it],” she added.

Erin further talked about how tough it gets during supper time with two little kids in her Instagram post of April 27, 2022.

She had shared a selfie of herself and wrote about it while also adding some humor in the middle. “The supper time shuffle is no joke with two little ones,” she first wrote.

“I’m figuring out that Helen can help me cook (she loses interest after about 20 minutes of chopping the soft vegetables with a butter knife, but it’s so fun while it lasts — elbow to elbow making a meal with my big girl)….”

“…while Mae sits beside us in her high chair having her supper via baby charcuterie, one food at a time: raspberries, blueberries, tomatoes, black beans, rice, goldfish, literally anything else I put on her tray.”

Erin ended her caption by asking her followers what’s their secret for making it from 5 p.m to bedtime with busy babies and hungry bellies.