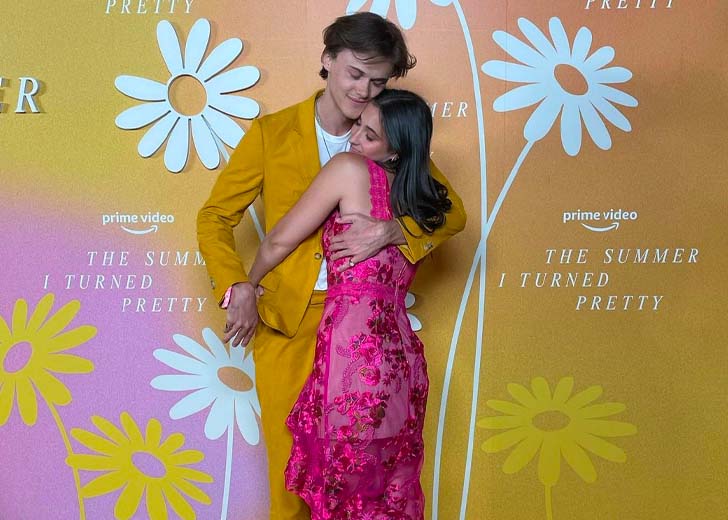 The duo truly look cute together!

Christopher Briney won over the hearts of millions through his performance of Conrad Fisher in the new Amazon Prime Video series The Summer I Turned Pretty.

Since the show came out, many people have started to know the emerging actor and have become invested in learning if Briney has someone special in his life when the cameras aren’t rolling. And we’re happy to that that he has!

Briney is currently in a romantic relationship with his actress girlfriend Isabela Rose Machado, or Isabela Machado. As of this writing, the couple has officially been together for a year. So, to mark the occasion, here is a look at some of their cute moments on Instagram.

Christopher Briney and Isabela Machado’s first post featuring each other

As per Briney and Machado’s official online resumes, the two attended Pace University, majoring in Acting For Film, Television, Voice Over, and Commercial. So, it’s highly likely that they met there for the first time.

After bumping into each other, they initially became friends for several years before taking further steps in their relationship. On March 8, 2018, the actor took to his Instagram handle to feature his now-girlfriend and his other friend Dan Kulesza.

A couple of months later, on May 11, Machado featured Briney on her Instagram handle. She had posted a picture taken in Lower Manhattan in which she was with her friend, Lucy, and Briney was walking behind them.

They go hard on Earth

Briney and Machado started as friends, and there was a whole group with whom the couple spent a lot of time. On May 7, 2018, the actor posted a picture with some friends, including Machado.

Besides Briney and Machado, the two other people in the picture were Dan Kulesza and Olivia Yount. “We go hard on earth,” Briney had captioned his post.

Over two months later, on July 21, Machado shared a picture in which she was with her now-boyfriend and Yount. The photo was taken at Lake Gaston, North Carolina, and it was captioned, “6 days but who’s counting.” It seems they were on vacation.

The drunk gang of four

During their acting school days, Briney and Machado had a lot of fun with their friends. And Briney’s Instagram post of October 28, 2018, shows that they occasionally got a bit tipsy as well.

The actor had posted a picture in which he was seen alongside Machado, Kulesza, and Yount. All of their expressions and t-shirts with “Drunk” written over them hinted that they were down a couple of bottles.

A February filled with fun

On March 2, 2019, Briney shared multiple snaps captured over different days of February alongside Machado and his other friends. Keeping the caption simple, he wrote, “February fun.”

On May 12, 2019, Machado took to her Instagram handle to share a picture of herself and Briney sitting in front of each other. “I <3 Acting school,” she captioned her post.

The picture was still taken from a play from their acting school in which the two had taken part. It was titled Reasons To Be Pretty and was directed by Anthony Arkin. Briney and Machado were playing the roles of lovers named Gregory and Stephanie.

The four horsemen of best friends

By now, it’s evident that Briney and Machado have a strong bond with their best friends, particularly Kulesza and Yount. On May 17, 2020, the actor expressed how thankful he is to have them by his side.

He posted multiple pictures taken over the years alongside Machado, Kulesza, and Yount and wrote, “the best friends a guy could ask for. 18J forever.” At the time, Briney and Machado were yet to start dating.

The kiss at the lake

In late February 2022, Briney, Machado, and their friends visited one of their go-to places — Lake Gaston. And when Machado shared pictures from that trip on February 23, 2022, we got to see her and Briney kissing each other for the first time.

Most recently, on May 9, the couple once again visited Lake Gaston, where they again shared a kiss. While captioning the second picture, she said she was so glad they kissed. “I never want it any other way,” Briney commented under the post.

Briney and Machado recently hit the red carpet together while attending the premiere of Amazon Prime’s The Summer I Turned Pretty in New York City.

The actor shared a couple of snaps from the memorable event on June 18, 2022, and one of them was with his partner. Similarly, the couple’s best friends also attended Briney’s big event.

One year of togetherness

On Friday, June 24, 2022, Briney took to his Instagram handle to post a picture and a short clip taken alongside Machado. The actor had posted them to mark his first dating anniversary with his girlfriend.

Christopher Briney with his girlfriend Isabela Machado at the premiere of The Summer I Turned Pretty (Photo: Getty / Craig Barritt)

“A whole year!? I could never want anything else,” he captioned his post. Going by all that, it could easily be said that Briney and Machado have bonded excellently over the years, with their togetherness starting as friends and eventually turning into a romance.

Both of them have supported and held each other hands during their rough times. Besides, during his interview with Glamour Magazine, the actor mentioned that at one point in filming The Summer I Turned Pretty, he got to know that his partner had a bad day.

To cheer her up, he sent flowers and a teddy bear from North Carolina through a mail service. And though he did acknowledge that it might not be the most incredible thing, he was proud of himself for making that happen.