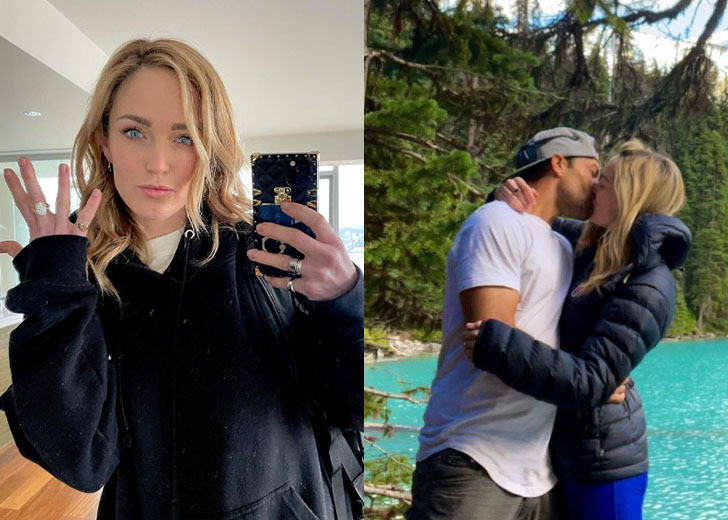 Everything you need to know about Caity Lotz’s personal life.

Caity Lotz is a talented American actress who gained prominence for her portrayal of Sara Lance/White Canary in The CW’s Arrowverse television shows. Those shows are Arrow, DC’s Legends of Tomorrow, The Flash, Batwoman, and Supergirl.

Apart from the Arrowverse shows, she has also appeared in movies and TV shows such as Law & Order: LA, The LXD: The Secrets of the Ra, Death Valley, Battle of the Year, Mad Men, 400 Days, and Small Town Crime.

Lotz’s professional life is an open book, quite like her personal life. The actress has been open about her romantic relationships in the past. And her fans are now eager to know her present relationship status.

Who is Caity Lotz dating?

Lotz is currently in a romantic relationship with her Canadian actor boyfriend, Kyle Schmid.

The couple began dating somewhere around early or mid-2021. But, the exact timeframe is currently unknown.

The actress featured her partner for the first time on her Instagram handle on June 1, 2021. The picture she posted was a group mirror selfie in which the duo was with their friends and their respective dates.

The next time she posted something with her boyfriend was on the 4th of July, 2021. However, it wasn’t until September 3, 2021, that she confirmed her romance with Schmid.

On that day, she shared a series of pictures from their hike to the Joffre Lakes Provincial Park. The last picture of that post was a picture of the now-confirmed couple kissing each other in front of a beautiful lake.

On the next day, her actor boyfriend shared some more photos, featuring Lotz for the first time on his Instagram handle. Since then, they have been sharing more and more clips and images alongside each other.

On the occasion of Lotz’s 35th birthday, December 30, 2021, Schmid made a special Instagram post by sharing a collage picture of several pictures taken alongside his partner. In the caption, he thanked her for coming into his life.

“Rivers, lakes, mountains, and deserts are just the beginning. To many more adventures and celebrations!” he ended his long-yet-sweet caption.

The actress had recently posted a picture with her boyfriend on February 27, 2022 — meaning they are still together. She captioned her post as “Story told in a mystic way….”

Going by all that, it seems like Lotz and Schmid have been relishing their togetherness ever since they began dating.

Lotz was previously rumored to be gay/lesbian. Those speculations started swirling around after she sparked dating rumors with Pitch Perfect actress Ruby Rose.

Lotz had shared a picture with Rose in December 2020, which led many of their fans to start the gossip — Rose is openly gay. The rumors spread further after they continued to share more and more pictures alongside each other via their respective Instagram handles.

As per DailyMail, Lotz had shared a selfie with Rose via her Instagram story in which Rose was resting her head on Lotz’s shoulder with a lit-up pinkish sky behind them.

The same outlet further reported that the two had also celebrated Lotz’s birthday together, and Rose had wished Lotz by writing, “Happy birthday to one of the most precious people I know.'”

All of that eventually led people to wonder if Rose is Lotz’s girlfriend. Besides, it also raised people to question Lotz’s sexuality. There were fan queries such as: “Is Caity Lotz gay?” and
“Is Caity Lotz lesbian?”

As of now, none of those questions have been answered. Additionally, neither of them has confirmed their alleged togetherness nor their split. Their dating speculations eventually shut down once Lotz was seen with her present boyfriend.

Before her relationship with Schmid was confirmed – that eliminated the idea of her being gay/lesbian – Lotz was in a couple of relationships — with men.

The Live at the Foxes Den actress’ first known relationship was with a Polish actor named Maciej Zakoscielny. The former couple initiated their relationship in 2013 after meeting each other on the set of the movie Battle of the Year.

In the same year, in June 2013, they reportedly confirmed their relationship via Facebook – Lotz had shared a picture from her trip to Poland with Zakoscielny. Months later, it was speculated that they got engaged, and a potential wedding was on the way.

Nonetheless, those rumors faded away once it was reported that the two had parted ways for good before October 2015.

Lotz used to share numerous pictures with her now ex-boyfriend via her social media handles, and it seemed their relationship was strong. However, it looks like it wasn’t quite strong enough to last forever.

By early December 2019, the actress had deleted all the pictures she had posted with or alongside Lewis. Additionally, on December 11, 2019, she took to her Twitter handle to post a gif and confirm her split with Lewis.

In the caption, she had mentioned that she was going through a breakup, and it was time to cry, grow, and fly.