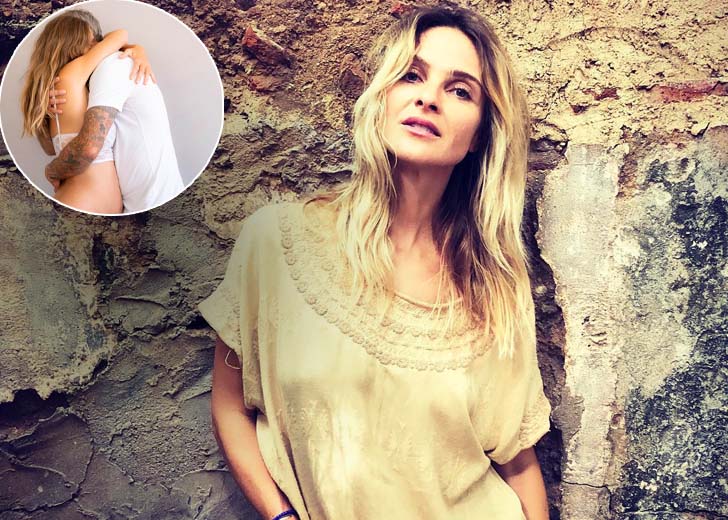 Since the 1990s, Beau Garrett has been a famous celebrity. She has a successful acting and modeling career.

Garrett is well-known for her role as Captain Raye in Fantastic Four: Rise of the Silver Surfer and Jessica Preston on the ABC series The Good Doctor.

Some of her renowned movies are, Made of Honor, Kalamity, Freelancers, Tron: Legacy, and Lust for Love. Her television works include Criminal Minds: Suspect Behavior, Girlfriends’ Guide to Divorce, The Rookie, and many more.

Following her popularity, fans are interested to know who her partner is and who the baby’s father is as she recently gave birth.

Who is Beau Garrett’s boyfriend?

Fans of Garrett share the same desire to learn more about the lives of their favorite celebrity away from the spotlight.

However, she keeps a low profile and withholds a lot of personal information from the public, yet she still teases her fans by occasionally sharing photos of her boyfriend.

Garrett announced she was 22 weeks pregnant on June 21, 2022. (Source: blackdogtravels/Instagram)

On April 24, 2022, Garrett mentioned she had a boyfriend on her Instagram. She wrote, “My boyfriend says I need to post more. So. Ok,” alongside a cute picture of herself.

Nonetheless, no information was provided regarding her boyfriend’s identity, how they met, or what initially ignited their relationship.

The Firefly Lane actress, a few days ago, on December 3, 2022, uploaded a sequence of images discussing her experience filming Firefly Lane. At the end of the post, she posted a sweet photo of herself holding her new baby.

The Good Doctor actress posted a lovely picture flaunting her baby bump and captioned it, “Rainbow baby coming in October. Couldn’t be more excited and grateful we get to go on this ride. #22weekspregnant.”

Her comment section was flooded with “congratulations,” as many people rushed to wish her well and show their support for her.

On October 1, 2022, she further posted multiple pictures with her boyfriend, also the baby’s father, while showing off her growing belly.

Continuing to conceal her boyfriend’s identity, she once more succeeded in doing so because none of the photos show her boyfriend’s face; instead, only his tattooed hands are visible.

Garrett and actor/director Chris Payne Gilbert were romantically involved. The pair didn’t discuss their connection much, but they didn’t hesitate to walk the red carpet together at several events.

On July 19, 2011, the actress and her now ex-boyfriend debuted as a couple at the premiere screening of the film Commerce during the American Film Festival at the Mark Goodson Theatre in Los Angeles.

Similarly, Garrett disclosed to People on July 25, 2011, that she initially met her partner at a charity event in California.

“I saw his dog and I fell in love with [it]. He was watering his plants and I didn’t see him; I saw his dog. And then I saw this gorgeous man with his shirt off, so it was like a double whammy,” she stated.

The pair decided to move in together as a further step in their relationship at the end of October 2011. Fans anticipated seeing the couple wed, but unexpectedly, they called it quits the same year.

Before Garrett’s relationship with Gilbert, the actress dated the actors Garrett Hedlund in 2010, Chris Pine from 2008 to 2009, and Kyle Howard in 2007.

Who Is Sommer Ray’s Boyfriend Now? Here Is Her Dating History