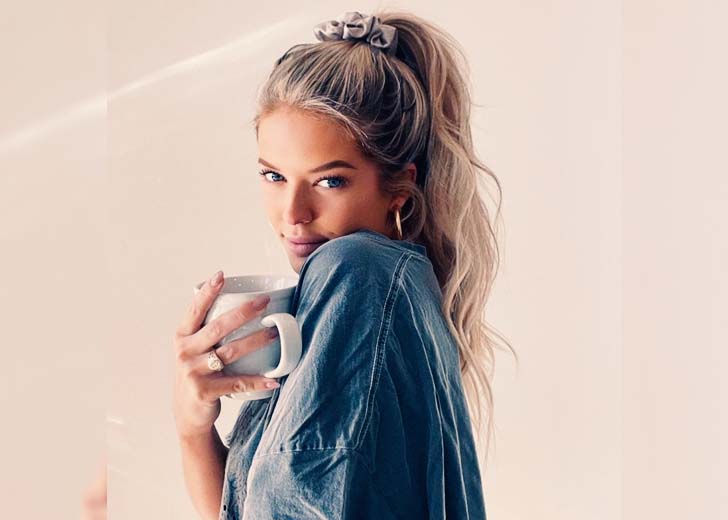 Salley Carson has been getting a lot of attention lately, especially since her name was announced as one of the 33 women competing in season 26 of The Bachelor with Clayton Echard.

After ABC released pictures of the 33 contestants, including Carson’s, on September 25, 2021, popular podcast host and Bachelor sleuth, Reality Steve did some digging and found out an interesting bit about Carson.

He immediately took to his Twitter handle – on the same day – to share some pictures related to Carson, including a screenshot of a Facebook profile that is reported to be of Carson. In the first part of the caption, he wrote:

“Hearing a ton of stuff already about these women, but this one has me floored.” As he continued, he mentioned that Carson was engaged to be married and even had a bachelorette party a month ago, in August 2021.

“She was set to be married TOMORROW but the wedding was called off a couple of weeks ago. Now she’s on the Bachelor ha ha,” he further added.

As per his reports, her wedding was supposed to take place on September 26, 2021, and her bachelorette party was held a month ago on August 2021.

Additionally, in one of the pictures that he had shared, there was a screenshot from one of Carson’s friends’ Instagram posts. The picture seemed to be from the bachelorette party as it was posted in August 2021.

Salley Carson was supposed to get married to her boyfriend-turned-fiance. (Photo: Reality Steve Twitter)

Similarly, in the above-mentioned screenshot of Carson’s Facebook profile, the profile picture, as well as the cover picture in it, was of the television star with her now ex-fiancé. Furthermore, the third picture was of a wedding registry of the now-separated couple.

Who Is Salley Carson’s Ex-Fiancé or Boyfriend?

As per Distractify, Carson’s ex-fiancé’s name is Avery L. Buchholz. He is around 40-year-old and hails from Virginia.

As for his profession, he is a neurosurgeon who presently runs his own practice in addition to his service as an assistant professor of neurosurgery at the University of Virginia Health System.

As per his official website, he “treats a wide range of conditions affecting the cervical, thoracic and lumbar spine and uses state-of-the-art technology to perform various intricate procedures.”

From there, he received his degree in Doctor of Medicine and a Masters in Public Health. He then joined the Medical University of South Carolina to complete his neurological surgery residency.

Why Did Salley Carson End Things with Avery L. Buchholz?

Coming back to Carson and her now ex-fiancé, what happened between them that resulted at the end of their relationship?

Well, a source close to Carson had told The Sun that by the time she was set to join The Bachelor, things were already going south between the couple. But, as they weren’t “fully broken up,” they didn’t want to cancel the trip that cost a lot of money.

The source also told that the duo’s wedding was officially called off in late August and that it was Carson who ended things with Buchholz. The source told;

“It was not a mutual decision, Salley ended it. There was infidelity on his part, he was unfaithful and that’s when things ended for good.”

The source further added that Carson would never cancel such an important event of her life for no reason as it would really be “insane.”

They continued by saying, “She’s not the kind of person to cancel a $60,000 wedding that her dad paid for to go on a show. She was so ready for a husband, a family and all of that. She was heartbroken.”

The Sun also reported that they confirmed Buchholz’s cheating part with Carson’s family and it was the main reason behind their split.

Salley Carson’s Friend Nominated Her to Go On ‘The Bachelor’

As per the same source, following Carson’s split with Buchholz, a friend of hers nominated her to go on The Bachelor, and the producers of the show gave the green light within four days.

But why did Carson agree to join the dating show just some days after her broken engagement? To that, the source replied by saying, “In the moment, she thought she was doing something where she can go into it with an open heart and heal.”

They continued, “She thought it would good for her but it was probably too soon. It’s so hard. She still has a lot of feelings for him, you know, she was supposed to marry him. Her family was skeptical at first but then they wanted her to go because it got her out of a situation she needed to get out of.”

“Her friends and family knew about the show from the second Bachelor producers called. His mom even knew about it and was supportive of it,” the source further added.

Buchholz is yet to give a comment or response on the topic.

Salley Carson’s Journey on ‘The Bachelor’

*Spoiler Alert* During the premiere of season 26 of The Bachelor, it was shown that Carson paid a visit to Clayton Echard — the bachelor — in his room just before the limo entrances.

During that visit, she discussed her mixed feelings about being on the show. As they talked, it seemed as if they were starting to connect. Besides, Echard even offered Carson to accept one of his roses.

After seeing his gesture, she left the room to think for a bit. “Why did he have to pull out a [expletive] rose?! I’m torn in half,” she said while she was out of his room.

After a few more minutes of thinking, Carson left and eliminated herself. As she noted, she wasn’t ready to move on from her broken engagement in just a span of days, though Echard was “the nicest guy” she ever met.

Following her self-elimination, fans of the show have been wondering if she will ever join the dating show at some point. Well, as per reports from insiders, it’s very unlikely that she will make a return.

Was Salley Carson in a relationship before she got engaged to her then-boyfriend [Buchholz]? Well, presently there have been no reports of the spine surgery robot operator dating someone in the past.

As Carson came into fame only recently, it’s hard to find details into her former relationships and know if she has an ex-boyfriend.

She has already deleted most of the pictures of her ex-fiance, so it’s easy to assume that she might have done the same with the pictures alongside her ex-boyfriend/ex-boyfriends if she was in a relationship.

Posted on January 2, 2022January 2, 2022
Photo: Commons.Wikimedia From some of the world’s most famous sporting events to huge music festivals for people who like to party, there are events...
Read More