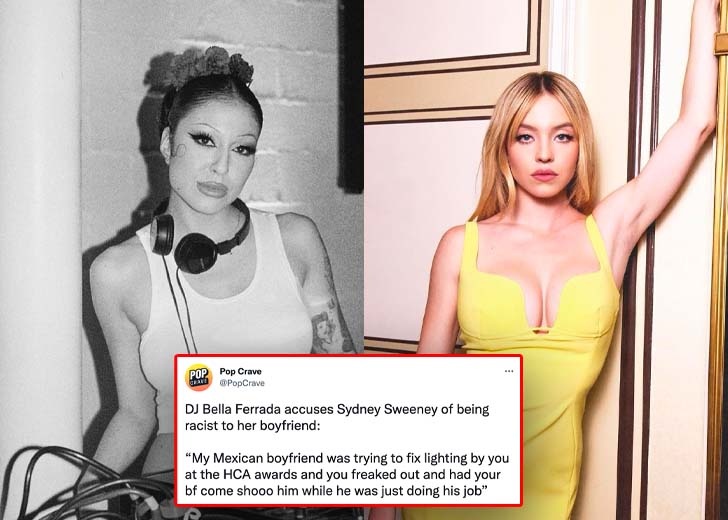 A DJ has come forward with racist allegations against Sydney Sweeney, claiming that the actress is prejudiced against Mexicans. This came after the Euphoria actress was discovered as pro-Trump, as mentioned in SK Pop.

DJ Bella Ferrada, a Los Angeles-based DJ, accused Sweeney of being “racist” toward her boyfriend on her Instagram.

Ferrada recently posted an image to her Instagram story that Sweeney had recently uploaded to her feed. She later shared a carousel of photos from her mother’s surprise party.

In response to the scandal, Ferrada wrote, “Especially after she pulled some racist [expletive] on Lalo when he was working at an award show. But we’ll save that tea for another day.”

The DJ also commented on Sweeney’s hoedown post, revealing that the 24-year-old actress “freaked out” when Ferrada’s Mexican boyfriend approached her at the HCA awards to “fix lighting.”

The comment read, “All I see are red hats and red flags, girl bye, this explained why you got so scared when my Mexican boyfriend was trying to fix lighting by you at the HCA awards, and you freaked out and had your bf come shoo him while he was just doing his job and has no idea who you even are. Why were you so scared? It’s giving karennn.”

According to fans, Sweeney was seen smiling with a man wearing a Blue Lives Matter t-shirt. Sweeney captioned the Instagram post, “No better way to celebrate my momma than a surprise hoedown.”

The backlash, as mentioned earlier, appears to have been triggered by a series of photos from Sweeney’s younger brother Trent’s Instagram. Many of the family members wore red caps in the posts in question.

However, the text on the caps read “Make Sixty Great Again,” as Trent E. Sweeney later clarified in his post. Despite this, many people criticized Sweeney and her mother on Twitter for allegedly being right-wing MAGA supporters.

The actress also addressed the situation on Twitter, pleading with users not to jump to conclusions. She wrote: “Please stop making assumptions. Much love to everyone.”

Ferrada has been called out by fans who have pics of her using racially charged language in her tweets after accusing Sweeney of being racist towards her boyfriend.

People are now looking up Ferrada’s old tweets, which show her repeatedly using the N-word.

A viewer took to Twitter to address the DJ’s previous tweets with frequently used racial slurs.

“She sounds like an opportunist like where is this randomly coming from. & mind you this is her.”