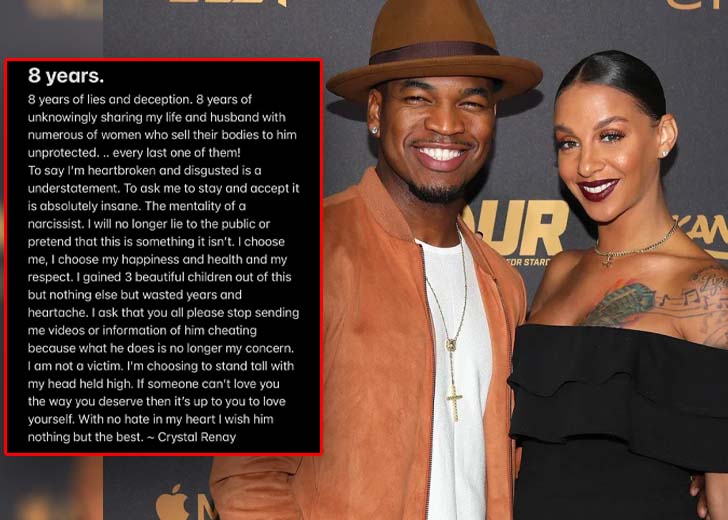 “To say I’m heartbroken and disgusted is a understatement,” Crystal Smith writes.

There is trouble in paradise for Ne-Yo and his wife, Crystal Smith.

The pair initially tied the knot in 2016 and then renewed their vows in 2022. The singer was open about the difficulties in their marriage in the past.

But now, Smith has spoken up about their relationship, which is quite messed up. On July 31, 2022, she took to Instagram to reveal her husband’s behavior.

Ne-Yo exposed for cheating by his wife

Smith uploaded a lengthy post on her Instagram with the caption “God bless.” The post explained the eight years of relationship she shared with the singer.

She dubbed those eight years as the years of “lies and deception.” She then explained that all those times she was together with Ne-Yo, he constantly cheated on her.

Ne-Yo’s wife, Crystal Smith, exposed her husband for cheating on her. (Source: Instagram)

Smith revealed that the singer’s cheating pattern included “numerous of women who sell their bodies to him unprotected.” She did not explain what she meant by selling bodies, but it can be presumed to be escorts.

She went on to explain how heartbroken she was to find out that her partner had been cheating on her. She said, “To say I’m heartbroken and disgusted is a understatement.”

She hinted that Ne-Yo asked her to stay and accept it, which she called “absolutely insane.” She said that it was  “the mentality of a narcissist.”

Smith admitted that she chose to put herself first, and this started with being open about it all. She said that she would no longer lie to the public and pretend.

She emphasized, “I choose me, I choose my happiness and health and my respect.”

Smith confessed that all she got from her relationship with Ne-Yo were their three beautiful children —  Roman Alexander-Raj, Shaffer Chimere Jr., and Isabella Rose. Everything other than that was “wasted years and heartache.”

Smith also asked people to stop sending information and videos of Ne-Yo cheating. She did not care about it anymore and confirmed that she was not the victim of the situation.

She chose to stand tall with her head held high and put herself first. She ended her statement by saying she wished Ne-Yo the best with no hate in her heart.

Ne-Yo has not said anything about the situation but liked the post uploaded by his wife. Similarly, neither has revealed if they will end their marriage in a divorce or not.

Ne-Yo and his wife hit a rough patch in February 2020. They had announced that they would get a divorce back then.

The singer told People that his relationship with his wife and kids suffered because he was working a lot. He could not spend time with them, which strained their relationship.

But when the COVID-19 pandemic hit, it became a blessing in disguise for the pair. They reconciled and spent time together with their family in quarantine.

The duo re-evaluated their marriage and hence decided to get back together. As a result, they renewed their vows in April 2022.

They had a massive celebration for it in Las Vegas with their friends and family. But now, it seems like their marriage is over for good.

However, until Ne-Yo or Smith explicitly says they are divorcing, nothing can be said for sure.