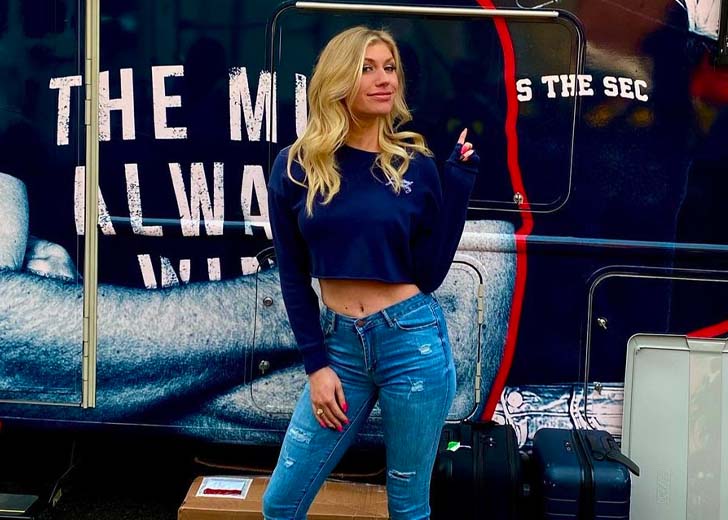 On August 21, 2022, Kayce Smith revealed that she and her boyfriend, whose details she is yet to disclose, are expecting a new baby.

She announced the news in a Barstool Sports blog, revealing the couple was overjoyed to welcome their new addition.

And while keeping in mind her work obligations, the sports broadcaster wished to communicate the changes in her personal life with her followers.

Kayce Smith and her boyfriend will welcome a baby

“So I am going to be a Mom,” she wrote in the blog’s title, followed by a detailed explanation of her experiences and how she felt upon learning of her pregnancy.

She explained, “I’m going to be a mom. Of a real-life human. And I’m really excited about it. My boyfriend and I’ll be allowed to leave the hospital with a baby in February.”

In addition, Smith revealed that she never wanted to have kids or become a mother in the first place. And she said she used to tell that thing openly amongst her close ones.

She continued to share the times when she moved to New York and chose relationships that fit her willingness not to have kids.

However, things changed when she came across her present boyfriend. For instance, when she became pregnant, her boyfriend assured her that she was “going to be an awesome mom.”

She also added, “But instead we both immediately knew this baby was changing our lives in the best way possible.”

Besides that, through her blog, she revealed that she had kept the news a secret amongst her family. Sharing why she did so, she emphasized that she was unsure of “how to break the news.”

“…so I’ve done what I’m pretty good at avoidance to the highest degree. I didn’t even tell my family until recently,” she stated.

So to hide her pregnancy, she began fake drinking in public and even started wearing baggy oversized clothes. Moreover, she particularly did that because everyone around her knew that she enjoyed red wine and vodka shots.

All that being said, due to her commitment to her co-workers [Dave, Dan, Brandon, and Deion] and considering her “mental health,” Smith wanted to break the news before the upcoming football season.

Kayce Smith talks about her boyfriend

Smith also took advantage of the occasion to compliment her lover, who has stood by her side no matter what.

The news reporter remarked, “I have to brag on baby daddy for a second. I never thought I deserved (let alone would find) somebody so unbelievable. As cheesy as it sounds, he fully loved me while I learned to love myself again, and I know he’s going to be an amazing dad.”

Smith further asserted that her boyfriend satisfies all of her cravings while she is pregnant. She said, “he keeps pickles, tomatoes, hot sauce, graham crackers, fruit and cheese blocks stocked HEAVY.”

She hasn’t mentioned future wedding plans or revealed anything about her baby daddy in any of her social media posts.