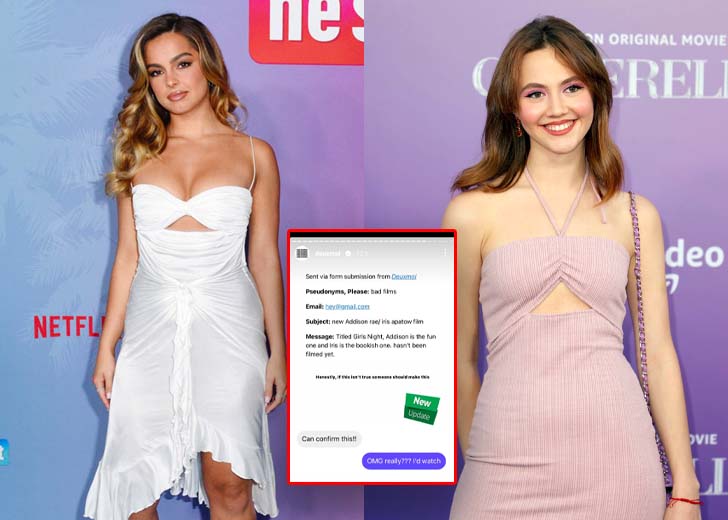 Addison Rae is one of the highly followed TikToker.

Recently, there has been news that Rae could be doing another movie soon enough. Learn more details on the information.

Addison Rae and Iris Apatow are supposedly doing a movie together

Recently a celebrity news page on Instagram, DeuxMoi, a trusted source, added to their story that Rae is possibly doing a film with Love actress Iris Apatow. The news was forwarded to the media by a close source.

According to the post, Rae and Apatow could be seen in the movie titled Girls Night together. In the film, Rae would be playing the character of a fun and outgoing one, while Apatow would be seen as a bookish nerd.

Even though the source confirms the news, the filming has not yet started. But the information has made Rae’s fans excited about the upcoming movie, as they will be able to see their favorite TikToker on the big screen again.

Rae began actively posting content on TikTok in July 2019. Her dance videos quickly gained popularity, and as of July 26, 2022, she had garnered over 88 million followers, ranking her as the fourth most popular user on the app.

On the other hand, she debuted as an actress in the 2021 Netflix original movie He’s All That, a gender-flipped version of the 1999 movie She’s All That. She also recorded her first single, ‘Obsessed’ that same year.

Not long ago, in February 2022, Rae had signed another movie, which she said was exactly the type of role she wanted to do.

According to a Deadline report, the multi-talented actress has signed up with Paramount for her next major film role. She will appear in Fashionista, which is exactly the type of movie she wanted to do next, the publication claims.

However, her debut on the big screen has raised many questions and debates among the viewers. While some fans are really happy for the up and coming actress, many believe that Rae’s acting career is not because of her talent but the influence of money and social media.

Iris Apatow started acting at an early age of five

Now, Rae’s soon-to-be co-star Apatow is also an established actress who has appeared in films such as Funny People, This Is 40, and Knocked Up.

She has been making a name for herself since she was five. The 2007 romcom Knocked Up was Apatow’s first foray into acting, thanks to her parents, director Judd Apatow and actress Leslie Mann, who also played her onscreen mother.

She and her elder sister, Maude Apatow, are frequently portrayed as onscreen sisters. They have, nevertheless, extended their portfolios in recent years and are establishing themselves as prominent actors.