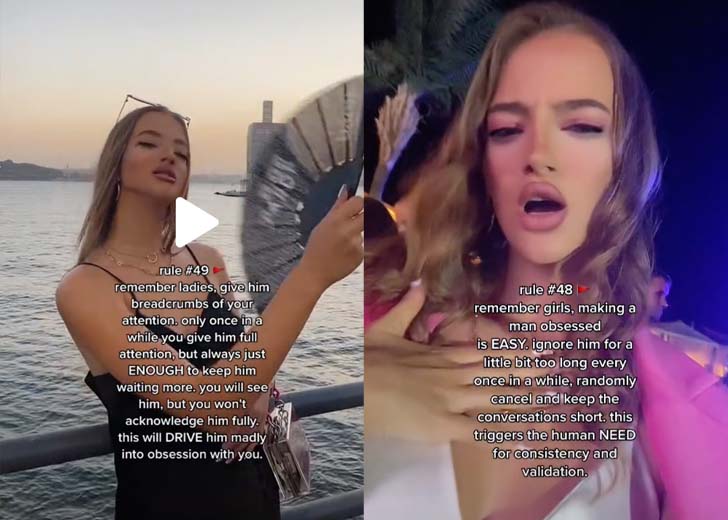 Madeline, a self-proclaimed psychologist, is facing backlash for her dating rules and relationship advice.

TikTok has been one of the significant platforms for people to share everything about themselves and their opinions. However, at times, it backfires and creates controversy.

One such person is Madeline, best known as @madellinnee on TikTok. With over 25K followers on the platform, Madeline has created a fan base for herself by giving dating rules and relationship advice.

While many deem it to be sarcastic, people can’t help but wonder what the TikToker is trying to show — is she trying to be funny, or is she giving toxic relationship and dating advice?

People who believe the latter call Madeline out, especially for targeting the vulnerable and making jokes about serious situations.

Here is everything we know about the controversy.

Who is Madeline or @madellinnee?

Madeline is a lady claiming to be a psychologist whose TikTok bio reads, “YOUR DAILY PSYCHOLOGIST.” She often posts dating and relationship guidelines on TikTok, which several women have praised for ‘curing them.’

She has been posting a new video of herself out and about every day for the past three weeks. Each video is accompanied by a written guideline educating women on how to interact with males, from the early phases of messaging through being in long-term relationships.

While many are humorous and helpful, they should be taken with a grain of salt. For instance, her rule 21 can help remind women of their self-worth.

Similarly, her rule no. 41 reads, “if he cancels: last minute, reply ‘ok’ then text him 5 mins later and say: ‘Hey, my evening just became free, do you still wanna link?’ hell know that message was not for him.”

All the commenters on this TikTok have found it funny and loved it.

In some of the TikToks, she gives harsh reality checks. It can be seen in her rule no 10, which states, “There is no such thing as mixed signals, it just means that he never wanted you… do better.”

While many of these are found funny by her audience, she recently faced backlash for giving toxic dating rules and relationship advice.

As said before, many of the rules stated by Madeline encourage women to play games to attract men’s attention. Unfortunately, some are toxic and unpleasant.

For example, Madeline’s rule 26 reads, “Give them trauma so they’ll never forget about you.” Many did not like this approach since they found it toxic.

@madellinnee claims to be a psychologist on TikTok. (Source: TikTok)

Similarly, rule 23 states, “Make him think you’re obsessed with him so that when you’re detaching he misses it and becomes obsessed with you.”

Furthermore, rule 30 stereotypes men and their behavior while dating a woman. It reads, “Act like wife material in person then completely uninterested over text, he will become obsessed with the chase.”

But the one that created the most controversy is Madeline’s unnecessary jab at single mothers. As a result, she provoked outrage among single mothers on social media.

It was rule 31 that said, “It’s okay to get your heartbroken… some girls are left with children.” The video soon went viral with over 800,000 views on TikTok.

Madeline’s rule no 31 created a controversy in TikTok. (Source: TikTok)

That irritated single mothers, who commented how disappointed they were because of Madeline’s comment. They reminded her that many did not have a choice and were happy with their decisions.

After a lot of followers defended Madeline as well, stating she didn’t want to offend anybody. Madeline also defended herself and apologized in the comment section of the video.

She wrote, “Girls, I don’t mean to hurt anyone, just wanted to increase awareness for the younger girls to take maximum care with boys.” Soon after her apology, Madeline went on to post more dating rules and relationship advice on her TikTok.