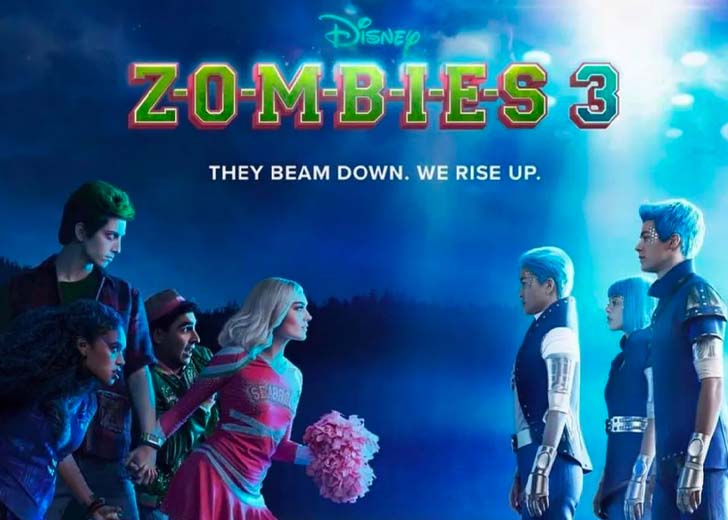 Zombies 3 releases on Disney+ on July 15.

Milo Manheim and Meg Donnelly are back with the new installment in the Zombies franchise, with Zombies 3 (stylized as Z-O-M-B-I-E-S 3) scheduled for a release on July 15, 2022, only on Disney+.

On Tuesday night, June 28, the two lead stars took to their respective Instagram handle to show their excitement for their upcoming movie. Both of them had posted identical-looking pictures of them standing in front of Zombies 3’s poster on a billboard.

Manheim and Donnelly seemed to be in a parking space with a number of vehicles. Likewise, behind the billboard containing the movie poster, there seemed to be a small forest or a park.

In one of the pictures Manheim posted, he could be seen carrying Donnelly up in his arms as she held one of her hands up. Donnelly had captioned her post by writing, “literally what,” whereas Manheim had written, “This is a big moment.”

Manheim’s short caption was followed by a blue heart emoji, signifying the importance of the blue color that is heavily used in the movie’s official poster. Additionally, the blue color could be related to the aliens that Zombies 3 features — the off-world visitors will be wearing blue-colored outfits as seen in the trailer.

Speaking of the official trailer, it was released less than a week ago, on Thursday, June 23, 2022. The trailer showed everything was going on fine as humans and zombies started to get along, but things changed as a group of intergalactic outsiders show up and break havoc.

In the third installment in the Zombies franchise, the viewers will see Zed and Addison starting their senior year at Seabrook High. The people of Seabrook have accepted monsters and zombies and the town has become a safe place for humans and monsters.

As for what’s happening with Zed, he is on the verge of getting a football scholarship and becoming the first-ever Zombie to attend college. On the other hand, Addison is getting ready for Seabrook’s international cheer-off competition.

Speaking on the whole Zombies franchise, Manheim told ET, “What I love is that there’s the overarching message of the whole franchise of accepting people, but we should also encourage unique people to be a part of our circle because then we can open our minds. It’s all about creating the paradise where you are.”

Milo Manheim and Meg Donnelly were once rumored to be dating

Manheim and Donnelly have been working together on the Zombies franchise since 2018. So, it’s obvious that they have maintained a great friendship which could often be seen through their Instagram posts.

Similarly, the two play as a couple in the Zombies franchise and have a great bond off-screen as well. Thus, there have been rumors that Manheim and Donnelly are dating each other. However, those rumors are clearly false.

Firstly, neither of them has confirmed the speculations. And secondly, Donnelly has been in a romantic relationship with her boyfriend Noah Zulfikar – an actor and dancer – for a couple of years. Fun fact: Donnelly and Zulfikar met in 2019 while working on Zombies 2.