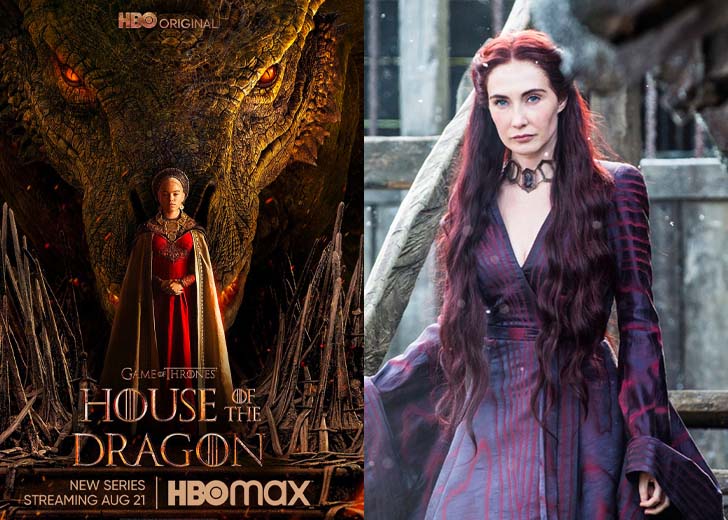 Lady Melisandre was around 400 years old at the time of her death.

Carice van Houten has expressed her desire to reprise her Game of Thrones character, Lady Melisandre, in HBO Max’s GOT prequel, House of the Dragon.

The Dutch actress recently took to her Instagram handle to repost a story made by one of her fans after the series premiere of House of the Dragon. The fan’s Instagram story contained a picture of the Red Priestess with a text.

The text read, “Just watched House of the Dragon. I’m just saying Melisandre is centuries old….” The fan had tagged Houten’s Instagram handle at the end along with a wink emoji. When the actress saw that story, she reposted it with fingers crossed emoji.

In the Game of Thrones universe, it has been established that Houten’s character of Lady Melisandre was born around 100 BC and was around 400 years old before she died in 305 AC at Winterfell after her enchanted necklace was removed, leading her to succumb to old age.

And as House of the Dragon takes place only 172 years before the birth of Daenerys, it’s very much possible that the Red Witch was still alive during the events of the prequel show.

After Houten’s tease, hopeful fans began expressing their thoughts. One tweeted, “And, she could. Melisandre is literally a witch and immortal. She’s like a thousand years old. That stone around her neck makes her look ageless. She was definitely around even during the beginning of everything.”

“She could as she is centuries old. I would be excited to see her actually. We also could see Bran running around the timeline, and that would make me barf. I mean, who has a better story than Bran the Broken? Besides everyone?” another wrote.

On the other hand, some Twitter users were unsure if Lady Melisandre’s appearance would make sense in the storyline as the character isn’t even mentioned in Fire and Blood, the book series on which House of the Dragon is based.

Talking about the same thing, one wrote, “It wouldn’t make sense to bring her on the show lol. She’s not even mentioned in the books. She’s really not needed for HOTD since she wouldn’t add structure to the show.”

“She’s alive but not even on the same continent during this time. I don’t see how they’d do it. The story is very much focused on Westeros,” another Game of Thrones fan tweeted.

The same fan later added, “Like it would have to be the briefest of cameos at best if she ever appeared on HotD. Really shoehorned in. Her timeline just doesn’t line up with the show’s story at all. I just can’t see how she’d be a supporting role in that story at all. I suppose unless they break canon.”

Furthermore, one Twitterati asked the showrunners only to include Lady Melisandre if it makes sense to the show’s plot and not for the fan service while referencing the fan service that Marvel has been providing lately.

That said, Houten’s appearance as Lady Melisandre in House of the Dragon currently remains unconfirmed. For now, only the writers and showrunners know if they would exclude or include Lady Melisandre from the prequel series.

As for House of the Dragon, the series premiere garnered positive reviews from thousands of fans worldwide. In addition, it accumulated around 10 million viewers on HBO in the United States, with HBO Max’s streaming platform being crashed for many.

Critics also loved the show and the performances of the whole cast. “The acting in this first episode is superb, as it needs to be,” wrote Den of Geek’s writer, Alec Bojalad, after the premiere of the first episode.