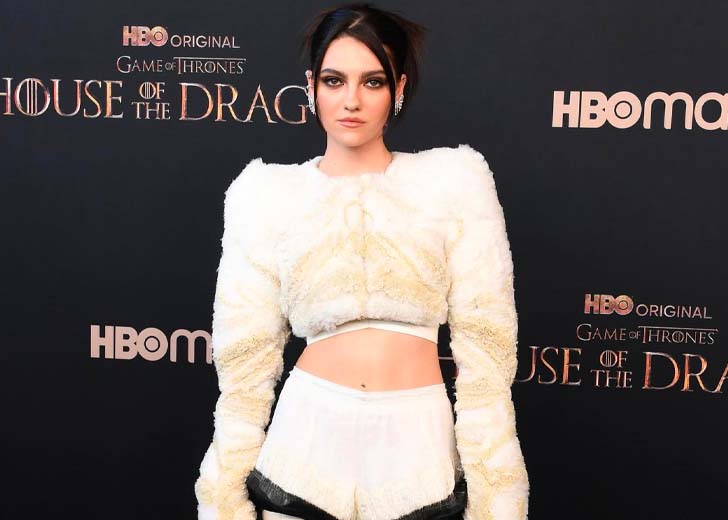 Emily Carey is an uprising English model and actress who is playing the role of young Alicent Hightower in the new HBO Max show House of the Dragon, which premiered on Sunday, August 21, 2022. House of the Dragon is a prequel series to Game of Thrones.

In addition, she is known for playing two more young roles of adult characters, as 12-year-old Diana Prince in 2017’s Wonder Woman and 14-year-old young Lara in 2018’s Tomb Raider.

Carey’s other movies and TV shows include Houdini and Doyle, Turn Up Charlie, Get Even, Anastasia, Casualty, Where Is Anne Frank, Monster Family 2, and The Lost Girls. In The Lost Girls, she shared the screen with Louis Partridge and others.

Who is Emily Carey dating?

Carey’s rising popularity has made people invested in learning more about her, especially her personal life. So, is she dating someone? Before learning the answer, one must know that the actress is openly gay.

Now that her sexuality is cleared up, does she have a girlfriend? The answer to that question remains unknown, as Carey has always kept her personal life matters hidden away from the outside world.

There have been no reports about her having a partner, and she hasn’t given any hints via her social media handles. On Instagram, she mostly shares things related to her daily life, profession, and memorable moments created alongside her friends.

However, she was once rumored to be dating her friend and fellow actor, Rhys Bailey. The speculations of their possible relationship started after people saw that the two were often together and used to drop cute comments on each other’s Instagram posts.

For instance, on May 8, 2021, Bailey posted an adorable picture with rumored boyfriend Carey and captioned it by writing, “my girl,” along with multiple heart emojis. And in reply, Carey dropped three comments reading, “I love youuuuu,” “partner in crime,” and “my other half.”

Similarly, on May 3, 2022, he shared multiple photos from his 19th birthday weekend, including some pictures with Carey. In the comments, Carey wrote, “my angel baby. I love u also nice jumper also also happy bday to us,” and Bailey replied, “happy bday to us <3 and yeah, I love the girl who got it for me.”

All these led people to believe that Carey and Bailey were in a romantic relationship. However, that’s not true as the two are only good friends and nothing more than that.

Additionally, Carey is gay, so if she were to date someone, she would have a girlfriend, not a boyfriend. To conclude, the model isn’t dating anyone now and is likely more focused on her acting career. There is also no information about her dating history.

Emily Carey came out of the closet in 2021

While Carey might have already come out as gay to her friends beforehand, she came out among her followers in the Pride month of 2021.

The actress first hinted at her sexuality on February 1, 2021, when she posted a picture of herself wearing something like a rainbow flag-themed hat. “happy lgbt+ history month,” she wrote in the caption.

Later on June 9, she posted another picture in which she was holding a rainbow flag-themed hand fan. She wrote, “invested in a rainbow fan and danced around with it cos it’s June.”

Weeks later, on June 25, she shared a picture of her rainbow flag-themed hand fan, donuts of the same theme, and cardboard that read, “Pride.” In the caption, she thanked her mother, Sarah MacDonnell, for sending her “some gay donuts” from Doughnut Time UK.

At this point, it was obvious to many that Carey was gay. But she made it more apparent on June 27 by sharing a picture, standing in the middle of rainbow balloons, with the caption, “posing like I’m ready to pounce on all the homophobes.”

The following year, she photo-dumped multiple pictures taken during the 2022 Pride month on her Instagram handle. In some pictures, Carey was seen at a local pride parade.