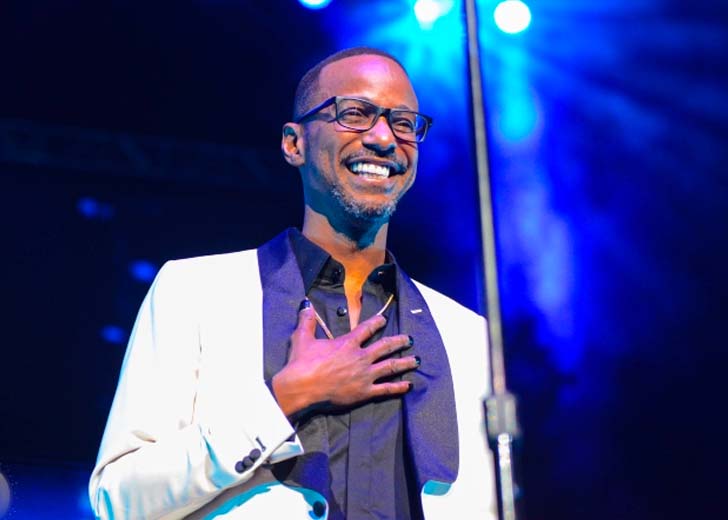 Tevin Campbell is proud of himself for coming out.

Tevin Campbell rarely speaks up about his personal life. Especially when it comes to his love life and sexuality —  he prefers to keep it out of the limelight.

As a result, many wondered who Campbell’s wife or partner could be. Similarly, many speculated that the singer was gay and had simply not come out.

Regardless of all the speculations, Campbell did not talk about his relationships and diverted the topics when they came up in interviews or podcasts.

He recently went into detail about his sexuality and revealed it to the public.

Does Tevin Campbell have a wife?

No, Tevin Campbell is not married, has no wife, and does not have a girlfriend.

In fact, it is unknown if he was ever in a relationship or was married to a woman. This is because he came out as gay in 2022 after years of speculations.

Tevin Campbell is not married and does not have a wife. (Source: Instagram)

Throughout the years, Campbell often hinted at his sexual orientation. However, he had never explicitly revealed that he was gay.

In a recent episode of the PEOPLE Every Day podcast, the singer talked about being gay and his journey as a member of the LGBTQ community in the music industry.

The ‘Can We Talk’ singer revealed that he is gay on the Thursday 18, 2022, episode of PEOPLE Every Day.

The artist, now 45, has been open about his sexual orientation to his family and friends since he was 19 or 20, but he didn’t go public until this year. He explained, “When I came out to my family and friends [at] about 19 or 20, that was it for me. And then I went on the road of discovering myself.”

He simply did not know who he was. But then, he started getting indulged in Broadway.

He joined the Hairspray cast in 2004, which lasted for six years. There, he came across a lot of people in the LGBTQ+ community.

Then, he realized that they were leading an everyday life with their respective partners. Campbell noted, “I had never seen that. That was a great time in my life.”

The singer pointed out how it was not a nice time to be homosexual in R&B when he was at the pinnacle of his career in the early 1990s. Black LGBTQ artists like Frank Ocean and Lil Nas X are now breaking down barriers.

Campbell expressed that he was delighted to see things change nowadays. He said, “It wasn’t like that in the 90s. But I’m glad I get to see it. I’m glad that’s changing. There are a lot of kids, especially young Black boys, that need to see representation.”

The singer doesn’t care what fans say about his being gay, and he’s content with his life’s achievements. He proudly said, “You know, there are a lot of child stars that don’t make it. But a lot of us do, and the fact that I’ve embraced me.”

In the past few years, Campbell has hinted that he was gay on Twitter. He added the rainbow flag emoji, as well as a Scorpio sign and a bald eagle emoji, to his Twitter profile in 2019.

On March 8, 2022, Campbell sparked suspicion about his sexuality by responding to a Twitter user discussing what their mother thought about the sexuality of various well-known singers.

Campbell answered with the words “Tevin is,” a rainbow flag, and a relaxed emoji. The singer eventually removed the tweet.