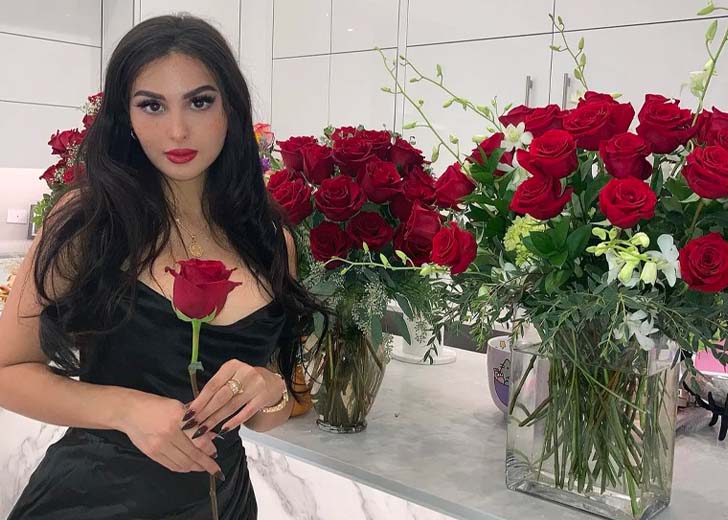 SSSniperWolf is a renowned internet personality who has garnered the limelight through her gaming content on her YouTube channel. Additionally, she has gained fame through her numerous appearances as herself in Dhar Mann’s videos.

The YouTuber initially started with short vlogs but later chose online video games as her main video content. As years passed, her content also changed, with her adding reaction videos, challenges, and more. As of now, she has accumulated more than 32.5 million subscribers.

Due to her ever-growing popularity, people are becoming more invested in learning more about her, especially her personal life. There are questions like, “Is SSSniperWolf married?” And we can answer that SSSniperWolf isn’t married.

Is SSSniperWolf dating a boyfriend?

As of this writing, SSSniperWolf isn’t dating a boyfriend. The YouTuber hasn’t provided any hints on having a possible partner, and it seems she is relishing her singlehood.

However, she was in a long-term on-and-off relationship with a fellow YouTuber Evan Sausage [his real name is Evan Young]. The now-former couple first made contact with each other in 2013 when SSSniperWolf messaged Sausage.

In her YouTube video of November 3, 2015, titled How I Met My Boyfriend, SSSniperWolf revealed how her initial conversation with Sausage went. Recalling what he had told her, she said, “I would drag my balls through a field of broken glass just to hear you fart through a walkie-talkie.”

Sausage’s message made SSSniperWolf laugh hard, and the two continued talking. As their conversation continued, they liked each other. However, it was hard for them to steer the wheels of a relationship as they were yet to date anyone then.

Despite the obstacles, they began dating and eventually moved in together. Fast forward to 2016, the love birds broke up, but they later reconciled their togetherness. Moreover, they even got arrested after having a fight and screaming at each other.

Speaking more of that fight, SSSniperWolf and Sausage got into a fight in August 2016, after which Sausage removed SSSniperWolf’s picture as his wallpaper and used the image of a random girl. This resulted in SSSniperWolf getting mad, and she started to scream.

The neighbors got annoyed and called the police, after which the duo was arrested. Explaining the situation, SSSniperWolf said in one of her videos, “I wasn’t even screaming for help or anything.”

“I was just screaming like, ‘I hate you! I fucking hate you!’ It’s just really stupid, and I come back inside, and I start screaming again. I guess the neighbors heard. I don’t know which neighbors, but somebody called the cops on us.”

Things again went south between the two in September 2016 when SSSniperWolf revealed in her video that she and Sausage were taking some time off dating but still living in the same house as roommates.

The break-ups and patch-ups continued in the following years as well. However, the details of their relationship continuously decreased over the years as they began to maintain privacy.

In 2019, SSSniperWolf and Sausage bought a home together in Las Vegas for $2.9 million. In May 2020, they seemed to be still together as SSSniperWolf mentioned in her Q&A video that she doesn’t have any ex-boyfriends.

After that, not much was known about the celebrity couple until February 2022, when they sold their Las Vegas house at a whopping price of $4 million. It has since been assumed that SSSniperWolf and Sausage have broken up.

It’s unknown when and why they parted ways. SSSniperWolf and Sausage still follow each other on Instagram, but Sausage hasn’t been active for years. Besides, he hasn’t made any new posts on his social media handles since July 2018.

A brief look at SSSniperWolf’s Wiki

SSSniperWolf is an English-American YouTuber who currently resides in Glendale, Arizona. She also has a house in Los Angeles. As of this writing, she is 29 years of age. Born in 1992 in Liverpool, England, she celebrates her birthday every year on October 22.

Her real name is Alia Marie Shelesh, and she also goes by the name of Lia or Little Lia. There isn’t much whereabouts about her parents, except that her father is Greek and her mother is Turkish. When she was six, she and her family moved to Phoenix, Arizona.

Apart from her parents, there were three more members in her family, but it recently got reduced to two. They were her younger brothers, Bakir and Paul Shelesh, and younger sister Ranya Shelesh.

Bakir, age 28, recently died when the Shelesh family was on vacation in Hawaii. As per the Kauai Police Department, he was bodyboarding at Wainiha Bay on Kauai when he suddenly lost his board, after which he got pulled into deep water.

After hours of search, officials found Bakir unresponsive and face-down in the water. The rescuers performed CPR on him while taking him to a nearby hospital. And although he briefly regained a pulse, he was still in critical condition. Unfortunately, Bakir died in the hospital on August 6, 2022.