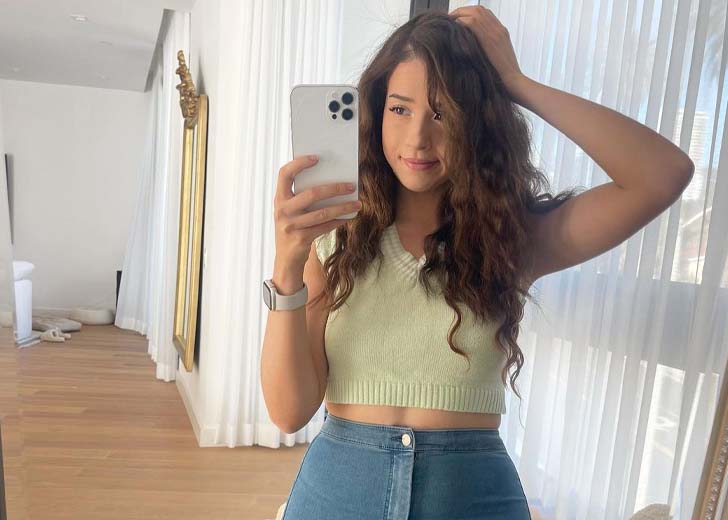 Imane Anys, popularly known as Pokimane, has opened up about her decision to keep her dating life away from her limelight.

The famous Twitch streamer recently sat down on the couch to have a conversation with YouTuber Anthony Padilla. Their talk – which was almost 27 minutes long – was later shared via Padilla’s YouTube channel on Friday, May 13, 2022,

The two talked about several things, including rumors about Pokimane, hateful attacks on her, fear of losing everything, safety, etc. One of the interesting topics came up almost at the end of the video, which was her dating life.

When the chapter about Pokimane’s dating came up, the two internet celebrities initially had a fun talk. “Dating,” told Padilla, to which Pokimane said, “I’m a 25-year-old who is interested in people sometimes.” “Whoa. Wait, you date people?!” Padilla added funnily.

“I’m dating them all,” said Pokimane while making a funny voice and then erupted in laughter. After some fun talk, the conversation shifts to some seriousness as Padilla mentions that people want to know about her dating life.

“Do you purposely keep that separate?” he asked. In reply, Pokimane said, “I had seen so many instances where people would try to accredit a female streamer’s success to their male partner in the industry. Like yeah, that’s just this person’s girlfriend.”

“And I was like, you know what, I’m not gonna date anyone publicly ever. So, anything that I do or accomplish cannot be accredited to anyone else but myself,” Pokimane added.

Pokimane also noted now that she has grown and become an accomplished person on her own, it has become a different kind of issue in terms of dating someone publicly. She explains that it’s because she is constantly in the public eye.

“And even if I were to be in a relationship, that person would need to be okay with also being in public. And that’s a lot to ask of people. Maybe someday, I’ll feel comfortable enough, and I would need to make sure that my partner doesn’t care too.”

However, the Twitch streamer also realizes that the things she said are a big question mark in that regard.

After she said all that, the conversation came to an end. Padilla talks a bit more with Pokimane about what the future holds for her. And then we get a small gag reel, and the video ends.

Besides this, she has also talked about maintaining privacy over her love life in the past. In one instance in mid-2020, she spoke about keeping her professional and personal life separate.

She said, “For me, this also creates a healthier divide between my work life and my personal life ⁠— which is an area where the lines are already pretty blurred…I personally want to experience my relationships without the scrutiny of an online audience.”

As of now, Pokimane hasn’t revealed anything about her relationships and if she is presently dating anyone. But, her fans have been speculating for a long time that she might be in a romantic relationship with Kevin.

Pokimane addressed the dating rumors in one of her streams with Kevin in February 2022. But, she neither confirmed nor denied it. Instead, she said, “Listen. Um. I just feel like it’s weird to talk about stuff like that [on stream],” to which Kevin also agreed by saying, “it’s personal life stuff.”