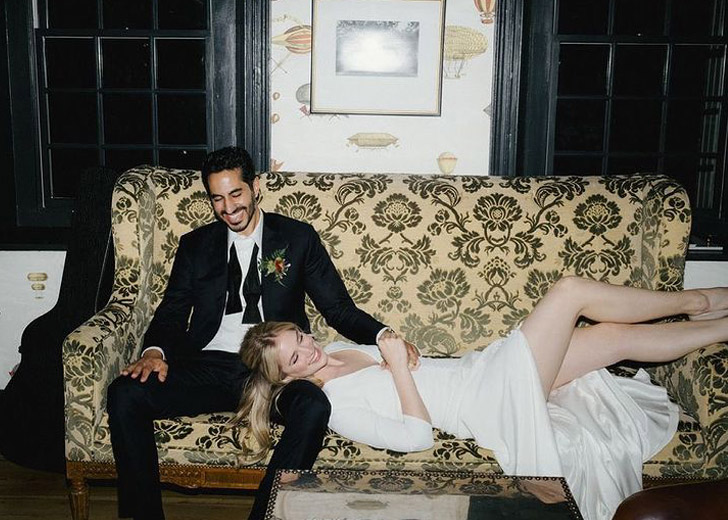 Nieku Manshadi couldn’t be happier than to settle down with the love of his life. He is married to Elizabeth Lail, who played Guinevere Beck in Netflix’s hit thriller You.

Speaking of their marriage, the intimate ceremony was held earlier this year, on April 24, 2021. Only a limited number of people, 22 precisely, were invited due to the COVID-19 restrictions, and all of them were vaccinated.

As mentioned earlier, Manshadi and his now-wife shared the wedding vows on April 24, 2021, as per Brides’ exclusive feature published on May 6, 2021.

The intimate ceremony was held in Hasbrouck House in Stone Ridge, New York, a place that holds a special place in the couple’s heart — it was the same place where they celebrated their first dating anniversary.

The wedding was well-planned, keeping the COVID-19 restrictions in mind. Due to that, the number of guests was limited to 22 only. If not, the couple would have easily invited over 200 people, as per the actress.

Lail also told Brides that she and her husband decided not to wait or delay the wedding and invited only family members to keep it safe for everyone.

“We were also the only guests on property, which gave us peace of mind to be in our own little bubble,” she added.

Elizabeth Lail and her husband Nieku Manshadi on their wedding day. (Photo: Forged in the North)

Additionally, she revealed that they didn’t have a strong vision of their wedding plans and went on with what just felt right. Eventually, over time, the wedding revealed itself to them “as more and more creatives became involved.”

On his special day, Manshadi donned a dark navy suit accompanied by a black bowtie, inspired by his grandfather. Similarly, the bride looked stunning as she wore a “one-of-a-kind wedding dress with silk-lined buttons, a deep-V neckline, fitted bodice, and three-quarter-length sleeves,” which was specially designed by Andrea Hawkes.

During their first look, the soon-to-be-married couple exchanged letters that they wrote for each other. “It was such a beautiful moment to really connect with one another before adrenaline sweeps you away,” Lail said of that moment.

Manshadi had made a wedding playlist for the special occasion. When his to-be-wife walked down the aisle, ‘Crazy Love’ by Van Morrison was played. Manshadi and Lail recited both traditional and Baha’i vows and exchanged wedding bands from Catbird and ILACrescent.

After they officially became husband and wife and kissed each other, ‘Elephant Gun’ by Beruit was played. “I haven’t stopped singing these songs since,” said Lail. All of them then dined together at the venue’s in-house restaurant.

Summing up the special day, Lail said, “Our wedding was so small and intimate we couldn’t help but have every aspect reflect a part of us. It was primarily our two families coming together for the first time. We laughed and cried the whole way through.”

Elizabeth Lail and her husband Nieku Manshadi posing for wedding photos. (Photo: Forged in the North)

Although the day went amazingly, there were moments where the duo thought they had to postpone the wedding due to the pandemic. Thankfully, it didn’t happen as all of the guests got vaccinated in time for the wedding.

Nieku Manshadi and Elizabeth Lail Got Engaged in 2020

What started as small talk friends of a mutual friend became life partners. They began dating, got to know each other more clearly, and all of it strengthened their bond.

After being in a romantic relationship for a long time, Manshadi thought it was time to take a further step. In August 2020, they were in Montauk, New York, for a “much-needed long weekend.”

Taking the perfect opportunity, he went down on his knees and proposed to her with Lail’s grandmother’s wedding ring in his hand. She said yes, and they got engaged. Recalling the moment to Brides, Lail said;

“We were at our own little bonfire during sunset on the beach making s’mores when Nieku proposed with my grandmother’s wedding ring.”

Eight months after being engaged, they tied the knots. Since then, they have been relishing their days as a married couple who supports their other half in thick and thin.

Elizabeth Lail’s husband, Nieku Manshadi, is a well-respected person in his line of work. He is a certified pediatric dentist licensed to provide safe treatments by the American Academy of Pediatric Dentistry.

In his introductory video on Victoria Pediatric Dentistry & Orthodontics, he mentioned that he always wanted to work in a profession where he could help others be healthier.

When he was a child, he had an excellent dentist, and it left a huge impression on him. He followed the same inspiration and went on to study to become a dentist.

His Safari Dental & Orthodontics profile suggests he received his Doctorate of Dental Surgery degree from the University of the Pacific Arthur A. Dugoni School of Dentistry. He also has completed a two-year pediatric dental residency at Boston University.

Additionally, Manshadi’s profile says that he sees treating kids as a privilege and a chance to make dental visits fun for his patients and their families.

His love for his profession has taken him to several places worldwide, including Ecuador and the Philippines, with little health care.

Pulling off the Modern Cowboy Look: What You Need in Your Wardrobe