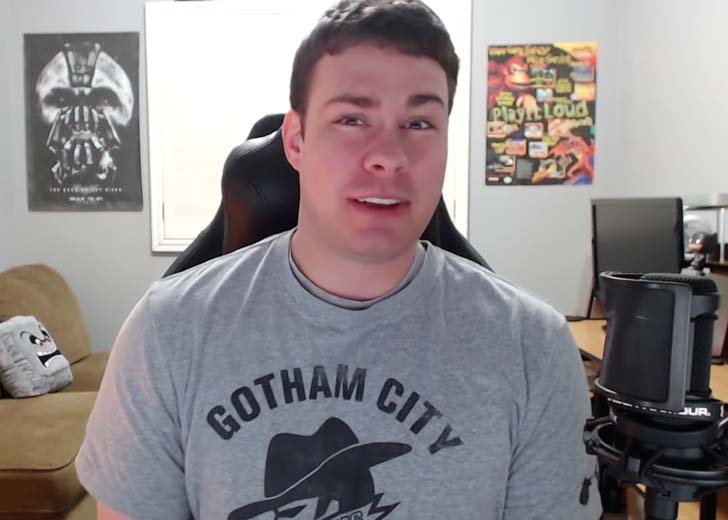 Moo Snuckel is a popular online gamer who gained the limelight by uploading gaming videos with comedic commentaries on his YouTube channel. He initially started sharing videos of games like Call of Duty: Black Ops, Grand Theft Auto, and Garry’s Mod.

As of now, he has been making videos on multiple games of different genres such as Among Us, Minecraft, Mario Kart, Uno, Phasmophobia, Fall Guys, Evil Dead, and many more. Thanks to all that, he has garnered over 3.34 million subscribers and 550 million views.

With his rise in the online community, people are getting familiar with him and want to learn more about him. And since the gamer is only seen doing commentary without revealing his face, some are wondering if he has revealed his face or not.

Snuckel isn’t the one to reveal his face while playing online games. And it’s because the gaming YouTuber rarely clicks any pictures and is quite shy of the camera, which might sound weird to some as he is a YouTuber.

Despite that, when his fans asked him for a face reveal, Snuckel didn’t let them down and posted one of his recent photos – which was taken a year ago. On April 15, 2014, he took to his Instagram handle to post a year-old picture.

Moo Snuckel revealed his face for the first time in 2014 (Photo: Instagram)

In the picture, he was donning black glasses, a black t-shirt with some blue stripes, and a backpack that matched his t-shirt. “This was taken in July of 2013. I think it’s the last picture I’ve been in. I’m not too big with pictures, but a lot of people ask me what I look like,” he wrote in the caption.

At the end of the same year, on December 30, 2014, Snuckel uploaded a YouTube video where he revealed what he looked like at the time. He did that as his fans were requesting a real-time or live face reveal, a thing that he again didn’t decline.

What is his real name? Is it Moo Snuckel?

Those who have been watching the YouTuber’s video since the start might know that Moo Snuckel isn’t his real name. Moo Snuckel is just his YouTube channel’s name, which he shortened/changed to Moo in 2017 – he also changed his Twitch channel’s name.

But what’s the meaning of Moo Snuckel? While some users at Urban Dictionary might define the word as a male version of a camel toe, the real meaning of it is unknown. The YouTuber has only revealed that he came up with the name after seeing a Moose at the Jackson Hole.

Now coming over to the main topic, what is Moo Snuckel’s real name? The real name of the gamer is Brock Barrus. Additionally, it’s known that Barrus celebrates his birthday every year on June 17. Besides that, there is little to no information about his early life due to his privacy.

Moo Snuckel is a married man with a daughter

If you are up-to-date with Snuckel’s videos, you might have noticed that he is a happily married man and even shares a daughter with his longtime wife, Lauren. Besides, the YouTuber has done a couple of Q&As with his wife on his channel.

To speak a little about the couple’s relationship, they had known each other for almost or over a decade before tying the knots. In a Q&A video of August 2019, one fan asked if there were changes in Snuckel from 2011 to 2019.

In reply, Lauren, a former elementary school teacher, mentioned that she has known her husband since 2006 and that he hasn’t changed that much in all the years she has known or spent with him.

It’s presently unknown how the couple met each other and when they officially began dating. But what’s known is that they shared the wedding vows in September 2016. In the same Q&A video, Lauren revealed that she had brought tickets for a concert as a combined gift for their upcoming anniversary and her partner’s birthday.

A year after they got married, in September 2017, the couple welcomed a baby girl whose name is yet to be disclosed. In a Q&A video of January 2018, the gaming YouTuber said that he is managing his time as being a father requires more responsibilities.

He also said that his wife had some complications during pregnancy and that he wants one more kid, but that might take some more years. He then said he doesn’t care much about gender but would now love to have a son to see the boy version of him and his wife as they already have a daughter.

In addition, he said he was pumped after learning that he was welcoming a baby girl. And when he was asked if he would reveal his daughter’s face or name, he said that might not happen. But he did say that his daughter’s internet name was Briana.

Snuckel’s wife had talked more about privacy during the Q&A video, as mentioned earlier. When a fan asked the YouTuber if he would ever consider having a second channel or playlist that is all about his life with his family and friends, he directly replied with a no.

He said, “Absolutely not. I’m a pretty private person, and I also hate being on camera. It’s one of the reasons that I don’t do facecam. There are other reasons, but that’s one of them, and I don’t think Lauren wants to be on camera.”

Lauren then added she didn’t want to be on camera but didn’t mind doing these Q&A videos. “I think they’re fun but I just feel like that’s great that Brooke likes doing this and I think he’s good at it but it’s not what I would choose for myself.”

She continued, “It doesn’t make me excited or anything. And also for our little girl, I feel like she’s so young and innocent. I kind of want to protect her from this whole scene, and I know a majority of people are just curious, but there are always those few people who know take things a little too far, and so, for her sake, we try and protect her.”

As of now, the family of three happily resides in their Utah residence. The couple has been married for over five years, and their togetherness has lasted longer than that, considering their dating relationship.