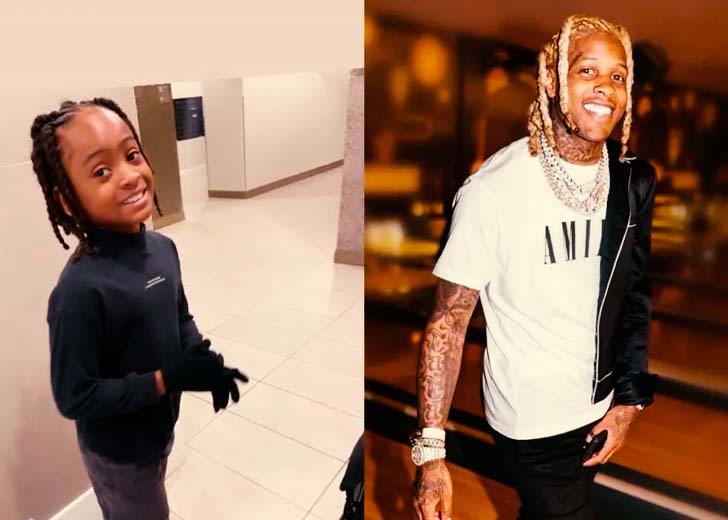 Lil Durk roasted his son, Zayden Banks’ mother a couple of days after his birth.

Rapper Lil Durk is a dotting father to his six kids.

He often posts pictures with his children, and all of them share his last name “Banks.” He even has a tattoo dedicated to all of them.

While it seems like he has a good relationship with his babies, not the same can be said with their baby mamas. Only two of Lil Durk’s baby mamas are known, while others have kept themselves out of the spotlight.

It is reported that the rapper has at least four baby mamas. He does not speak much about his kids’ parents.

But he has once roasted the mother of his third child, Zayden Banks, on Twitter.

Banks was born in November 2013. Soon after his birth, his father took to Twitter to share his excitement.

However, just a few days after his baby boy was born, Lil Durk roasted the unknown mother on Twitter on November 10, 2013.

He wrote, “Zayden moma want bring em she prolly got [expletive] in her mouth.” He did not give any context to his tweet.

However, many believed he was not on good terms with his son’s mother. Almost three years later, he hinted about how Banks’ mom was.

Similarly, on March 4, 2017, he wrote, “Zayden got sheena attitude 😵,” possibly saying that his son was like his mother.

Since then, he has not discussed his second baby mama on social media. To date, the real identity of Sheena has not been revealed.

Lil Durk first became a father at the age of 17. He shared his first child, Angelo, with his then-girlfriend Nicole Covone.

Of all six kids, Lil Durk has, only Angelo and his sister Bella share the same mother. Unfortunately, the rapper parted with Covone shortly after their daughter was born.

Banks was born a couple of months after Bella. He grew up together with his sister. Lil Durk often tweeted how adorable the two babies were and how they looked alike when they were kids.

In 2014, the rapper became a father for the fourth time. He welcomed his son Du’mier that year, but it is unknown who his mom is.

Soon after, Lil Durk fathered Skylar. Like Banks and Du’mier’s parents, the identity of Skyler’s mother is unknown.

However, it is reported that Tameka Kute is her mom, but it has not been confirmed by either party.

The rapper’s sixth and youngest child is Willow. He welcomed her with his partner India Royale.

Lil Durk and Royale started dating in 2017, but they had an on-and-off relationship. It was reported that they got engaged in September 2018 and welcomed Willow in November 2018.

Until 2021, there were many rumors that the pair had parted ways. But it seems like the couple will be tying the knot soon.

In December 2021, the rapper proposed to his baby mama during a concert in Chicago. He went down on one knee and asked Royale to be his wife.

The latter said “yes,” and the duo has been together ever since.