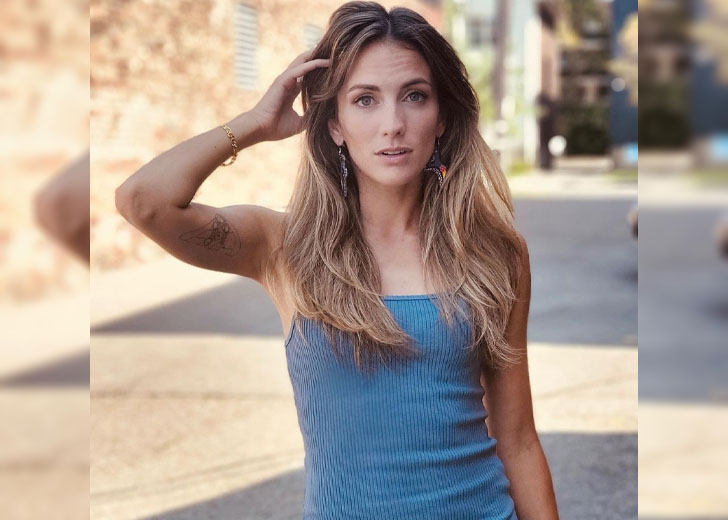 Julie Nolke is a talented Canadian actress, writer, and comedian. Apart from that, she is also a YouTuber with over 965,000 subscribers on her self-titled YouTube channel.

She uploads comedy sketches every Thursday on her channel and has gained over 123 million views in total. One of the most famous videos on her YouTube channel is “Explaining the Pandemic to my Past Self,” which has a total of 6 videos with collective views of over 40 million.

Due to her popularity, her followers have been wondering if she is single or married to a husband. While going through her social media handle, some tidbits on her personal life have been discovered.

Is Julie Nolke Single or Married?

The 2020’s Top Canadian Breakout Creator is neither single nor dating anyone else as of this writing. Instead, she is in a blissful marital life with her boyfriend turned husband, Samuel D Larson, aka Sam Larson.

The love birds shared the wedding vows two years ago, on June 20, 2019. Before walking down the aisle, they were dating each other for a very long time. As far as it can be traced, their togetherness dates back to the July of 2015.

However, as both of them prefer to keep their togetherness private, none of them have been vocal in their dating life, neither in front of the media nor on their social media. Nonetheless, they occasionally share pictures alongside each other.

For instance, on June 20, 2020, Nolke shared a couple of pictures on her first wedding anniversary. She accompanied the pictures with a long caption that read:

“This is Sam. He’s pretty cool. He’s behind the camera on my videos so you never see him. He is also a squatter in my house but I don’t mind. We’re best friends and last year we got matching rings that we use to assemble and power up. Anyways, I’m a pretty big fan. Love you forever you big goober.”

Well, it seems as if Nolke and her husband are relishing their marital life, and they are keeping their relationship as private as they can.

The Canadian native created her YouTube channel on October 2, 2011, with the name of Feeling Peckish. Although the channel was created in 2011, Nolke began to upload videos usually after May 2015.

Initially, she used to share cooking videos. While she stood in front of the camera, her now-husband, Sam, worked behind the cameras. Later, she was hired by Tastemade and developed ideas for videos.

Years later, she changed her YouTube channel name to Julie Nolke and began sharing comedy skits and vlogs. As she continued to share the same type of content, her channel grew more and more.

Nolke’s rise in popularity has directly influenced her income too. In addition to her income from her YouTube channel and acting career, she earns a good sum from her merch store. Currently, Julie Nolke’s net worth is reported to be around $1 million – $2 million.

Hailing from the suburbs of Calgary, Canada, Nolke was born in 1990. Just recently, she turned 31 years old, having celebrated her birthday on the 24th of August. As per her date of birth, her zodiac sign is Virgo.

On her special day, she posted a couple of snaps of herself and captioned it by writing, “If you ain’t 31 today, where you at?”

The details of the YouTuber’s parents and siblings are yet to be known. Although the identity of her parents is unknown, she occasionally shares pictures about them. For instance, on August 20, 2021, she shared some pictures and mentioned in the caption that her parents visited her and gave her an early birthday present.

Going into the details of her education, she is an honorary graduate of Toronto, Ontario-based York University with a B.F.A. in Acting.

How Tall Is Julie Nolke?