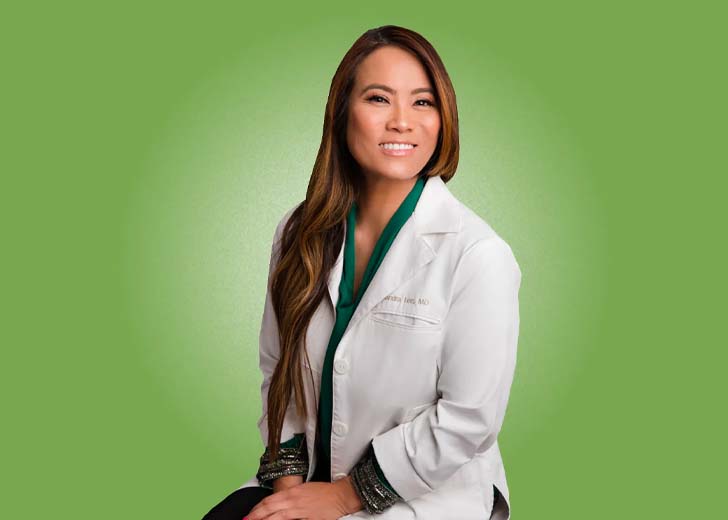 Dr. Sandra Lee is a well-known board-certified dermatologist and skin cancer and cosmetic surgeon. She is best known for her appearance on the TLC show Dr. Pimple Popper; thus, she is also known by the show’s name.

She has also appeared on other TV shows as a guest dermatologist, such as The Doctors, Home & Family, and The Dr. Oz Show. Similarly, she has been a guest on multiple national TV shows such as Today, Jimmy Kimmel Live!, Live with Kelly and Ryan, and more.

However, Dr. Lee first gained fame after uploading videos of her surgery procedures and more on her YouTube channel. As of this writing, her channel has garnered more than 7.49 million subscribers and 1.99 billion total views.

Dr. Lee was born on December 20, 1970, as Sandra Siew Pin Lee. She was raised in Queens, New York, by her Chinese parents. While little is known about her Chinese-Malaysian mother, it’s known that her father is a retired dermatologist.

So, it’s evident from where she got the inspiration to become a dermatologist. After completing high school, she enrolled at UCLA and worked part-time as a medical assistant in Downtown Los Angeles.

Upon graduating from UCLA, she joined medical school at the Drexel University College of Medicine and completed her studies in 1998. Later, she did an internship at Allegheny General Hospital and finished her dermatology residency at Southern Illinois University.

After doing all that, Dr. Lee moved to San Diego for a while to expand her experience and knowledge with laser, dermatological and cosmetic surgery. Finally, she went to Upland, California, and joined Skin Physicians & Surgeons.

In 2017, the famed dermatologist started her solutions-driven skincare line called SLMD Skincare Products. Finally, in 2018, TLC approached her for the TV show Dr. Pimple Popper, to which she agreed, and the show started airing in the same year.

Celebrity Net Worth reports that Dr. Lee has accumulated a healthy net worth of $5 million. She has made such a fortune as she has got her hands involved in many things.

Dr. Sandra Lee has accumulated a healthy net worth through her work (Photo: Instagram)

Similarly, her skincare line and merch have also helped her earn a good amount. However, her primary source of income is her work as a dermatologist and skin cancer and cosmetic surgeon, plus her appearance on the TLC show Dr. Pimple Popper.

Additionally, it has been reported by The Sun that Dr. Lee charges $120 per visit as a consultation fee. Likewise, a patient has to pay around $500 and $600 for a benign extraction, which isn’t covered by medical insurance.

However, the costs would be cut off if her patient agreed to let themselves be filmed as Dr. Lee performs her work, either by the crew of TLC’s Dr. Pimple Popper or by Dr. Lee herself (for her YouTube channel).

If the TLC crew films her patient, the production company pays the fees for the patient’s treatment and Dr. Lee’s medical and appearance. And if Dr. Lee films the patient for her YouTube channel, she will not charge any amount and will make the patients anonymous.

Coming over to how much Dr. Lee earns from her TLC show, she has previously mentioned that she didn’t make anything. As per Men’s Health, she revealed in 2018 that she was “not getting paid anything for the show, really.”

And despite not getting paid much, Dr. Lee still felt “so fortunate to have this — that this has been offered to me — and I’m so fortunate that they’re making me look good.”

But now that the TLC show has gotten big and gained more viewers since it first aired, Dr. Lee must have been paid a handsome amount for her appearance per episode. Sadly, even if that’s happening, there is no disclosure of that amount to date.