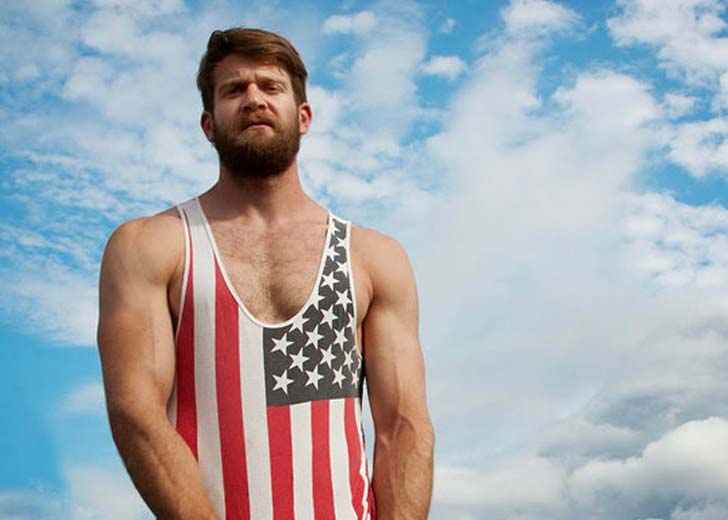 Colby Keller came out as gay when he was 15.

Colby Keller has been out and proud for years and has earned fame for his work in the gay adult industry. However, his coming out was hard, especially when his parents found out he was gay.

To start the story from the start, the adult star was primarily raised in the suburbs of Houston, Texas. His father hailed from a Ukrainian working-class family and worked as an engineer. His mother was raised in a strict Dutch Reform household and later became an evangelical Christian.

Keller often joined his mother at the local “Pentecostal, speaking-in-tongues church.” And growing up as gay was hard for him in different aspects. He would often go to Barnes and Noble and buy adult gay magazines.

Similarly, he would store all those adult magazines and VHS in a box underneath the sink of his private bathroom. However, it wasn’t there when he went to take something out of that box. And he immediately knew that his mother had found it.

At that time, Keller was only 15 years of age. When that incident happened, his father was very supportive as he cried and did everything to comfort Keller. But his mother took the news very hard, and the mother-son duo had a clash.

During his interview with The Daily Beast in 2016, Keller said, “She found a box of p–n under my sink. They confronted me about it. I was hiding in my room, and through the door she was throwing Bible verses at me. I was crying.”

“It was very emotional. At one point, she said, ‘I wish I had a gun so I could blow your brains out all over the sofa and then kill myself.’ I remember thinking, ‘Who’s the Christian now? [expletive] you. Your true faith is coming through. What’s more important to you?'”

“It was a true revelation. My father told her, ‘If you ever touch him, or if he ever hurts himself, I’m getting a divorce and taking you to court. It was not a pleasant moment for anybody, and it was tense for a while,” Keller added.

Colby Keller tried to commit suicide after coming out

The following days after coming out were harsh for Keller as he even tried to commit suicide. He told The Daily Beast, “I actually did try to commit suicide, not very effectively. I tried to drink a bottle of shampoo.”

After saying that, he laughed softly and explained what happened at that moment. And the situation went like this: Keller’s father wasn’t home the weekend after he came out, and his mother had again said something mean-spirited to Keller while they were about to go to the church.

All of that resulted in Keller running upstairs to his bathroom, and as he was crying, he took a sip of the shampoo. Recalling what he realized at that moment, he said, “this isn’t for me. It was a very serious thing, but it wasn’t that smart.”

He continued, “I don’t know how seriously I wanted to die. I think it was really that I was desperate. I didn’t see a way forward at that point in time, and it was a really uncomfortable situation to be in.”

“There was nobody to support me. My mother came up and found me and said, ‘You’re so disgusting,’ and then other family and friends took care of me.”

Since that moment, his mother has often come around, but he stopped calling her mother and began calling her by her first name, “which really got the point across.”

Additionally, he told her, “This is who I am, you have your beliefs, and some of your beliefs are wrong, and you have a choice: You love me the way I am or not — and if not, there are repercussions to that.”

Nonetheless, during his appearance on Nico Tortorella’s podcast, The Love Bomb, the adult movie star revealed that he loves his mother and that “she really is a beautiful human being.”

By 19, Keller was already in a proper relationship with his boyfriend. His interview with The Daily Beast revealed that he and his then-boyfriend were in a monogamous relationship for two years.

In addition, Keller’s mother was aware of that relationship, and she was living with the gay couple with a “certain degree of acceptance.” Keller’s boyfriend had some mental health problems and schizophrenic episodes.

Due to that, several members of Keller’s family wanted him to break up. However, Keller’s mother showed “real compassion” toward his boyfriend. As a result of her kind behavior, Keller’s relationship with his mother gradually improved.

Fast forward to 2017, Keller lost his father in 2014. Similarly, he was an established gay star in the adult industry. However, his mother was still unaware of Keller’s profession.

Colby Keller is in a marital relationship

As of 2017, Keller was in a blissful marital relationship with his husband, Karl Marks. Marks is Keller’s publicist and an artist, writer, and performer.

The two first met in 2006 when Marks resided in Washington D.C., and Keller lived in Baltimore. Although their first date didn’t go as planned, they caught up later. They reportedly got married in January 2016 and have since been together.

Keller’s work in the adult industry has never been a problem to Marks, and it hasn’t affected their relationship. “I’m not a jealous person,” Marks told The Daily Beast. As of this writing, the married couple may still be together.

Posted on August 23, 2022August 23, 2022
James Majoos has not shared any of his personal information, including his age.
Read More