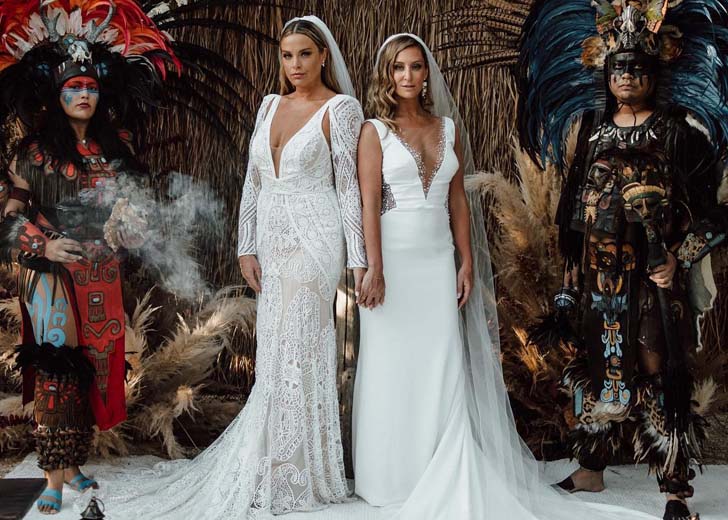 Congrats to the couple on their recent wedding!

Christie Murphy has happily walked down the aisle with her life partner Jamie Martin.

On Saturday, April 23, 2022, the Big Brother 21 houseguest got married to her girlfriend turned fiance, Martin, and made her her wife.

The couple chose Tulum, Mexico, as their destination to share the wedding vows. Several close friends and family members were there to attend the romantic ceremony.

Speaking about their wedding to US Weekly, the two mentioned that they had already chosen Tulum for their wedding place on their seventh date, which was also in Tulum. At the time, they had joked about eloping.

While they didn’t elope at that time, they agreed to get married in Tulum sometime in the future – which they did. As Murphy and Martin went on, they said, “It was the most special day of both our lives.”

“We can’t stop talking about it and looking at the photos in awe! All the months of planning and picking out every little detail just came together and it was perfect! We both just keep saying that it was literally the best night of our lives. Such a blast and so connective.”

The newlywed couple then added that they are incredibly thankful for how seamless their wedding week has been. “We loved having our friends and family there to experience the biggest day of our lives.”

The only thing missing on their biggest day was their two pups, Ruffles and Beans, but they said they were heading home “tomorrow to see them.”

Christie Murphy and Jamie Martin are together since 2020

As US Weekly mentioned, Murphy met her future wife shortly after she decided to leave 2019’s Big Brother season 21.

In the January 2021 episode of the Hello, Friends podcast, Murphy recalled the decision to leave the MTV show and said, “I don’t know, I just [had] a very strange feeling … that something bigger is coming and if I was away in Iceland [filming The Challenge], it wouldn’t have happened.”

“I was like, ‘I’m telling you, I think I’m gonna, like, meet my soulmate this week or something,’ like, kind of joking. … Three days later, I met Jamie,” she added.

Martin’s Instagram handle lets us know that they had already met and started dating by September 2020. Around the same time, Martin began featuring Murphy on her Instagram handle and sharing pictures where Murphy was with Martin’s family members.

In the same podcast, Murphy also mentioned that Martin was awesome and moving in with her to Jersey that weekend. “I live in Jersey, the house that I was just talking about that I bought, that’s where I still live. She’s from Brooklyn and now she moved two bridges over to me. We’ve been slowly moving her in.”

On August 22, 2021, Martin went down on her knee and proposed to Murphy while they were in front of the Eiffel Tower in Paris, France. They made their engagement announcement one day later, on August 23.

In late December 2021, the engaged duo held an intimate ceremony with their immediate family only so that they could acquire a marriage license in their New Jersey residence.

And just a few months later, they officially had a destination wedding ceremony. We wish the couple nothing but the best.

Who is Christie Murphy’s wife?

As of now, there are little to no details available about Murphy’s wife, Martin. It’s so because she only came into the limelight following her relationship with Murphy.

Additionally, the reality TV star hasn’t shared much about her now-wife. So, for now, there is little information that can be gathered about her — thanks to her Instagram handle.

Martin celebrates her birthday every year on June 25. As her birth year is undisclosed, her age isn’t known. On her birthday in 2021, she shared a picture of herself and thank her well-wishers for their warm wishes. “LOVE YOU ALL SOO SO MUCH! Thank you everyone for an unforgettable birthday,” she wrote.

Her mother’s name is Linda DiBartolo Martin – her father’s name remains unknown. Similarly, as per our knowledge, she has two siblings named Michael Martin and Jaclynn Martin — she might have more siblings.

Furthermore, Martin’s Instagram highlights show that she is an avid traveler. Some of the places she has been to include Paris, Rome, Mexico, Ibiza, London, and Florence. The details about her profession are yet to be disclosed.