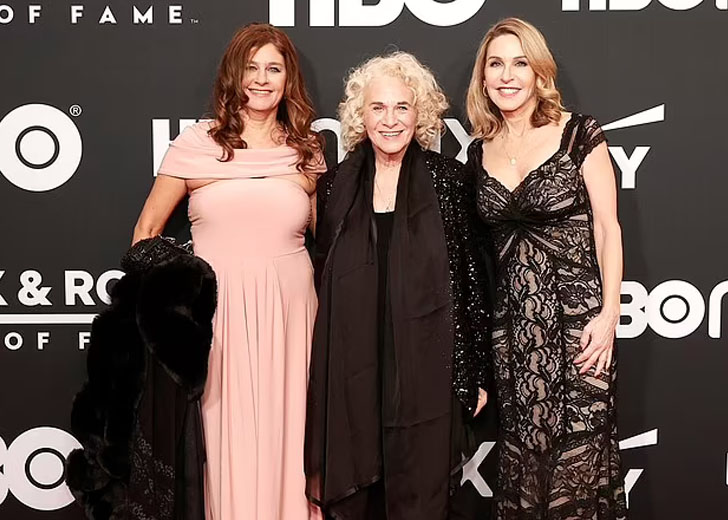 Meet the kids of the exceptional singing sensation, Carole King!

Carole King is a legendary singer-songwriter who has had a long and glorious career. King began her storied career as a staff songwriter at New York’s famed Brill Building and then as a solo performer.

But aside from her career, she is also a devoted mother to four children who mean the world to her. Meet the children:

In 1959, the A Natural Woman singer married the American songwriter Gerry Goffin. Following that, their eldest daughter, Louise, was born in 1960.

Louise Goffin is a recording artist, Grammy-nominated producer, and podcaster who graduated from Studio Engineering in December 2019. With eleven albums under her belt, she has a rich musical background.

Louise’s first album, Kid Blue, was released in 1976, and she has since released other albums, including Sometimes a Circle in 2002, Bad Little Animals in 2008, and This Is the Place in 2018.

Furthermore, Louise’s 2020 folk-pop album, Two Different Movies, was just released. Louise is also an actress, where she featured on  Really Rosie and Gilmore Girls: A Year in the Life.

She and her mother sing together on the classic Gilmore Girls opening theme recording of Where You Lead, and both appeared in the 2016 revival, embracing her family’s roots. Louise was also nominated for a Grammy in 2012 for her contribution to Carole King’s album A Holiday Carole. Her work with The Goffin & King Foundation also pays tribute to her musical roots.

In addition, she started the foundation a year before she started at Blackbird to honor her parents’ legacy by helping aspiring songwriters through educational programs.

During her enrollment, it hosted its first songwriting retreat on the weekend between sessions, with several Blackbird graduates (then-classmates) helping to run sound and record live performances.

Sherry Goffin is an actress who has been in movies such as Chicken Soup With Rice and Really Rose, among others.

She has been in television shows such as American Masters, You’ve Got a Friend: The Carole King Story, Troubadours, and many others. She also walked in her mother’s footsteps, as she is a talented singer and songwriter.

Talking about her personal life, she had previously married her then-husband, Robert Kondor. But, they were unable to continue their marriage, so they decided to split up in 2011.

Despite spending years together, the former couple kept quiet about their children. Currently, Sherry appears to be unmarried and residing in the United States.

King experienced motherhood again during her second marriage to Charles Larkey. King and the Snow Queen vocalist married in 1970 and welcomed their daughter, Molly, in 1971.

Molly Larkey is a Los Angeles, California-based artist, writer, and organizer. She graduated from Columbia College with a BA in 1994 and Rutgers University with an MFA in 2000. From 2000 through 2009, she had numerous exhibitions in New York, including shows at PS1 MOMA and The Drawing Center.

Her art was included in the international sculpture survey “The Shape of Things to Come: New Sculpture” at the Saatchi Gallery in London in 2011.

Unlike her mom and sisters, Molly decided to stay out of the Hollywood spotlight, and therefore, she pursued her profession as an artist. And today, she is a successful artist on her own.

King and her second husband Larkey also gave birth to their youngest son, Levi, in 1974, completing the famous musician’s family. However, the duo divorced in 1976.

In 1977, she married Rick Evers, but their relationship only lasted a year before Rick died in 1978. King’s fourth and final marriage, which lasted from 1982 to 1989, was with Rick Sorenson, and she didn’t have any more children during her last two marriages.

Levi Larkey is the youngest member of the family. Levi was born in 1974, and, unlike his older siblings, he prefers to reside in the shadows.

Very little is known about Larkey, but he is as involved in entertainment as his family. According to IMDb, Larkey featured in the movie 44 in 2007 as a boom operator and in 1985, he was also credited as a performer on the Care Bears Movie’s soundtrack.

Carole king tried to keep her children away from the spotlight

King kept her children out of the limelight for the most part as they grew up. On the other hand, Louise, Sherry, Molly, and Levi have all carved themselves into successful careers in show business as they’ve grown older. Even yet, her eldest remembers the difficulties of having a renowned mother.

On 30 June 2016, Louise told the Independent, “I embrace it, but I didn’t use to,” indicating she was very “tired” of other people’s intentions when she was a little girl.

Furthermore, she also mentioned the challenge of following in her mother’s footsteps, which explains why it took her a while to be acknowledged as an individual.

She said, “It makes it a lot longer journey to get yourself out there, and for people to see you for who you are … it’s not a silver-spoon situation; it’s more of a challenge.” “It’s one of the cards life deals you, which you are powerless over.”