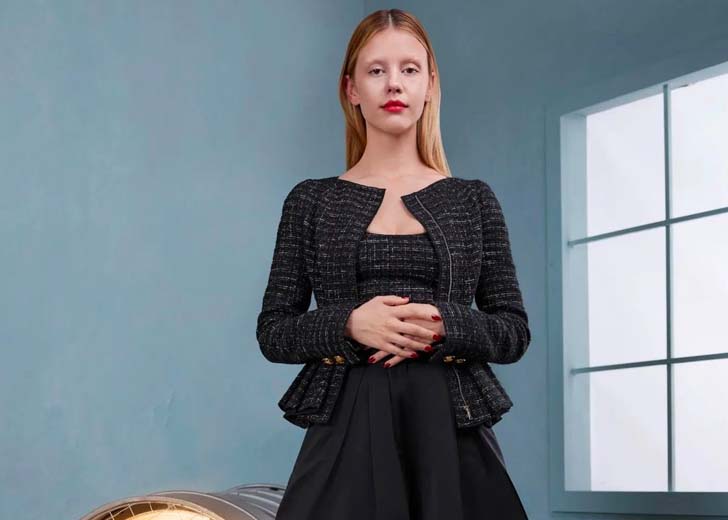 Mia Goth didn’t like her eyebrows when she was a child.

She began modeling as a youngster and had her cinematic debut in Lars von Trier’s Nymphomaniac (2013). Following that, she appeared in the thriller The Survivalist (2015) and the psychological horror film A Cure for Wellness (2016).

Besides her modeling and film career, Goth’s eyebrows have been a topic of debate ever since she entered the film business. But at present other celebrities have drawn inspiration from her brows as the bleached brow trend has returned in styles.

The English actress wore thin and light brows to red-carpet events almost 15 years ago. While Hollywood celebs revived the style because it was fashionable, Goth’s brows have always been the same.

Does Mia Goth have eyebrows?

Seeing Goth online, many fans wonder if the actress has no eyebrows. Well, the answer is: She most certainly does. Goth has very thin, light blond eyebrows similar to her hair color, often giving the illusion that the actress has no brows.

Despite her fame, Goth’s brows were not always something she appreciated about herself, especially as a child. She admits to finding them “weird” as a child, but as she got older, she stated she learned to embrace them.

In an interview with Into the Gloss, Goth expressed, “For the most part, I don’t do anything to my brows. They aren’t bleached, just naturally light. Maybe when I was a little kid, I thought they were strange, but I realized as I got older that the things that make you different are the things that are special about you.”

Goth’s brows were not only embraced by her but also by her admirers. Social media users were inspired to do the same and accept their natural selves after seeing Goth wear her natural brows. “Rocking my natural eyebrows in honor of Mia Goth,” one Twitter user remarked.

Her pale complexion and brows have become the face of horror films; her appearance in the horror film “X” received a 94% rating on Rotten Tomatoes.

Fans were surprised to hear that filmmakers were admirers of her natural brows and did not ask Goth to adjust her brows for her roles. Her unique beauty—barely seen brows and a waifish, almost ghostly complexion—undoubtedly lends itself well to the role and genre.

When talking about her routines with Vogue, the actress said, “With skin and beauty, it always starts from within. So I try to eat very healthy. Obviously, I like pizza and bourbon at times, but it’s important to have a balance.”

She further exclaimed, “I think it’s always a good idea to mix a burger with some greens. And I pretty much only drink water. I like to wear sunscreen whether it’s rainy or sunny.”

She also revealed, talking about her beauty routine, “Less is always more in both beauty and fashion.”