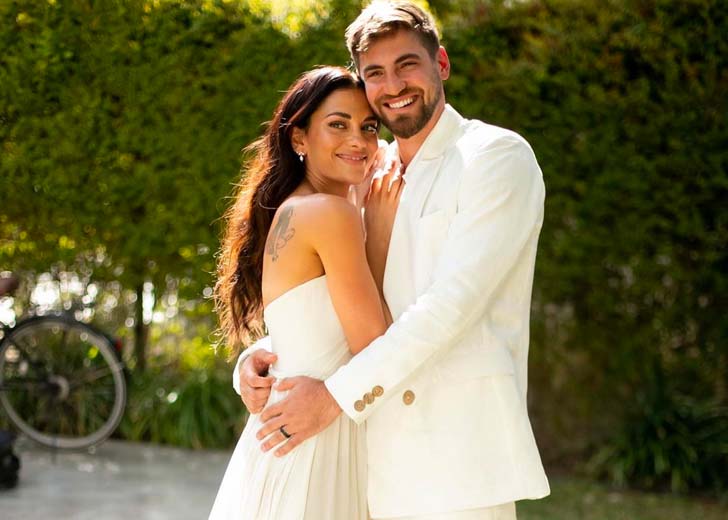 Inbar Lavi stated that her heart is in Israel, but she lives in Los Angeles primarily for work.

Inbar Lavi, best known for her roles in Bravo’s Imposters and Netflix’s Lucifer, married Dan Bar Shira in a bohemian beachside ceremony at the Al Hayam in their native Israel.

Lavi first met Shira, a green energy worker, in the sandy Nevada desert in August 2019 at the Burning Man festival. On September 13, 2021, the couple reunited on the sandy beaches of their homeland Israel to exchange vows and celebrate their marriage with 400 of their family and friends.

The couple was Israeli and was connected to their roots. The actress also told the Brides, “Our family lives here, and we were raised by the Mediterranean, which made us who we are today.”

During the wedding, they incorporated many ethnic customs, including a seaside chuppah, which the bride described as a little conventional and a little untraditional. In honor of her Moroccan heritage, the couple partakes in a henna ritual, costumes, and a drum circle.

Lavi and Shira’s wedding ceremony was significant with the following bohemian beachside party, which included light shows and three different DJs, managed to combine intimacy and a ton of fun. According to PEOPLE, the bride and groom were also inspired by Burning Man, as they met in the Nevada desert.

Likewise, the theme of their wedding was white. Lavi had a personalized look created by stylist Shany Lasry to help her shine and feel comfortable throughout the night. On the other hand, Shira dressed in neutral fabrics that complemented the bright and festive colors of the landscape.

Moreover, the bride and groom hired Steve Bar Productions and Vanessa Events to make their festival-inspired dream wedding come to life. The bride and groom had their youngest relatives walk down the aisle first during the event. After the marriage, the couple throws a party and dances all night with their loved ones.

It’s been years since their lavish wedding. On their anniversary, September 15, Lavi posted a photo of their marriage with the caption, “A full year of pure bliss.” In the post’s comments section, Chris Rafferty also wishes them a happy anniversary.

Inbar Lavi has strong ties to her homeland of Israel

Despite living in Los Angeles, Lavi has a stronger attachment to Israel. She stated that her heart belongs to Israel because her entire family and close friends are there, so it is her home, and Los Angeles mainly works.

Lavi and her husband’s love for their homeland is the primary reason for their lavish wedding in Israel. However, because they have many good friends in Los Angeles, the couple also had a small wedding in their garden.

Moreover, in an interview with ynetnews, she was asked how she maintains the Israeli mentality or tradition while living abroad.

She responded, “I’m married to an Israeli man, so at home, we only speak Hebrew, and we’re both very connected to Israel. I also have a fantastic family who has welcomed me and with whom I celebrate holidays and Kiddush every Friday night. That’s what keeps me going.”