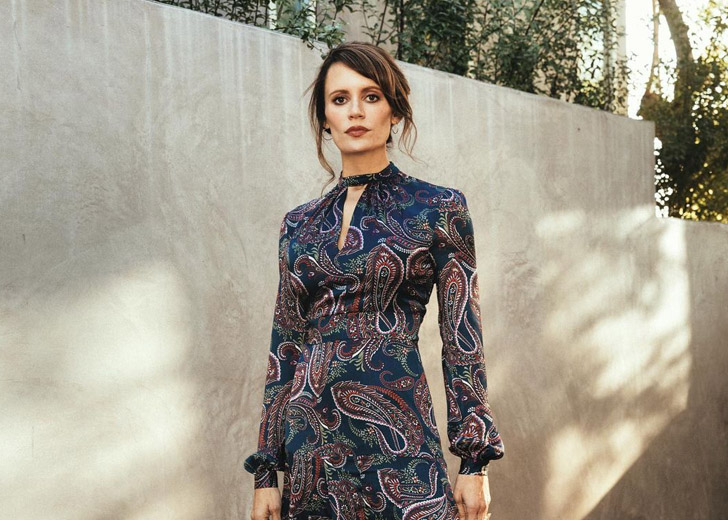 All about Emily Swallow’s married life and net worth.

Emily Swallow and Chad Kimball exchanged their wedding vows on August 26, 2018. She was said to have a boyfriend back in February 2016, but nothing was confirmed. Fans were obviously surprised by her unexpected marriage two years later.

As for the wedding, the couple got married in a private ceremony in the company of their close friends and family in Washington, DC. Swallow announced the big news to the world via her Instagram.

She shared a picture with her partner from the wedding day on August 28, 2018, and wrote, “So many photo-worthy moments—some beautiful and some dazzlingly awkward— on the happiest day of my life yesterday.”

Swallow and Kimball first connected at La Jolla Playhouse while attending the Broadway production of Come From Away. She was attending the event to see former co-stars Jenn Colella and Joel Hatch at the time.

The two began talking, and sparks flew immediately. They eventually began dating while keeping their togetherness a secret from the outside world until they found the perfect opportunity to reveal it — their wedding.

Emily Swallow and her husband Chad Kimball on their wedding day. (Source: Instagram)

Fast forward to the present time, and their relationship is still going strong. On December 19, 2021, Kimball wished his wife happy birthday via Instagram. He posted a cute picture with his spouse alongside a brief yet lovely message.

He wrote, “Happy Birthday my beautiful wife!! Wise, funny, curious, compassionate, hard working and an inspiration to me every day.”

On May 23, 2022, Swallow recalled the year 2021 with her husband. She posted a picture with Kimball and wrote a long message.

She said in the message that the past year had been hectic, adding that she had bought a new house, adopted a dog, said goodbye to her father, and traveled for conventions on numerous weekends. She said Kimball had been the best partner she could have hoped for throughout it all.

Swallow noted, “He helps me with the many many many self-tapes I send in, goes down the rabbit hole when I come home from rehearsal with a new bone to pick.”

As of 2022, the duo has been married for over four years. They celebrated their fourth wedding anniversary on August 27, 2022.

Kimball wrote a sweet message, “I love this lady. She is my super sweetheart and best friend. Happy 4th Anniversary pardner,” alongside a picture from their wedding.

Similarly, to mark their 4th anniversary, Swallow also posted a picture of her wedding card on her Instagram and wrote, “Four years ago we decided to set out on a very different kind of adventure than anything either of us had undertaken.” However, the couple has yet to have children.

Swallow began her career in Broadway theatre. She appeared in various productions, including A Midsummer Night’s Dream, King Lear, The Taming of the Shrew, High Fidelity, Cat on a Hot Tin Roof at the Guthrie Theater, and Much Ado About Nothing.

During her early career, the actress also participated in the premieres of the off-Broadway productions Romantic Poetry and Measure for Pleasure.

The Supernatural star made her acting debut in the war drama The Lucky Ones in 2008. She appeared in the world debuts of The Country House by Donald Margulies at the Geffen Playhouse in Los Angeles, Louis Jenkins’ Nice Fish, and Romantic Poetry by John Patrick Shanley at the Manhattan Theater Club.

For her portrayal of Kate in The Taming of the Shrew, she received the Falstaff Award for Best Female Performer in 2010. In 2013, her career bloomed when she got a chance to play the role of Kim Fischer in the American drama series The Mentalist.

One of Swallow’s most prominent appearances to date was when she was introduced in the Supernatural season 11 premiere as Amara, a primordial being that existed before the dawn of time.

The American actress also starred as The Armorer in Jon Favreau’s space western series The Mandolorian alongside famous personalities including Pedro Pascal, Gina Carano, Nick Nolte, and many more.

The Mandolorian star’s estimated net worth is about $2 million, and swallow earned this significant sum of money through her acting career.

Swallow has thus far made appearances in four films and more than 20 television shows. Not to mention, she earns most of her money from performing, but she also receives additional compensation through endorsements and promotions.

The NCIS star receives a big yearly wage. Similarly, she has over 160 thousand followers on her Instagram and thus likely earns some money through her Instagram by doing brand endorsements.