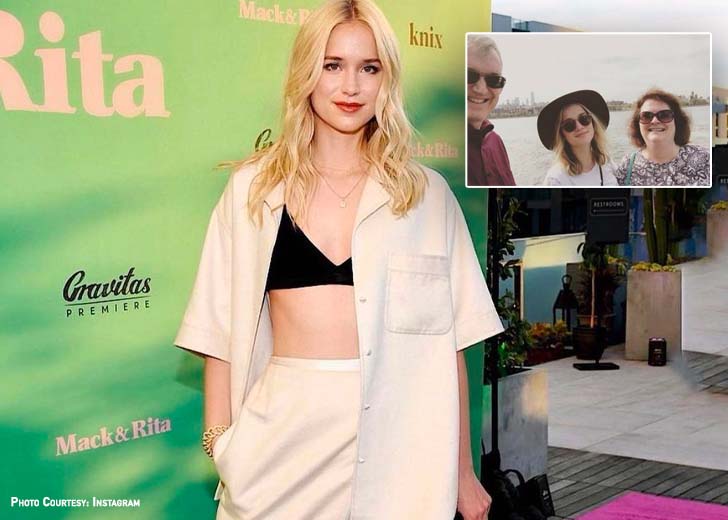 All about Elizabeth Lail’s parents and her early life.

Elizabeth Lail is an American actress known for her recurring role as Anna in the fantasy adventure drama series Once Upon a Time, which aired for seven seasons on ABC.

Lail became more famous when she got a role as a broke NYU graduate student, Guinevere Beck, in the psychological thriller series You based on the novels by Caroline Kepnes.

Lail was welcomed into the world by her parents Dean Franklin Lail and his wife, Kay Lurene Surratt, on March 25, 1992.

The actress was born in Williamson County, Texas but spent most of her childhood in Asheboro, North Carolina. She is not the only child — she also has an older sister, Kathryn Dean Lail.

You’s star Lail attended Asheboro High School in North Carolina. She then enrolled in the University of North Carolina School of the Arts, where she graduated in 2014 with a Bachelor of Fine Arts degree.

While attending college from 2011 to 2014, Lail primarily focused on short film productions like Model Airplane and Without.

When she landed an audition for ABC’s Once Upon a Time, she had just relocated to New York City to pursue theatrical work. She was later cast as Anna in the show’s fourth season, giving her the chance to put some of her stage combat training from the UNCSA to use as the sword-wielding princess.

Lail has discovered that her time at the UNCSA School of Drama has equipped her for a career as a professional actor as she has continued exploring new parts. Her training “really prepared me for anything that could possibly come my way,” she told the Winston-Salem Journal.

In 2017, in the Lifetime/Netflix television series You, starring Penn Badgley and Shay Mitchell, Lail was given the role of Guinevere Beck. At the 45th Saturn Awards, she was nominated for Best Actress in a Streaming Presentation.

In March 2021, Lail was set to star as Mack, the film’s title character, opposite Diane Keaton in the comedy Mack & Rita.

Lail’s husband, Nieku Manshadi, is a well-respected certified pediatric dentist. According to the introductory video in Victoria Pediatric Dentistry and Orthodontics, he noted that he had always wanted to work in a profession where he could help others be healthier.

As per Safari Dental & Orthodontics, Dr. Manshadi went to the University of the Pacific Arthur A. Dugoni School of Dentistry, graduated with a Doctorate of Dental Surgery degree, and finished his two-year pediatric dental residency at Boston University.

Lail and Manshadi first met through their mutual friend in Williamsburg, where they got to know each other. Shortly after meeting each other, they started dating.

In August 2020, when the pair were vacationing in Montauk, New York, Manshadi popped the question with Lail’s grandmother’s wedding ring. After being engaged for over eight months, they exchanged wedding vows on April 24, 2021.