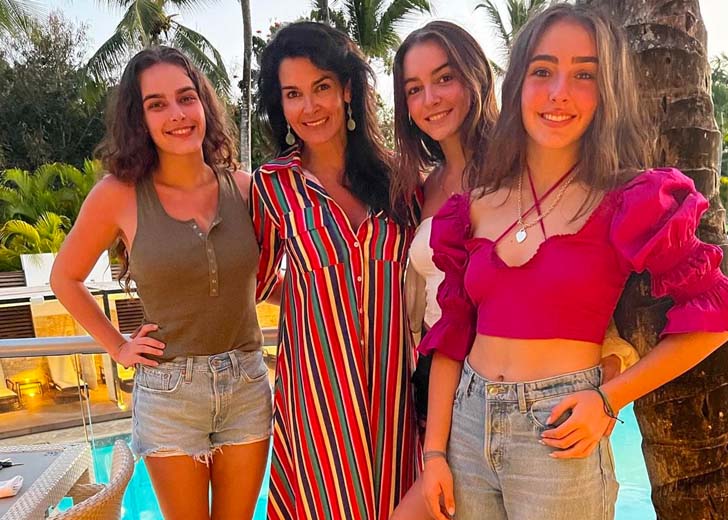 Angie Harmon, 50, is an American model and actress best known for her role as Ryan McBride on Baywatch Nights and Abbie Carmichael on Law & Order.

At the age of 15, she won Seventeen’s modeling contest in 1987 and appeared on magazine covers such as Cosmopolitan and Esquire.

Apart from being an established actress and model, Harmon is also a devoted mother. The model has three daughters with her ex-husband. Learn more about her daughters and ex-husband.

She was a guest on The Tonight Show with Jay Leno when Leno welcomed Sehorn as a surprise guest. Sehorn approached her, knelt down on one knee, and proposed.

“He’s like a steady tugboat while I bring on the shock waves,” she said of her ex-husband in a 2011 interview with Good Housekeeping.

She continued, “As time goes on, the different discoveries you make about each other. You think you know that person inside and out that you know every single inch of that person, and then you find something new.”

“Communication is a huge, huge thing in marriage,” she added at the time. “And it doesn’t matter if it’s uncomfortable or brings up bad stuff. You really have to have the guts to talk to each other.”

Later, Harmon and Sehorn announced their divorce after 13 years of marriage in November 2014. Their divorce was finalized in 2016. However, the reason behind their separation is unknown, as both of them keep their mouths shut on the topic.

After 5 years of separation from her ex-husband, Harmon announced her engagement to soap opera actor Greg Vaughan on December 26, 2019.

They met in 2017, and their genuine love for one another was wonderful to see on social media platforms. But whether they are married or not is unknown.

The actress frequently posts photos of her daughters on social media, whether she’s celebrating one of their birthdays or simply reliving special moments with the girls. The model’s most important role in life is clearly being a mother.

Finley is Harmon and Sehorn’s oldest child. She was born on October 14, 2003, in Dallas, Texas, and she frequently makes headlines for resembling her mother. She graduated in 2022 from Charlotte Christian School, a college prep school in North Carolina.

The model took to Instagram to share several photos from her graduation day and a heartfelt caption.

“18 years. Don’t they go by in a blink? HUGE CONGRATULATIONS to this bright star. YOU DID IT, FINLEY!! We are all so immensely proud of you & all that you have done & who you have grown to be!! Love you more than anything & everything!!!” she wrote.

Likewise, Avery is Harmon and Sehorn’s second child. In June 2005, she was born in Dallas.

She attends Charlotte Christian School in North Carolina, like her older sister Finley, and plays volleyball and basketball there. In January 2020, she was reportedly named Athlete of the Week and appeared in a photo with her sports gear on her mother’s Instagram page.

Emery is their youngest child. She was born in 2008 and has a large social media following. The teen frequently posts photos of herself with her family and friends to document special occasions in her life.