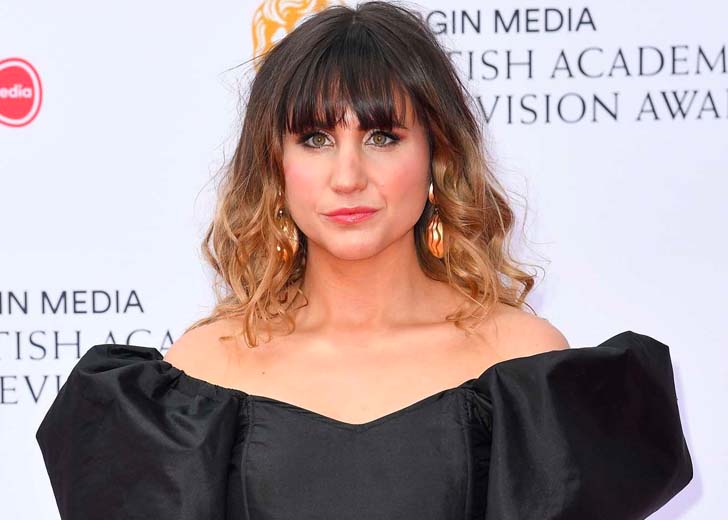 “It’s so embarrassing,” Natasia on walking down the aisle.

Natasia Demetriou has been somewhat open about her life, either family or personal, especially when she is a guest on The Adam Buxton Podcast.

A couple of years ago, on April 25, 2018, the English comedian paid a visit to her podcaster friend, Buxton, and dived deep into her personal life. The 82nd episode of the podcast was later uploaded on November 2, 2018.

In the podcast, Demetriou talked about dealing with breakup pain, the concept of marriage, and why she didn’t want to be in relationships anymore. When the two reached the topic of relationships, Buxton mentioned Demetriou’s recent breakup and asked how long she and her partner were together.

The actress replied that she and her partner had been in a relationship for nearly two years, and it was a good time. After that, she began talking about breakup pain. “I just think breakups are, we are not designed for them as human beings.”

“I’ve had them all. I’ve had ones where you’re like, this is too hard. We’re like ruining each other’s lives, now it needs to end. There’s sort of ease in that because you’re like this can’t carry on. I’m gonna bite the skin off your face and enjoy it any minute now.”

She continued, “but then it’s painful, and it’s tragic. And then there’s a person who you were so close to that you can’t sort of speak to because it ends like messily or it’s loving, it’s respectful, it’s like mutual.”

“I think it’s very weird. Since going through ‘my breakup,’ I am feeling very very very strongly that I never ever ever ever want to be in a relationship again because I’m like, I can’t go through this again. I cannot.”

“I don’t know if having someone to hang out with on a Sunday is worth this. I feel like I have genuinely been walking into walls for the past month or so since it happened,” Demetriou added. Buxton then asked if it was the feeling of never finding someone so nice again.

“No. Just the feeling that without this person, whoever they are, you can’t survive. You can’t function,” Demetriou answered. “Like I need to know what someone’s had for dinner. Why is there no one who wants to tell me what they’ve had for dinner? Why not care what I’ve had for dinner?” she added.

After answering that question, Demetriou opened up about getting into hot yoga to cope with her breakup and how addictive it was. She also told a story about a man who went through a rough patch after his breakup, lost his job, and later got addicted to hot yoga and wrote a book about it.

Similarly, she told another real-life story she heard in the changing room during her hot yoga classes. It was about a woman who had recently lost her husband and wanted to go on a yoga retreat.

As she continued the story, she claimed she didn’t want a life like that widowed woman. Demetriou said, “She’s just like I’ve got all this love to give, and I don’t know who to give it to, and I don’t know where to put it, and I keep trying to be like, oh okay, it’s okay come back now.”

Natasia Demetriou during her press tour for ‘What We Do in the Shadows’ (Photo: Getty Images)

Buxton again raised another valid question and asked, “But you don’t want to get into the frame of mind of like, oh, I never want to get into a relationship because it’ll end.” “Because someone’s going to die?” Demetriou completed the question.

And while answering that question, she said, “Well, I don’t know if that’s right Adam because I just think I was just like she’s doing yoga retreat. She sounds like she’s quite healthy, she could potentially live for another 30 years.”

“30 years of being like come home, please come here. I was just like, I don’t know how up for that I am. I mean, obviously, I’m much more sensitive and vulnerable to all that in my current circumstance of being a breakee.”

Natasia Demetriou as Nadja Doll in ‘What We Do in the Shadows’ (Photo: Twitter)

As the two friends’ conversation went on, the actress discussed her recent breakup. She stated that the split wasn’t a “right yeah type” situation, but she still couldn’t sleep and function and didn’t know what to do. She added;

“I was like, I’m not up for this again. I’m like the next person I get with, listen out ladies and gentlemen, I’m going to marry her because I cannot go through this again. I can’t. I’m like I know it’s only been a month but it genuinely feels like I’ve lived 18 years in the last month.”

And while the What We Do in the Shadows star said she might marry the next person she dates, she also thinks walking down the aisle is embarrassing.

She said, “I can’t think of anything more embarrassing than walking down an aisle. I mean come off it. It’s so holding a bunch of flowers and walking down the aisle, especially if you do like the traditional walk which is like one-step, one-step. I can’t. It’s so embarrassing.”

Later in the podcast, Demetriou revealed she has two sides, one that wants to get married and another that doesn’t want to settle down. Speaking of the one side that wants marriage, she said, “The other half of me is like all I want to do is get married.”

“Someone ask me to marry them, someone commit to me, someone put me in a house, someone give me a sink, someone tell me everything’s gonna be okay forever, and I’ll be safe, and I don’t care if I’m sad or I’m not crazy about them.”

“I’ll be fine because it’s lovely and it’s secure, and it’s life is nice, can be nicer when shared with someone else if they’re the right person.”

The London native comedian also said that things like loneliness don’t fade away from one’s life when they are committed to someone, as she has felt lonely multiple times during her previous relationships.

“It’s effing bleak because you’re like, ‘but I’m doing it, I’ve got the partner.'” Demetriou added. Following that, she and Buxton divulged into other topics like Demetriou’s parents, her parent’s wedding, and so on.

That said, Demetriou didn’t reveal the details of the partner she had broken up with at the time — a thing that remains undisclosed to date. Additionally, her present relationship status is unknown; thus, it couldn’t be told if she is dating a boyfriend or has a spouse.

Previously, there were rumors that the comedian was pregnant and expecting a baby;  however, those speculations were never addressed.

Tags: Natasia Demetriou,What We Do in the Shadows