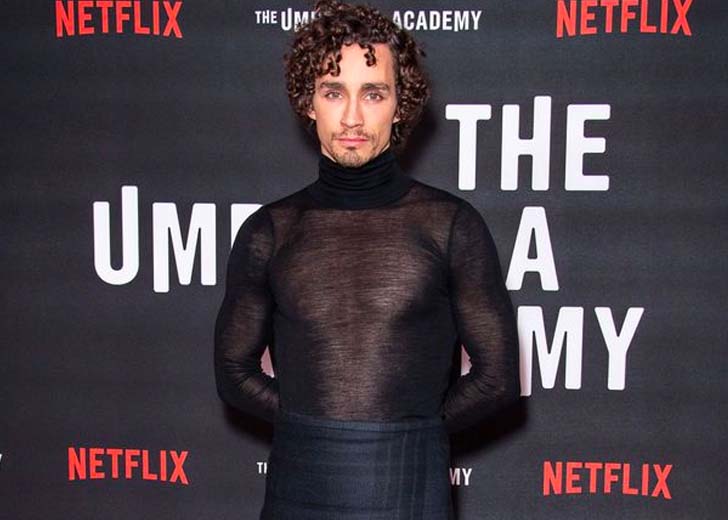 The actor once questioned his sexuality — he identifies as heterosexual.

Robert Sheehan is a talented Irish actor best known for his TV roles in shows like Foreign Exchange, Misfits, and Love/Hate. But he gained the most limelight for his role as Klaus Hargreeves in the hit Netflix show The Umbrella Academy.

For his performance in Misfits, he even got nominated for a BAFTA TV Award for Best Supporting Actor. Additionally, he has been nominated five times for the Irish Film and Television Awards.

Due to the 34-year-old actor’s ever-growing popularity, people are always curious to learn more about him, and one of many things is his personal life.

Is Robert Sheehan married to a wife?

As of this writing, we can confirm that Sheehan is yet to share the wedding vows and settle down with a wife. So, if not married, then is he dating someone? If yes, then someone might be his wife in the near future.

But the answer to that question is also a no. The Portlaoise, Laois native actor doesn’t seem to be dating a girlfriend at the moment, and there have been no reports of him being seen alongside a significant other.

Similarly, Sheehan hasn’t provided any clue about having a partner via his social media handles. To conclude, it only seems perfect to assume that the actor’s present relationship status is single and he is relishing his singlehood.

Robert Sheehan wants to start a family one day

Although Sheehan doesn’t have a partner now, he does want to start a family and have a few kids in the future. He talked all about it during his October 2018 interview with Hotpress.

In the interview, he talked about his sexual evolution from “a d— with a backpack” at the end of his teenage years to a man who knows what he wants in his partner. The actor said that he used to hook up with as many ladies as possible just to gain his peers’ respect.

But that changed in his early 20s when he was in a committed relationship with his girlfriend, whose identity isn’t disclosed. However, as Sheehan’s career in the entertainment industry grew rapidly, his relationship got affected, and the duo parted ways.

As he went on, he mentioned that the split from his former girlfriend took him into a period of promiscuity. He then admitted that he doesn’t regret his multiple hookups, but it did take a toll on his mental health.

Additionally, the Moonwalkers actor stated that physical relationships matter more to him now, and he wouldn’t engage in them unless he is deeply connected with the person. “It would make me feel depressed,” he said about having physical relationship with a person he doesn’t have a strong bond.

Moreover, for him, it isn’t about looks anymore. “Ones that have fostered a sense of individuality have an appetite for humor, having the craic. I think a sense of humor is often a good barometer for intelligence.”

Sheehan continued, “That’s what attracts me. I’m older now; I can really bother to be in a room with somebody that I would have to try too hard with.”

In the end, the actor mentioned that he is hopeful about having a relationship and starting a family in the future and his career wouldn’t interfere with his plans to have children. “Kick out a few babies – oh, yeah.”

“I wouldn’t miss out on that. A career is momentary and that’s why it’s fun… But no [expletive] way – there’s no way I’m not starting a family,” Sheehan added.

Before Sheehan’s relationship status became single, the actor was in a longtime relationship with French-Algerian actress Sofia Boutella.

The now-former couple first met each other on the sets of the movie Jet Trash in Goa, India. Sheehan had only one word – daydreamy – when describing the experience he shared with Boutella.

The two began dating in March 2014 but eventually realized their conflicting schedules, due to which they had to stay apart for weeks. But they used to manage time and continued their togetherness. In his February 2017 interview with The Independent, Sheehan said:

“When you’re two actors, you’re peripatetic, you have to drop everything and go sometimes, and a relationship has to adapt. You’re sometimes staring at five months apart. But it always works out. She gets time off and hops on a plane, I get time off and hop on a plane. The longest we ever spent was just six weeks.”

However, things started to break loose after some time, and they thought it was best to part ways. So, Boutella and Sheehan broke up in late 2017, after almost four years of togetherness.

Later, during his interview with Hotpress in October 2018, Sheehan spoke a bit more about their relationship and split. When his relationship was brought up, he said, “I was, yeah. I was with somebody for nearly four years until the end of last year. We loved each other a lot.”

“We had a similar life, which was problematic. Long-distance. A lot of long-distance, which was tough. It put a strain on things.” Sheehan then praised his ex-girlfriend. “But she’s a magnificent person. She really is. Luckily, we’re still friends. We still love each other a lot. We still acknowledge that.”

Afterward, the interviewer asked him where did it go wrong between them. But, the actor declined to answer the question and said he wouldn’t want to go into that in public, an answer which the interviewer also respected.

In the end, Sheehan stated that the story of their relationship and its ending is as much Boutella’s story as it’s his, and he doesn’t have ownership over it.

Robert Sheehan had questioned his sexuality

While it’s known that Sheehan has had relationships with women, many might find it interesting to learn that he has a couple of relationships with men as well. Besides, the actor once questioned his sexuality — he identifies as heterosexual.

When questioning his sexuality, he decided to get a bit drunk and experiment to know if relationships with men could work out for him. Unfortunately, the experience wasn’t as pleasing as he thought it would be.

In the same interview with Hotpress, he said, “I had a couple of experiences when I was younger with dudes where I tried it, experimented, to see if it did anything for me. And it didn’t… I had a few pints; I was quite tipsy – they loosened me up, and then I had pop. I bowed out after a couple of minutes.”

In his January 2019 interview with The Independent, he also talked about how he doesn’t let his sexuality restrict him while shopping for clothes or choosing outfits to wear at different events.

He said, “I think people should feel less restricted by the perimeters of things like ‘menswear’ and ‘womenswear.’ It’s not something that I really give much credence to when I’m buying clothes. I buy mostly ladies clothes.”

“I think to be yourself, first and foremost, that’s the easiest way to think about it,” he concluded his statement.