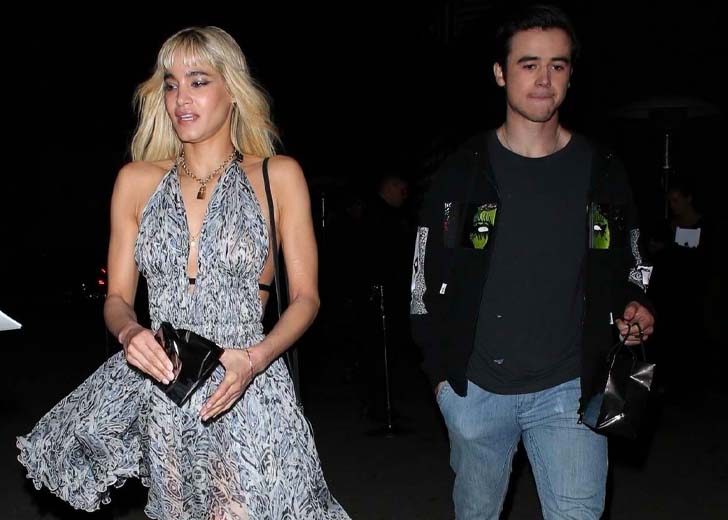 The actress was dating Keean Johnson after her split with Robert Sheehan.

Sofia Boutella is a talented French-Algerian actress and dancer who came into the limelight through her work in the entertainment industry. One of her major achievements as a dancer was in 2011 when she became the main character in late Michael Jackson’s last music video Michael Jackson: Hollywood Tonight.

But she has garnered most of the limelight as an actress. To date, Boutella has primarily appeared in movies only, and they are StreetDance 2, Kingsman: The Secret Service, Star Trek Beyond, Atomic Blonde, The Mummy, and Prisoners of the Ghostland.

Coming over her personal life, it was reported in 2019 that Boutella was in a romantic relationship with a fellow actor named Keean Johnson. And now that the year is 2022 is the couple still together? Here is everything you need to know!

As of this writing, Boutella and Johnson still appear to be together. However, it cannot be sidelined that the couple keeps every detail of their relationship under the wraps.

Yes, that’s correct. The love birds have opted for a silent path as they continue their togetherness without much intervention from the media and public. Neither has posted anything about each other on social media since early 2021.

The last time the Euphoria star featured his girlfriend on his Instagram handle was on February 18, 2021, when he shared a couple of single pictures of her and a music video that also featured Boutella. The video’s title was ‘SIROCCO,’ and Boutella also served as its co-creator.

On the other hand, the last time Boutella posted anything with her boyfriend was on November 2, 2020. She had shared an aesthetic-looking picture of her and her partner. In the photo, she was eating a lollipop while holding a vase – both of them were wearing black glasses.

Going by that, the only thing that comes to mind is the couple is choosing privacy. And for those who might be wondering if they have broken up, there has been no such news like that. So, it’s safe to believe that Boutella is still dating Johnson.

The source mentioned that Boutella and Johnson initially started dating around a year ago – in early 2018 – but parted ways for a short time before rekindling their relationship. “They’re super happy together and seem to be getting serious,” the source added.

In the same week, the couple was seen together as they arrived at the premiere of the 2019 movie Alita: Battle Angel in Los Angeles. Robert Rodriguez directed the sci-fi film, and in it, Johnson portrayed the role of Hugo.

During the premiere, the two looked happy as they posed for pictures, with Johnson’s arms around his girlfriend. Boutella was donning a sheer black dress, whereas Johnson opted for a navy blue suit.

Furthermore, before all that, both of them had taken to their respective Instagram handles to share pictures from their collaboration in January 2019 — the photo was of Boutella covered in paint. Johnson is also a photographer and artist.

They had tagged each other in the picture and the caption as well. And while Boutella had only posted one image from their collaboration at the time – she shared those photos later – Johnson had shared multiple pictures.

Before Boutella was dating her present partner, she was in a longtime relationship with The Umbrella Academy star Robert Sheehan.

The now-former couple started dating in March 2014. And as time passed, their relationship only seemed stronger. However, the only problem was their conflicting work schedules, due to which they had to stay apart for months.

Due to that, Boutella and Sheehan decided it was best for them to part ways. So, after almost four years of togetherness, the two parted ways in late 2017. Later, in October 2018, Sheehan opened up a bit more about their relationship and split.

During his interview with Hotpress, the interviewer brought up the topic of his relationship with Boutella. In reply, Sheehan said, “I was, yeah. I was with somebody for nearly four years until the end of last year. We loved each other a lot.”

After that, Sheehan started praising his ex-girlfriend. “But she’s a magnificent person. She really is. Luckily, we’re still friends. We still love each other a lot. We still acknowledge that.”

When he said that, the interviewer asked him where did it go wrong between them. However, the actor refused to answer the question by saying he wouldn’t want to go into that in public.

The interviewer also respected Sheehan for not answering. In the end, Sheehan mentioned that the part of their relationship and its ending is as much Boutella’s story as it’s his, and he doesn’t have ownership over it.

Five Types of Jackets Everyone Needs All Year Round