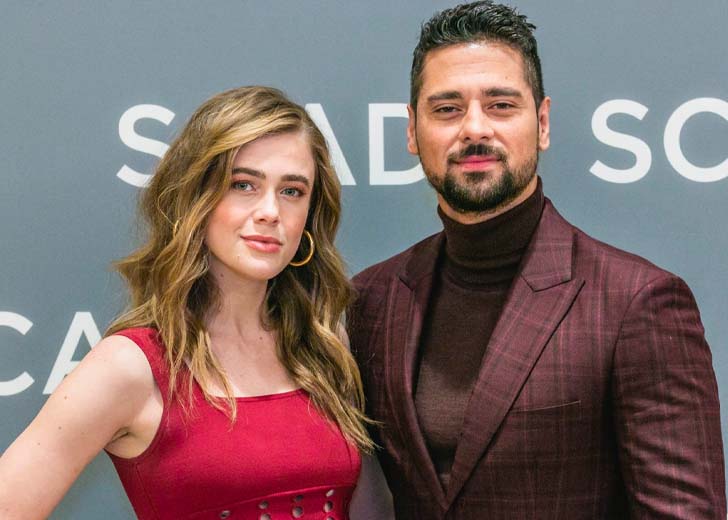 Melissa Roxburgh is very private about her love life.

Roxburgh also appeared as Ensign Syl in the 2016 Star Trek Beyond, Olivia Tanis in The Marine 4: Moving Target, and Michaela Stone in the NBC/Netflix science fiction drama series Manifest.

Melissa Roxburgh was in a relationship with her costar, J.R. Ramirez

Roxburgh’s character dated J.R Ramirez’s character in the beloved Netflix drama Manifest. But it turns out life is a mimicking art for the duo as they dated not only on-screen but were also rumored to be dating off-screen.

Ramirez is a Cuban-American television and film actor. He is best known for playing Detective Jared Vasquez in the NBC/Netflix series Manifest.

Prior to that, he was a series regular on Starz’s Power as Julio and Netflix/Marvel Studios’ Jessica Jones as Oscar Arocho.

Neither Ramirez nor Rozburgh ever addressed their dating rumors as the actors liked to keep their personal and professional lives separately.

However, “They’re dating,” said an individual close to Ramirez back in 2020. Page Six, in fact, confirmed that the on-screen couple had a thing in real life as well.

Ramirez and Roxburgh were seen together at many industry events, including the Harper’s Bazaar Icons party at New York Fashion Week last year. Still, they had yet to openly confirm their relationship.

They were also seen sharing pictures together on their Instagram accounts. “They attempt to keep it a secret for professional reasons, but they are clearly in love. It’s serious,” stated the source.

However, after two years of dating, there were rumors that they might split up. Rumors began to swirl when they stopped following each other on Instagram.

They used to follow each other on Instagram, but their fans believed they had split up when they unfollowed each other.

Roxburgh has followed the Manifest cast except for Ramirez, suggesting that things had gone away between them. According to Live Rampup, the couple is no longer together.

Later, reports circulated that Ramirez saw a model named Miss Gia Marie. However, there are no resources that confirm the news.

Also, her Instagram suggests that Roxburgh has not been seen with any other male. She is single and is now concentrating on her acting career.

In 2017, Roxburgh was in a relationship with her ex-boyfriend, Andrew Jenkins. Andrew Jenkins, of Canadian descent, is also an actor and screenwriter.

The Manifest actress and Jenkins initially met during the production of their film, Lost Solace. They started dating after meeting on set, and Roxburgh posted a photo of her lover while on vacation in Cabo.

They both shared pictures of themselves together on their respective social media accounts. Although the pair didn’t confirm their relationship openly, the sequence of photos they uploaded with cute captions was difficult to miss.

When the actress posted a photo of her partner in a towel, fans went crazy, convincing everyone that they were dating.

However, the relationship didn’t last, and their relationship ended abruptly. Unfortunately, there are no clues on why the couple drifted apart, as they both like to keep their personal life a secret.

Who Is Joe Giudice? Meet the Ex-Husband of Newlywed Teresa Giudice