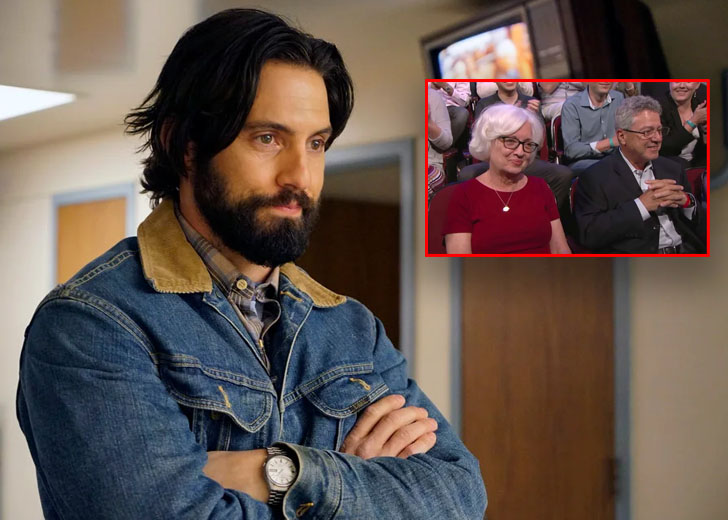 He has also portrayed the character of Jack Pearson on This Is Us since 2016. He has received three Emmy Award nominations for his outstanding performance on the popular hit NBC drama.

Milo Ventimiglia’s Parents Are His Strength

In an interview with extratv on September 23, 2019, Ventimiglia admitted that his parents are his most incredible supporters and role models. He stated that while explaining he spent a lot of time with his family.

Ventimiglia’s parents raised him alongside his two elder sisters with a lot of love and passion.

“My parents are the best. I am very lucky that I got an amazing family,” the actor said at the time.

In the same interview, Ventimiglia’s mother Carol Ventimiglia even added that her son was the best kid who was very obedient and worked twice hard as any other kid while growing up.

When the actor attended the Emmy Awards with his parents and walked the red carpet with them, Ventimiglia proved that he was not just a good dad on This Is Us but was also a great son in real life.

“They’ve declined the invite two years in a row, so this is the year they said they wanted to be here,” the actor expressed on the red carpet while introducing his parents.

Ventimiglia’s Parents Were Absent During His First Two Emmys Nomination

Ventimiglia’s mom, Carol, and dad, Peter Ventimiglia, didn’t attend two Emmy Awards in a row when their son was nominated for the prestigious television award.

They, however, decided to attend the Emmy Awards in 2019 to celebrate their son’s biggest night and achievement.

The topic was swiftly brought up during an episode of Jimmy Kimmel Live in August 2019, when the actor was there to promote his new film, The Art of Racing in the Rain.

He recalled his father being criticized for not congratulating his son on Instagram after receiving his first Emmy nomination in 2017. Peter, on the other hand, wrote about National French Fry Day.

“He caught hell about posting about National French Fry Day,” the actor said. “It’s a priority, french fries. I get it. I’m his son. I understand these things.”

Ventimiglia recalled, “The first time I got nominated, I said, ‘Hey guys, I’d love you to come to the Emmys.’ And my mom was like, ‘No, no, no, I don’t want to be in the big crowd.’ And my dad said he’s holding out for the Oscars. And I was like, ‘OK.'”

Furthermore, the actor revealed that it was the same thing the next year as well.

“Second year, I was like, ‘Hey guys, so do you want to go to the Emmys with me this year? My mom was like, ‘Oh, no, no, no, it’s fine, Sweetheart, you go.’ And my dad is like, ‘I’m holding out for the Oscars.’ And I was like, ‘Dad, these are like the Oscars of TV,'” Milo said while his parents sat nearby in the audience.

However, things were different in the third year.

This time on Ventimiglia’s third nomination, while he was about to make calls to his parents to invite them to the Emmy awards, his parents were upfront and said they would for sure come this time.

Jimmy promptly questioned Ventimiglia’s parents as to what had changed this time.

“You,” Peter said to the late-night talk show host. “You embarrassed us.”

Actor Ventimiglia realized that both his father and his character Jack Pearson have one trait in common: they both rarely cried.

During an interview with the Associated Press on March 14, 2017, the actor said, “That was one thing I know [This Is Us creator Dan] Fogelman and I had talked about a lot was Jack doesn’t cry. I mean, if you really think about it. He cried in the beginning when he was a younger man when his wife was in duress. But you’ve never really seen Jack cry. Why is that? Randall cries. Kevin cries. Kate cries. Rebecca cries. Why does Jack not cry?”

Ventimiglia carried on, “And I, sort of thinking about that myself, I didn’t see my father cry until I was probably maybe 21 years old when his father passed away. And I thought to myself, ‘Wow. I’ve never seen my dad cry until then. Why is that?'”

The actor realized that his father never cried, just like Jack, as he believed that his father was trying to give him strength as a man, as a young man moving forward in life with any adversity or any challenges or problems that are going to come my way.

Furthermore, he said that it was his dad who was giving him so much strength and hope. That even after you are defeated, you have to stand back up and keep moving forward, no matter what.

Tags: Milo Ventimiglia,This is Us