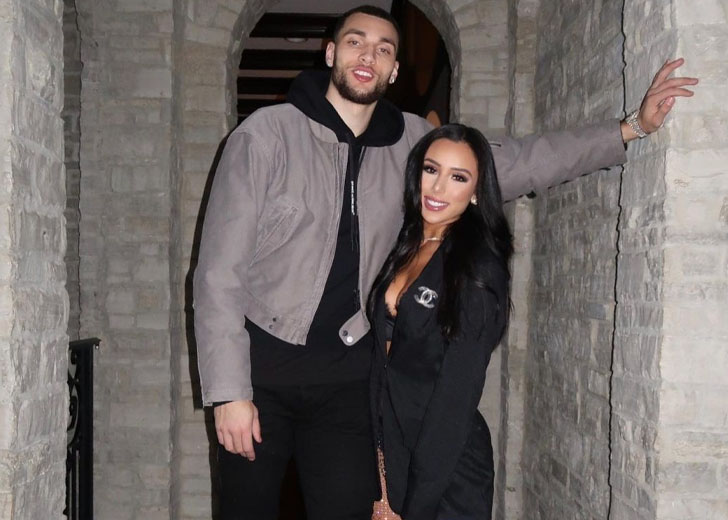 Everything you need to know about NBA star Zach LaVine’s relationship with Hunter Mar.

Zachary Thomas LaVine, aka Zach LaVine, has been a beast in the basketball court ever since he was first drafted in the 2014 NBA draft as the 13th overall pick by the Minnesota Timberwolves.

He played for the team till 2017 and then signed for the Chicago Bulls in the 2017/18 season. In his NBA career, he has managed to be a two-time Slam Dunk Contest champion, two-time NBA All-Star, and was named to the NBA All-Rookie Second Team.

So far, it could be said that he has been having a successful professional career. And in all those highs – and the lows – there was a woman standing right beside him no matter what the condition was. She is the love of his life Hunter Mar.

Who is Zach LaVine’s girlfriend?

LaVine’s girlfriend, Hunter Mar, is a social media personality and a sports enthusiast who came to fame through her romantic relationship with the NBA player.

Not much is known about her early and family life as she primarily stays away from the limelight and prefers to remain low-key. Nonetheless, it’s reported that she spent some part of her childhood in Bothell, a city in Washington State.

Similarly, her Instagram handle suggests that she is currently 25 years of age. Born in 1997, she recently celebrated her 25th birthday, on February 10, 2022. LaVine had taken to his Instagram handle to deliver a lovely birthday wish to his partner.

As for her education, she initially attended Bothell High School. After that, she enrolled at Seattle University. Mar was a soccer enthusiast and used to play it during her university days.

LaVine and Mar first met each other while they were studying at Bothell High School. After getting to know each other well, they eventually began dating each other in mid-2012.

Since then, the couple has always been together despite the highs and lows in their relationships. After completing high school, the now-NBA star committed to the University of California, Los Angeles, and played college basketball.

Similarly, Mar went on to join Seattle University to study and play college-level soccer. Despite the long distance between them, they managed everything out and maintained their romantic relationship.

After LaVine’s college ended and he was drafted into the NBA by the Minnesota Timberwolves, Mar decided to move to Minnesota to be with her boyfriend. To say, the love birds have always stayed together.

Their love for each other could easily be seen through their respective Instagram handles – especially Mar’s. Her Instagram handle is majorly filled with pictures of LaVine and alongside LaVine. She has also shown full support towards her partner’s basketball career.

Zach LaVine and Hunter Mar got engaged in 2020

After being together in everything for almost eight years, LaVine believed it was time for him to take his relationship with Mar to a new level.

While everyone was at home during the pandemic spending time with their loved ones, LaVine and Mar were also doing the same. The couple spent more time together since LaVine began playing in the NBA.

Taking such a perfect opportunity, on April 14, 2020, the NBA player went down on one knee, took out a beautifully crafted big rectangle-shaped diamond ring, and proposed to his girlfriend. She accepted his proposal by saying yes, and they got engaged.

On the same day, the engaged duo took to their respective Instagram handles to share the exciting news. Sharing a picture of him proposing to Mar, LaVine wrote, “My everything. I love you with all of me. It’s been a long time coming, been together since I was 17 !!! My first love and my FOREVER love. U with me forever.”

Similarly, Mar shared the same photo but wrote a different caption, a heartfelt one. “I’ll choose you over and over, without a doubt,” she wrote in one part. After the engagement, she also changed her last name on Instagram from Hunter Mar to Hunter LaVine.

Zach and Hunter’s bond has since been stronger than ever. As of now, they have been together for almost a decade. And the only thing left for Zach is to get married to his high school sweetheart and make her his wife, which might also happen someday.