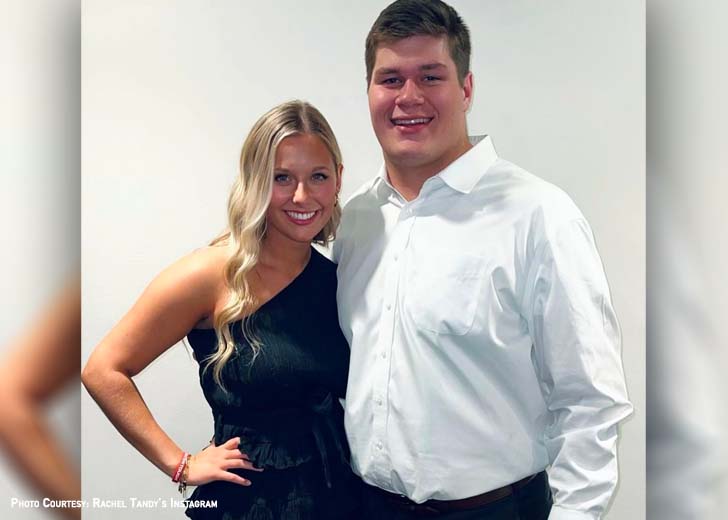 The couple has come a long way and achieved many things.

Tyler Linderbaum has had an athletic environment to grow up in since childhood, thanks to his parents – Todd Linderbaum and Lisa Linderbaum – who were also involved in sports during their time.

As life moved on for Baltimore Ravens’ new center, Tyler found another special person that would help him in other fields. And that person is his longtime girlfriend, Rachel Tandy.

Tyler Linderbaum and Rachel Tandy have been together since 2019

As mentioned earlier, Linderbaum and Tandy have been in a relationship for a long time. And as many love stories, these two’s also started after bumping into each other at the same college compound.

That’s right! The love birds first met each other while attending the same university, the University of Iowa. And it’s been reported that they officially began dating in July 2019, around the end of their freshman year or beginning of their sophomore year.

As time passed, Linderbaum and Tandy held each other’s hand on every path and stayed together, ultimately strengthening their bond. And some aspects of their love and firm togetherness could also be witnessed through their respective Instagram handles.

But while the football star has been a little privative about sharing personal things on his social media handles, his significant other isn’t on the same term as she proudly flaunts multiple pictures with her beau and shares things through the platform.

For instance, on October 27, 2019, Tandy featured Linderbaum for the first time on her Instagram handle. She posted a cute picture of them together along with the caption, “Always the ‘center’ of attention.”

Over two years later, on December 10, 2021, she shared another picture with her boyfriend. In the caption, she mentioned that Linderbaum is still the “center of attention” and she “could not be more proud” of him “today and everyday.”

Since the two began dating, the couple has come a long way and achieved many things. And Tandy’s Instagram post after Linderbaum got drafted by Baltimore Ravens in the 2022 NFL Draft suggests that they have already moved in together.

On April 30, 2022, she posted glimpses of the moment Linderbaum was drafted and wrote, “Football seasons for life?? Count me in. So incredibly proud of you Ty, cannot wait to explore our new home together.”

And most recently, on July 21, Tandy shared some adorable pictures from their photoshoot to mark a new chapter in their life. “3 years, 2 cities, and 1 very lucky girl! So thankful for this life together- love you more,” she captioned her post.

That was her last Instagram post and the last time she featured her partner on social media. Nonetheless, that’s enough for people to know that Linderbaum and his girlfriend have already built a stable and happy relationship that will last for years.

Who is Tyler Linderbaum’s girlfriend?

As of this writing, there is only a little information about the NFL star’s girlfriend, thanks to her Instagram and LinkedIn profile.

Starting with her family, it seems she has an older sibling, a sister named Lauren Tandy. There is no information about her mother, but her Instagram post of March 12, 2019, gives a small detail about her father. The post says that her father survived a life-threatening surgery.

Coming over to academics, she enrolled at Vinton-Shellsburg High School in 2014 and received her High School Diploma in 2018. After that, she joined the University of Iowa, where she is currently majoring in Pre-Pharmacy.

In addition, she has been serving as a part-time student clerk at University of Iowa hospitals and clinics since May 2020. Furthermore, she previously umpired in softball games and worked as a bar waitress, office assistant, and childcare provider.