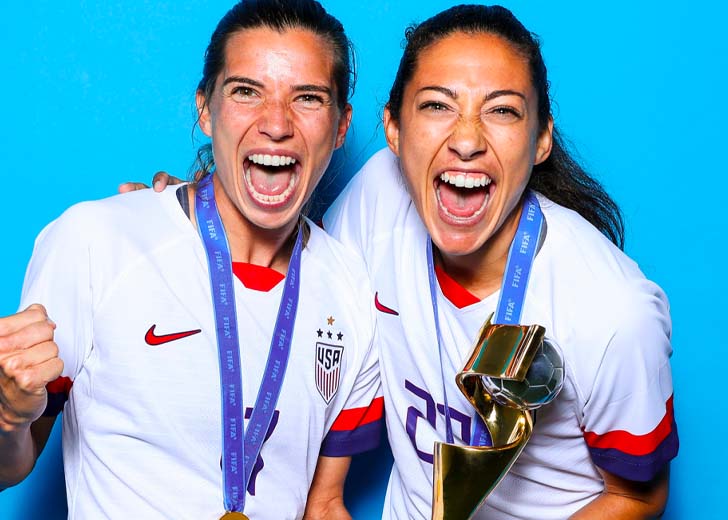 Know the truth behind the rumors!

Tobin Heath is a celebrated name in American soccer history. The professional soccer player for the United States national team and OL Reign of the NWSL has been described as “perhaps the USA’s most skillful player.”

And her career statistics clearly prove so. To date, she has won two gold medals at the Olympics (in 2008 and 2012) and two World Cups (in 2015 and 2019) while playing for the United States national team.

Additionally, she has played club-level soccer for some internationally known clubs such as New York Fury, Paris Saint-Germain, Manchester United, and Arsenal. Since June 2022, she has been serving as a forward for NWSL’s OL Reign.

Heath’s professional career has certainly made noise and given her immense limelight. Due to that, fans want to know more about her, especially her personal life.

The USWNT star has been rumored to be gay/lesbian for a while now. The rumors were initiated after people saw her closeness with her fellow Manchester United and USWNT teammate Christen Press.

And those gay rumors were fueled more recently after Heath’s Instagram post of June 22, 2022. In the post, the soccer player was standing in front of her painting with block letters reading, “I am gay.”

The painting was from Heath’s artwork “Out Now,” which was to be featured in a museum for auction at re-inc, a company co-founded by Heath. And when Heath posted the picture, many wondered if she was coming out of the closet.

And a comment from Ashlyn Harris – an openly lesbian U.S. women’s national team veteran – made it more evident Heath was coming out. Harris’ comment read, “So proud of you. Love you so much, my dear friend.”

However, the comment might also be related to Heath’s hard work on her painting and not her coming out. Furthermore, the rumors of her being gay/lesbian are yet to be confirmed or denied.

As mentioned earlier, Heath’s gay rumors originated through her closeness with fellow teammate Christen Press. And to this date, it’s rumored that the two are secretly dating.

Their dating rumors began around 2015 after the netizens noticed their closeness on and off the field. Over the years, the speculations of their romance continued, and it got fueled after early September 2020.

And the reason behind that was Manchester United announcing that they had signed Heath and Press on a one-year contract for the 2020-21 season. The rumored duo traveled together to play for the English team and had quarantined together.

Similarly, another reason people became more convinced that Heath and Press were together was because of Press’ Instagram feed, where she has shared multiple cute pictures alongside Heath.

Press could be seen posting many couple-y photos alongside Heath and celebrating birthdays and holidays together. And though wishing on birthdays seem normal to many as they are teammates, Press rarely dedicates a birthday post to other teammates.

Their closeness has resulted in people creating Instagram fan pages. Likewise, there are several compilation videos made by fans on YouTube that showcase the two’s cute moments. Last but not least is their shipping name Preath, a mix of their names Press and Heath.

With all the rumors of their romance, another speculation got added when some started wondering if the two were engaged. However, with Heath and Press’s secrecy around their love life, it’s hard to say if they are engaged or married.

And the same answer applies to their romance rumors, as neither of them has confirmed or denied them. For now, the only conclusion is that Heath and Press are good friends and teammates, and the answer will remain the same until any contradicting proof comes out.

Nonetheless, although Heath and Press’s romance rumors are unconfirmed, it’s confirmed that they have ventured past teammates into business partners. The two and other USWNT veterans, Megan Rapinoe and Meghan Klingenberg, are the owners of re-inc.