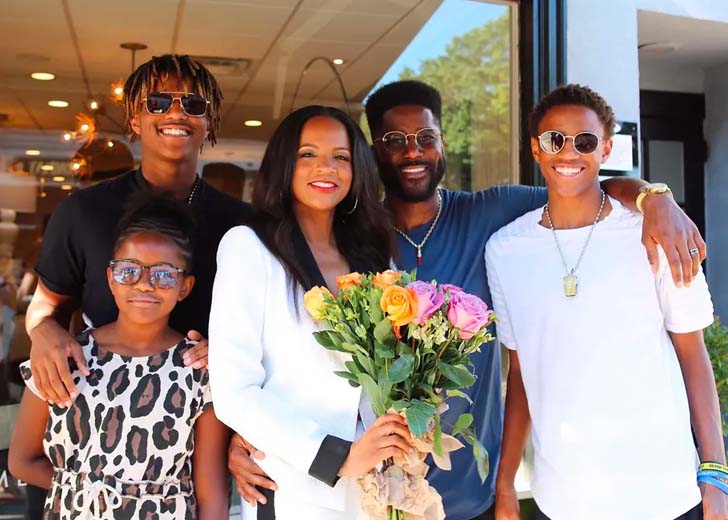 Nate Burleson’s relationship with his wife, Atoya Burleson, is one of a kind.

The college sweethearts have been together for over two decades, and their love is still strong. They constantly gush about one another on their social media, saying how much they love each other and their family.

Throughout the years, the pair have grown strong and achieved a lot together. Moreover, Nate credits his wife for all the success he has earned to date.

From his journey in the NFL as a part of the Minnesota Vikings to being a television personality, Nate’s key to success is his spouse.

In an interview with New Jersey Family, Nate talked about his supportive wife. He said that without her, he would not have succeeded.

Nate started playing football in college at the University of Nevada, where he met Atoya. The pair dated for a couple of years before tying the knot in 2003.

Since then, Atoya has been the backbone of her husband’s career. Nate gushed about his partner, saying, “Atoya, being an intelligent woman, a track star, graduating, going to get her masters. Without her, I wouldn’t have accomplished half of the things that I did. I’m a blessed man so many times over.”

After being together with Atoya, Nate got drafted to the NFL. He was drafted in the third round by Minnesota Vikings as their wide receiver.

He played for the team for 11 years and then retired as a television personality. He started his career in television in 2014 as the entertainment correspondent for Extra.

He also served as the host on the NFL Network on Good Morning Football for almost five years. Since August 2021, he has been a part of CBS Mornings, serving as a co-host alongside Tony Dokoupil and Gayle King.

Nate is not the only one who has grown career-wise. Atoya is also a television personality and a lifestyle influencer.

Nate Burleson posing for a picture with his wife, Atoya Burleson. (Source: Instagram)

According to her website, she hosts a podcast called inSIDELINES. There she talks about being a mother, an NFL spouse, racism, and balancing work and personal life.

Similarly, she also runs a blog dedicated to lifestyle, which talks about cooking, parenting, wellness, and fashion, among others.

While talking with New Jersey Family, the duo talked about raising their kids and sharing their love of football.

Nate confessed that he was excited his sons, Nathaniel and Nehemiah, shared a love for football. He said he never pushed them to like the sport and never forced them to love the NFL.

But fortunately, the love for football came to them “organically.” That being said, football is not an essay game, and the players are bound to get injured one way or the other.

The Burleson sons went to the same, which worried their parents. Nate had second thoughts about them playing football.

But regardless of his worries, he is fully supportive of his sons. Aside from football, Nathaniel and Nehemiah play basketball and run tracks.

Mia, on the other hand, diverted her career path from her brothers. She is more interested in playing tennis, doing art, and theater.