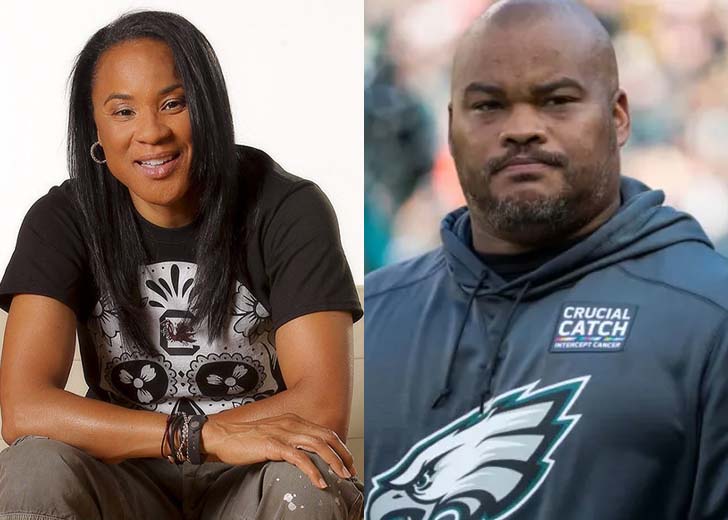 Are Dawn and Duce Staley related?

Dawn Staley is a highly decorated American basketball Hall of Fame player and coach who presently serves as the head coach of the South Carolina Gamecocks in the Southeastern Conference (SEC).

As a player, she has won several accolades, including three Olympic gold medals, two gold medals at the FIBA Women’s Basketball World Cup, and one gold medal at the Universiade — all while representing the Team USA.

Similarly, she is a six-time WNBA All-Star which she won consecutively from 2001 to 2006. Furthermore, she has won seven gold medals as the head coach for Team USA across different major tournaments, including one at the 2020 Summer Olympics in Tokyo.

From her high school days to her international days – and as a head coach – Staley’s achievements are uncountable, and there were no objections when she was inducted into the Women’s Basketball Hall of Fame in 2012.

With such a great career in the basketball field, either as a player or as a coach, one surely earns huge limelight, and fans across the world get eager to learn more about such an established person.

In the case of Staley, many of her fans have wondered about her siblings and if, by any chance, she is related to Duce Staley – a former American football player and current assistant head coach of NFL’s Detroit Lions.

Are Dawn and Duce Staley related?

One of the main queries that fans of both Dawn and Duce Staley have had over the time is if the two are related in any way. Of course, the question might have arisen since Dawn and Duce share the same last name.

Additionally, their involvement in sports – basketball and football – might have led some to think they are related. So, is Dawn Staley related to Duce Staley?

Sorry to disappoint those who were hoping that Dawn and Duce were related, but the answer to that question is a big no. And it only seems like they share the same last name by a mere coincidence, as there is no other thing that might connect them.

Born in 1970, Dawn spent her childhood in the suburbs of Philadelphia, Pennsylvania. She celebrates her birthday on May 4, making her 52 years of age. Additionally, her birth name is Dawn Michelle Staley.

The present basketball coach was raised by her father, Clarence Staley, and her mother, Estelle Staley. She was raised in a household of seven people — thus, she has four siblings apart from herself and her parents.

Her siblings include three brothers named Lawrence, Anthony, and Eric Staley, and one older sister named Tracey Staley. It’s reported that Tracey recently went through a bone-marrow transplant after being diagnosed with Leukemia — Lawrence’s cell tissues were used while all siblings had volunteered.

Now coming back to Duce Staley, he was born on February 27, 1975, making him 47-year-old. He was raised in West Columbia, South Carolina, where he went on to attend Airport High School.

His parents’ name is Lanny and Tena Staley. When Duce was only 13, his parents’ marriage ended in a divorce. Apart from his parents, he has a sister named April Staley.

When his parents divorced, he mostly spent time with his mother. Then, when he became capable, he started a Catch 22 Foundation so that children could benefit from single-parent homes and help single mothers.