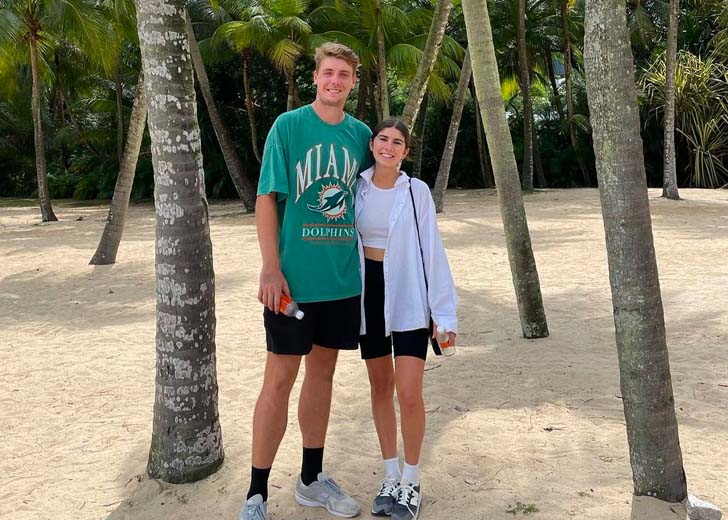 Cameron Green posts his girlfriend’s photo on his IG frequently.

In December 2020, he made his international debut for the Australian cricket team. With the young cricketer rising to fame, cricket fans worldwide are curious whether the handsome 23-year-old has a girlfriend or not.

Well, the answer is yes! Green does have a girlfriend. Read along to find out more about her and their relationship.

Cricketer Green is dating Australian nutritionist Emily Redwood, and he is not shy to post his love online. Redwood can be seen appearing on his Instagram frequently.

Redwood recently got a degree and posted on her Instagram that she wants to use her knowledge to help people better understand foods and nutrition.

“Hello!! I’m Emily, and I’m OFFICIALLY (as of today!!) a University qualified Nutritionist from Curtin university. I am super excited to have finished my undergrad and am looking forward to hopefully completing my master’s in Dietetics next year,” the nutritionist wrote.

Green also posted his girlfriend’s picture of her graduation ceremony on February 14, 2022. He uploaded their smiling picture together in her graduation dress with the caption “Proud” on it.

Similarly, Redwood shared her graduation photos on her Instagram with her loved ones, seemingly family members, and Green was there too. She put a caption that read, “The best support I could ever ask for.”

The cricketer also posted a picture of them together on June 7, 2021, marking their 2 years together. So we can say that the couple has been dating for more than 3 years.

We could see the duo enjoying their vacations and holidays together through their Instagram accounts.

Cameron Green has played cricket since he was 10

Green played cricket for the Subiaco-Floreat Cricket Club while growing up in Subiaco, Perth. Per his Wikipedia page, he began participating in the under-13 league during the 2009–2010 season when he was ten.

His quick improvement allowed him to enter the WACA first grade at 16. Before the 2016–17 Sheffield Shield season, Green was awarded a rookie contract with the Western Australian Cricket Association (WACA), mainly because of his 82 runs per innings average and 20 wickets in eight games in the under 19s national league.

Green was a member of Australia’s team for the limited overs matches against India in October 2020. On December 2, 2020, Green played in his first One Day International (ODI) for Australia against India.

Green scored a century for Australia A in a practice game before the Test series. On December 17, 2020, he made his Test debut for Australia against India.

In the 2020–21 Sheffield Shield season, Green scored his first double century in first-class cricket for Western Australia against Queensland in March 2021 with 251 runs.

In February 2022, he was selected for the Australian Twenty20 International (T20I) team’s tour of Pakistan.

On April 5, 2022, he made his T20I debut for Australia against Pakistan. In Townsville, Australia, he took his first ODI five-wicket haul against Zimbabwe in August 2022.