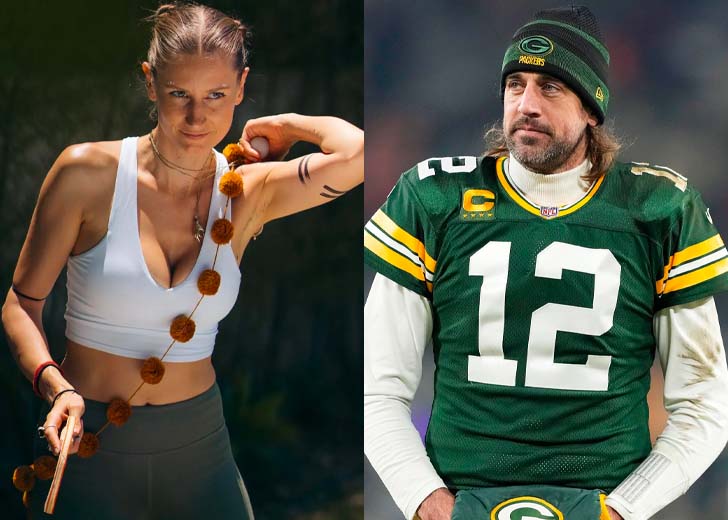 Blu is the host of the DeJá Blu podcast.

Aaron Rodgers, an American football quarterback who plays for the National Football League’s Green Bay Packers (NFL), is rumored to be in a new relationship.

After parting ways with his ex-girlfriend Shailene Woodley, he met a new partner named Blu, also known as “Blu of Earth.”

Rodgers has always had a thriving love life. After Woodley’s relationship with him was made public on social media, the fans lost their temper. However, when they recently split up, the news upset many people.

The star quarterback appears to have moved on and is now involved with an alleged “witch.” Keep reading to know more information about his love life.

Who is Aaron Rodgers dating now?

Rodgers is now dating Charlotte Brereton [also called Blu] after breaking off his engagement to Woodley; however, the lady is famously known as “Blu of Earth.”

The dating rumors spread after these two people were seen together with a group of individuals in multiple places. Following that, social media users began to speculate that Rodgers and Blu were dating.

However, no official statement has been made about when their relationship began — or if they are actually dating.

Blu, or Brereton, is an American podcaster, social media influencer, lifestyle blogger, author, and entrepreneur. She is well-known across the country for her fantastic podcast broadcasts. She is also one of the co-founders of florescence.earth.

According to her Instagram, Blu is currently the host of Deja Blu podcast programs. Blu has 94K Instagram followers and is very active there. Her account already has 1121 posts.

The woman wrote on her podcast’s Instagram page, “A clean reservoir of consciousness from which souls thirsty for purity, relief, and love can drink.”

Similarly, florescence.earth’s Instagram bio reads, “A Modern Mystery School for Women to Reclaim the Magical, Radically Authentic, Wise, Wild, Unapologetic You.” She has mentioned the course link on her Instagram account.

She posts excerpts from her podcast on her personal Instagram and occasionally shows off her guitar and singing abilities.

Furthermore, there was a rumor that Rodger’s new girlfriend Blu was a witch. Later, she responded to the allegation in an Instagram story, writing, “Ps… My name is Blu. I am not Blu of Earth,” and “I do not identify as a witch. You guys are hilarious.”

Rodger was engaged to The Fault in Our Stars actress Woodley. He called off his engagement to his fiancée in February 2022. Their breakup is said to be the result of competing for work commitments. The couple began dating in July 2020.

Before that, he dated professional race car racer, Danica Patrick. Danica admitted in an interview that she is his staunchest supporter.

He also has had relationships with several celebrities, including Destiny Newton, Jessica Szohr, Hillary Scott, and Julie Henderson.