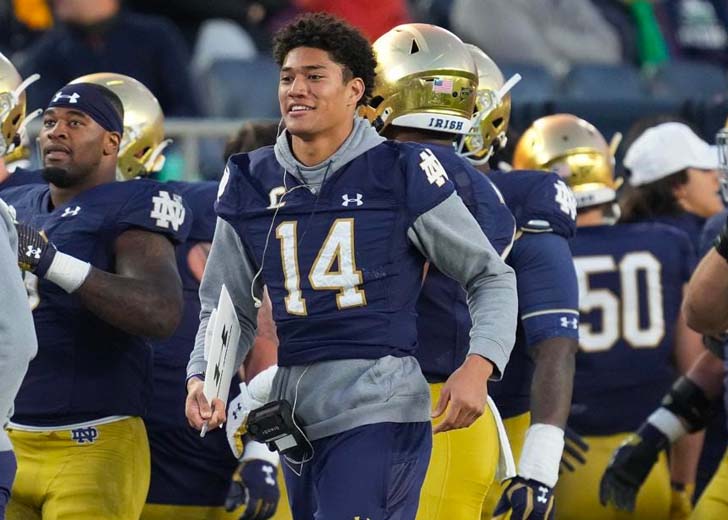 Kyle Hamilton was inspired by his family to pursue sports.

For many people, their parents are their biggest inspiration. The same is the case for Kyle Hamilton, whose family hugely inspired him to pursue a career in sports.

The 2022 NFL Draft introduced so many amazing football players to the world. One such player was Kyle.

He initially played college football at Notre Dame, where he had proven himself to be a force to be reckoned with. He was named a consensus All-American, an honor given annually to the best college football players in the USA.

He was expected to be drafted in 2022. And rightfully so, the Baltimore Ravens drafted him in the first round.

Kyle was born on March 16, 2001, in Heraklion, the capital of the Greek island of Crete. He was born to his mom Jackie Hamilton and his dad, Derrick Hamilton.

Similarly, he has an older brother named Tyler Hamilton. Jackie is South Korean, whereas Derrick is Black —  making the Hamilton siblings biracial.

Kyle told Yahoo! Sports that he was a “racial rainbow.” He clarified, “My mom is Korean, my dad is Black, my mom is from South Korea. My dad is from Mobile, Alabama. I grew up in Atlanta. I was born in Greece. And then I went to school in Indiana.”

He pointed out that being a “racial rainbow” made him a chameleon who could fit in with many cultures. It gave him a different perspective, opened his eyes to different cultures and taught him to be respectful to everyone regardless of their religion, beliefs, or even food.

Jackie initially worked as a professional painter specializing in furniture, faux finishes, and murals before becoming a human resources manager.

Derrick, on the other hand, is a well-known basketball player. He played as a small forward for the Golden Eagles during his time at the University of Southern Mississippi.

The New Jersey Nets later selected him, but his contract was never fulfilled. He eventually went on to play for several European leagues abroad.

Even though Kyle’s father has had a lengthy career in sports, it was his older brother Tyler, who is four years Kyle’s senior, who truly got him interested in football.

According to NDInsider, Kyle fell in love with football at the age of just 3 when his brother joined a little league. Unfortunately, the NFL player could not join the league because of its rule.

As a result, he had to put his desire on hold until he was six. His passion for athletics persisted throughout high school when he went through a 7-inch growth spurt that improved his performance and made his aspirations more of a reality.

Tyler told the tabloid that Kyle was “always good at everything.” Tyler followed in their dad’s footsteps and became a basketball player.

However, he had to do hard work to be successful when the was young. He said, “when I was younger, stuff came a little bit more difficult to me at times, specifically with sports.”

But Kyle, unlike his brother, was born with natural talent. Tyler noted that Kyle played lacrosse for a year just because the latter wanted to.

He pointed out that Kyle “never touched a lacrosse stick in his life, goes out, makes the team, and actually gets playing time.”

Kyle has a seemingly limitless variety of abilities. At an early age, he began outperforming his older brother at “Call of Duty” video games.

Similarly, he is skilled in ping pong, pool, and bowling. The newest leisure activity that Kyle consistently dominates is golf.

In 2021, when Kyle went home for the summer, he played golf almost every day. Tyler said, “He’s ridiculous at golf. It’s not even fun playing with him. He’s so strong, he doesn’t even use his driver.”

But regardless of being talented in all sectors, Kyle was passionate about football and continued to build his career in the field.

He did his junior season at Atlanta’s Marist School. After that, he settled down with Notre Dame, and since the 2022 NFL draft, he has been playing for the Baltimore Ravens.