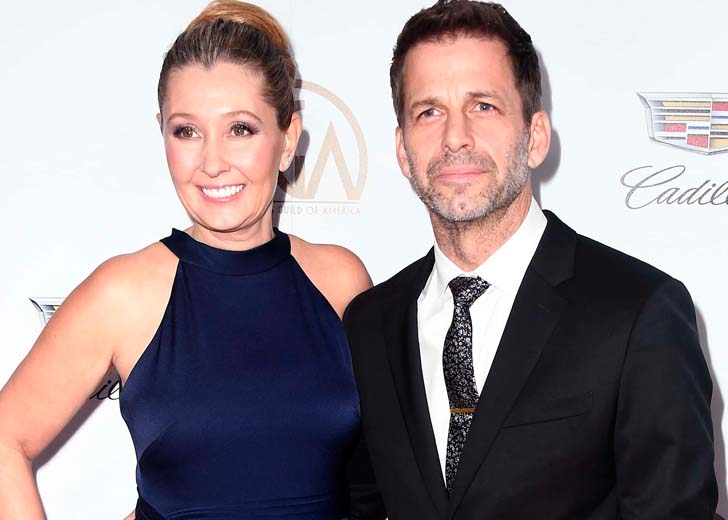 Zack Snyder is a talented American film director best known for his works in the DC movies like Man of Steel, Batman v Superman: Dawn of Justice, and Zack Snyder’s Justice League. He has also served as an executive producer for several DC movies.

Some of his other directorial credits include Dawn of the Dead, 300, Watchmen, and Army of the Dead. As of now, he is finishing up the post-production works for Army of the Dead: Lost Vegas and working on other movies like Rebel Moon, Deadshot, and Planet of the Dead.

While Zack relishes a flourishing career, with millions of fans worldwide supporting his works, he also has maintained a stable and blissful marital life. The Green Bay native director is currently married to his second wife, Deborah Snyder (nee. Johnson), a fellow film producer.

The now-married couple first met in 1996 when Deborah hired Zack to direct an advertisement for the sporting goods company Reebok.

At that time, their relationship was strictly professional, and nothing happened between them. Part of the reason behind that was both of them were committed to someone else; Zack to his first wife Denise Weber and Deborah to her then-longtime boyfriend.

Zack Snyder with his wife Deborah Snyder at the premiere of ‘Batman v Superman: Dawn of Justice.’ (Photo: Twitter)

Zack did that commercial, and the two never talked again until 2002, when Deborah hired Zack for another commercial for Soft & Dri deodorant in New Zealand. Between their first and second meeting, a lot had changed in their personal life; both of them were single.

However, Deborah was unaware of the fact that Zack had divorced Weber. On their first night in Auckland, they sat down for dinner, and at that time, Zack told her he was single. “Oh. Really?” Deborah recalled her statement to the New York Times in 2004.

During the same interview, Zack recalled what he thought of Deborah when he first met her. He said, “She was a bubbly, beautiful girl, who was sharp and on it.”

Returning to their relationship, they were already in love by the time Zack completed the filming of the commercial — the shoot lasted two weeks. Afterward, they continued to communicate and travel to each other’s homes — Zack lived in Pasadena, and Deborah resided in New York.

In January 2003, the 56-year-old filmmaker began filming his movie Dawn of the Dead in Toronto, Canada. And by that time, his bond with Deborah was so strong that she used to visit him once every weekend.

Their togetherness took a new turn on September 25, 2004, as they walked down the aisle at St. Bartholomew’s Episcopal Church in Manhattan, New York. Their wedding was officiated by Rev. David Stout, and family and close friends attended the ceremony.

After getting legally married, the couple took a double-decker bus to their wedding reception held at the Angel Orensanz Foundation on the Lower East Side.

At the time of their wedding, Zack was a father to six children; four with his first wife and two from his former relationship with Kirsten Elin.

Zack Snyder and Deborah Snyder on their relationship

After getting married, the two did many things like opening their own production house, Cruel & Unusual Films, in Burbank, California. Another thing they did was balance their professional and personal life.

Over six years after they got married, in February 2011, Zack and Deborah sat down with the New York Times, where they opened up about many things, including their married life. The outlet mentioned that the duo regularly show their love for each other.

Likewise, Deborah mentioned that she was content with what she had and said, “Now, I’m just content being with Zack, having my dogs, my family, my friends at my house. I’m not looking for something else.”

Zack then said that he wouldn’t have directed Man of Steel if Warner Brothers hadn’t hired her as one of the producers, saying it would have been “a deal breaker.” “Our relationship is husband and wife, director and producer. My wife is my best friend. I trust Debbie’s taste and way of navigating the world.”

As he went on, he said, “Directors go away to create for eight months, and if your spouse isn’t involved, it puts a lot of pressure on the marriage, because the director is having these intimate life experiences that you can’t relate to. During the process of making a movie you have to bond with those people.”

“It has to bring people really close to each other. You have to unite to get it done, and there’s a lot of time between takes, and you sit down, and you talk about your life,” Zack added.

And when the outlet asked Deborah if she is afraid of on-set romances, Deborah had a firm answer: “Listen, if there’s going to be an infidelity, there’s something wrong with the relationship. But if you’re apart for several months, that definitely puts strain on the relationship.”

Zack’s vow of taking care of his wife “in sickness and in health” was tested in September 2007 after Deborah fell sick for weeks in Vancouver, British Columbia. He recalled those moments, “When I met Debbie, I thought she was this amazingly powerful woman, and when she was sick, you learn that we need each other.”

“I’m warmed by the fact that she needed me in that way, and I could be there to ease any little bit of pain. The invincible woman is still there. It’s not about a physical thing. We learn that we can all lose our health, briefly, and you learn that someone is there to take care of you,” he concluded.

The interview also clarified that Deborah had accepted Zack’s six children as her own. And when she was asked if there would be seventh children, Deborah replied, “Kids are not out of the question. We shall see.”

Together through a rough patch

Zack and Deborah’s relationship was tested the most when the director’s daughter, Autumn, took her own life in early 2017. Autumn was one of two children adopted by Zack and his first wife.

The loss of a beloved child was a hard pill for the married couple. To cope with the loss, the duo even took a two months break from the post-production work from the highly anticipated DC team-up movie Justice League.

However, that much of short period wasn’t enough to grieve the loss of an important family member. Thus, Zack and Deborah decided to step down from their responsibilities in the film and handed them over to Joss Whedon.

At that time, Zack told The Hollywood Reporter, “The demands of this job are pretty intense. It is all-consuming. And in the last two months, I’ve come to the realization … I’ve decided to take a step back from the movie to be with my family, be with my kids, who really need me. They are all having a hard time. I’m having a hard time.”

After that, Zack began healing from the tragic loss with his wife and other family members by his side, although the hollow remains there forever.

Later, when Zack presented Zack Snyder’s Justice League in 2021, he put up the words “For Autumn” before the end credits rolled out. Furthermore, there was a billboard of “you are not alone” inside the film to promote the American Foundation for Suicide Prevention.