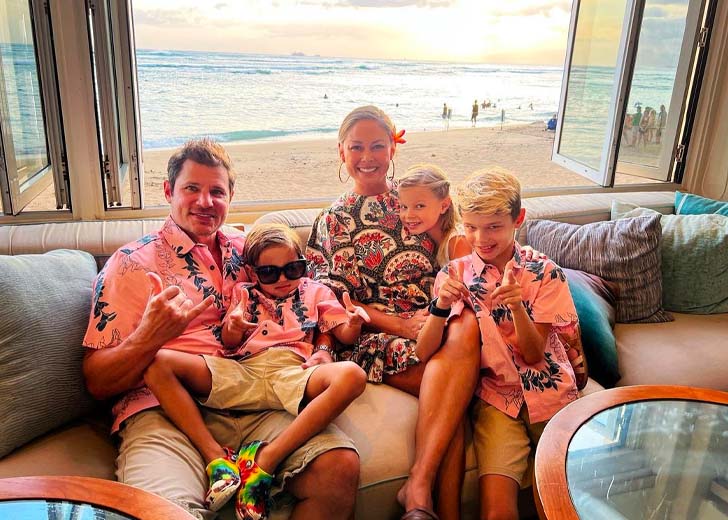 The couple met each other in early 2000s.

Vanessa Lachey and her husband, Nick Lachey, are still going strong after more than a decade of marital bliss.

The couple first met each other during one of Nick’s multiple appearances on Total Request Live, which Vanessa hosted from 2003 to 2007. But nothing happened at that time as Nick was committed to someone else.

At the time, the American singer was married to his now-former wife, Jessica Simpson. And months after Nick and Simpson announced their split in November 2005, things started to become romantic between Nick and Vanessa.

Firstly, Vanessa starred in Nick’s music video for the song ‘What’s Left of Me.’ And in one of the episodes of MTV Making the Video, released in April 2006, the two were seen flirting. “How do we rehearse? Do we go to your trailer?” Vanessa jokingly told Nick.

And Nick replied, “I think we just kinda have to do what they call ‘improv.’ Wing it. I don’t think there’s rehearsal time.” Following that little flirty segment, the TV host later claimed in front of the camera that Nick is a gem and she has a mini-crush on him.

By 2006, it was obvious to everyone that Vanessa and Nick were an item, and by December 2006, they had made their relationship public by sharing an on-air kiss at MTV’s New Year’s Eve show.

In January 2007, the new couple was rumored to be split; however, Vanessa denied those speculations to US Weekly. She said, “Sorry. We are still very much together!”

Their togetherness continued for a couple of years before they briefly parted ways in June 2009. At the time, US Weekly confirmed their split, with a source telling the outlet that it was a mutual split and they were still friends.

Vanessa and Nick’s breakup didn’t last long, as they reconciled their romance by August of that same year. The twosome was even caught having a PDA-filled moment at the Los Angeles-based bar, The Dime.

In September, the singer said, “We’re trying to figure things out. I don’t pretend to know what the future holds, but everything’s good. Vanessa’s a good girl, and I care about her a lot.” In the next month, Vanessa and Nick were officially back together.

“I am happy in a relationship. I was single for a minute there, and then we’ve kind of patched things up,” Nick said during his appearance on Good Day Philadelphia.

Over a year after they got back together, they put a ring on their togetherness. In November 2010, Nick went down on his knees and proposed to Vanessa with a platinum Asscher-cut diamond ring on his hands. She said yes, and they got engaged.

The couple then released a joint statement to US Weekly stating, “We’re excited and incredibly happy about our engagement, and we look forward to a wonderful future together.” “They’re so happy, doing great. Thrilled about it,” another source added.

Vanessa Lachey and her husband Nick Lachey dressed up for the 2021 Emmys (Photo: Instagram)

Eight months later, on July 15, 2011, Vanessa and Nick exchanged the wedding vows on Necker Island, Sir Richard Branson’s private island in the British Virgin Islands. Only a few friends and family were invited to attend the magical ceremony.

After their wedding, Nick spoke to reporters and said, “[Vanessa and my wedding is] for us, for the people in our lives who are close to us and mean a lot to us. That’s the way we wanted it, and I’m happy we’re able to do it that way.”

The two later went to St. Bart for a romantic getaway honeymoon.

Less than a year after tying the knots, Nick announced that he and Vanessa were expecting their first child. The singer made the announcement during his appearance on Live! With Kelly in March 2012.

Vanessa gave birth to her first child, a son named Camden John Lachey, on September 12, 2012. “We are incredibly proud to announce the birth of our beautiful baby boy, Camden John Lachey. Love has truly been redefined for both of us,” the duo said.

After that, the lovebirds welcomed two more bundles of joy, expanding their family to five. Their second child, a daughter named Brooklyn Elisabeth Lachey, was born on January 5, 2015. And on December 24, 2016, they welcomed their third child, daughter Phoenix Robert Lachey.

Since welcoming three kids, Vanessa and Nick’s responsibilities have been increased by a greater margin. Nonetheless, the married couple has always done their best to raise their kids, manage their profession, and give quality time to each other.

Vanessa Lachey and Nick Lachey with their children in Orlando, Florida (Photo: Instagram)

However, it isn’t always sunshine and roses for the duo as they have to work to make it work. Explaining more, Vanessa said, “I see it as a working marriage and don’t mean like a job working, but we have to constantly work at it.”

“I was just telling my girlfriend last night, we don’t settle or run; we go head-on with the problem. We communicate, we talk things through, and we listen to the other person. We both know exactly what we want out of life, and that’s each other, so we’re gonna make it work.”

And when they feel it right, the duo go on a no kids allowed vacation. Vanessa and Nick further bonded over the recent quarantine period. “I think we’ve had our highest highs and our lowest lows as a couple,” Vanessa told US Weekly.

“And it’s forced us to communicate better and things that we thought we kind of had under control or tools we used to use in our relationship. When you’re forced to be together 24/7 with three little ones, who also, you know, don’t really understand what’s going on.”

She continued, “It kind of makes you have to reprioritize. I mean, we’ve been together for 14 years, married for nine, and we still put our family first. I need different things now than I did 14 years ago. And he does as well.”

Going by all that, it’s already clear that the duo has been there for each other in happy and challenging moments, which has strengthened their togetherness. One of the tough instances was during Nick’s split with his first wife, about which Vanessa opened up a bit in April 2022.

During one of the episodes of the Netflix show The Ultimatum, the actress talked about her feelings about dating Nick months after his separation from Simpson. She said, “He was literally in a very public marriage and a very public divorce.”

As of now, Vanessa and Nick have been married for more than a decade, 11 years to be precise. And in these 11 years, they have built a blissful home filled with joy and, of course, their three children.